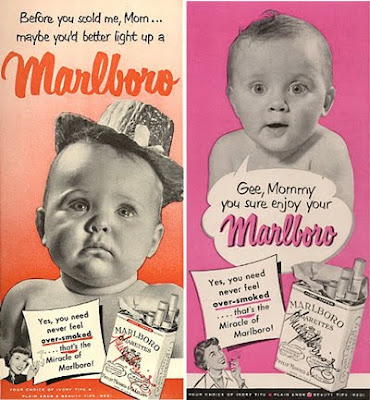 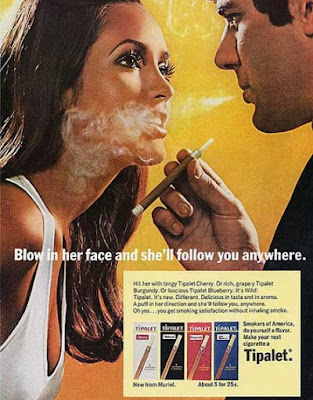 In case you've been wondering where I've been over the past few days (for I am sure my hordes of readers will be worried about me), I've been trying to pull myself out of a funk of non-writing, based not so much on the work itself as the miserable process of trying to get it noticed.

So I'll do something else for a change! Something besides ordering Minnie Mouse panties (size 4 - they're not for me) or out-of-print books or cheap DVD sets on-line.

These weren't as fascinating as I'd hoped. I love old ads - maybe it's the reason I watch Mad Men with such fervor (that, and Don Draper's magnificent body, often depicted half-nude). The reason being, this was a very sloppily-compiled set. Ads were slapped on the discs with very little care for the quality. Ironically, the '50s ads were often in pristine condition, in the kind of crisp black-and-white I enjoy in old movies.

The ads from the mid- to late '60s were atrocious, barely discernible in the blur of neon orange. You have to wonder what happens to color film over the years, if it rots or melts or what. I skipped over these very quickly. They never should have been included.

Ads are a-spose-ta tell us everything about a culture at any particular moment. Aren't they? Women all seemed to want to look like Donna Reed, her blonde puffed helmet hard enough to repel schrapnel. One hair spray ad claimed that "your hair will still feel like hair", as if that were an aberration. Men's hair products were simply disgusting, rendering a decent head of hair into a slick of oily black sludge full of comb-tracks. Supposedly, women loved this: "they'll love to run their fingers through your hair!" Eeeiiiicccccchhhhhhhhk-k-k-k.

I didn't realize before how obsessed these early ads were with proper meals, nutrition through the warped lens of the 1950s. The words "wholesome" and "nutritious" popped up everywhere. Vitamins were mentioned constantly. There were modern-day wonders like canned zucchini (hmm, what's a zucchini?) and Tropi-Kai Mixed Hawaiian Fruits (? Probably another variation on fruit cocktail. Mmmmmm, those gaudy red maraschino cherries.)

"Eat well. . . but wisely," the authoratative male voice-over advises us. Right. Jell-o was nutritious, apparently, as was every kind of sugary cereal (all made in Battle Creek, Michigan - oh, how I remember sending away those box tops for a plastic fire engine!). This strange guy, a nutritionist called Euell Gibbon, told us that all sorts of bizarre things were edible (holding a cat-tail in his hand), then said he loved Grape Nuts. Did no one else see the irony?

No one knew how to pronounce "protein": it was "PRO-tee-an" (a term no doubt conflated - remember that term, boys and girls? - with "protean"). This was a whole different shoe size. What sort of yearning was lurking under the glossy surface? You judge.

Then came the creme de la creme of astonishing advertising: the cigarette commercial. All these had very catchy jingles, and mostly depicted young people running along beaches with dogs. "Kent. . . satisfies best," "Come all the way up to Kool", "Winston tastes good like a (bop-bop) cigarette should." This one has become infamous on the 'net because of a cartoon ad of Fred Flintstone and Barney Rubble smoking in the back yard while their wives slave away at the yard work. At the end of the show Fred lights Wilma's cigarette while he sings the jingle wildly off-key, and she takes a luxurious drag. The shot of Bedrock at night while the credits roll is overwhelmed by a giant sign that says "WINSTON". Can't hurt the little buggers, can it?

Camels brag that they send hundreds of thousands of FREE cigarettes to veteran's hospitals every year. Hospitals. Where most of the men lie dying of cancer? Denial was rife in the ads, constantly mentioning how mild and easy on the throat these sticks of dynamite were. Some were even recommended by doctors. A particularly tough and virile man (and most of the men were tough and virile, no pansy-ass fags here) claimed, "It's a treat, not a treatment."

Anyway, the cigarette ads put me in a stupor after a while, so I had to dwell on something else: the odd popping up of celebs, some of whom were not yet famous. Gene Wilder (his nebbishy voice unmistakeable) did two voice-overs, one for Alka-Selzer ("Ah! The blahs!"). Alan Arbus, the psychiatrist on M*A*S*H showed up. I swear I heard Mel Blanc's voice more than once (the Frito Bandito?).

The brilliant Buster Keaton, a man who worked constantly until his death at nearly 70, did a perilous pratfall backwards off a platform, making us wonder how he ever survived.

Jack Gilford did his charming thing ("When it comes to Crackerjack, some kids never grow up"). A very drunk Arthur Godfrey did a Lipton's Chicken Soup ad as part of his show (for in the past, hosts had to do the ads). "The chicken is there. You might not see it, but it's there."

After a while the whole thing was a blur of impressions, some of which I remembered from my childhood: "Gaylord, when you pull his leash he walkety-walkety-walks with you (arf, arf!)". "Mystery Date". Lucy and Desi, looking at each other fondly and smoking. Sugar Bear sounding like Dean Martin. A toy called the Great Garloo, some sort of remote-control robot on a long cord. And oh, Chatty Cathy. The doll from hell!

You can't see the angst and despair. But it's there.