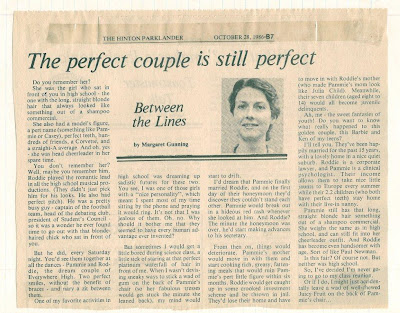 Sometimes I'm like, I mean. I'm like, and he's like, and I'm. An icon, I mean. Iconic.
There. Now that I've got(ten) that out of my system. . . 'Jever wonder why it's so hard to throw some things out?
Like the bouquet from your wedding or something, now withered into a crumbling yellow horror with cobwebs and life forms living in it?
Hey?
So here's mine, what I can't throw out. Old columns. I started writing columns for teeny community newspapers in the mid-'80s, and soon became hooked. I kept them all. I was afraid, if I didn't, I would disappear (or at least the writing would).
I have kept everything I've ever written for publication. Over 25 years of weeklies, not to mention all the dailies and magazines, that's not just hundreds - it's thousands.

Okaysothen. So then, my best friend, the sister of my soul, the sister I never had coz my own sister is a poisonous banshee (and I hope she reads this!), the sister God sent me when I was about to fall apart, is going through a hard time about her high school reunion. She phoned me about it the other day.
Say the words "high school reunion" to the average sane person, and it will have about the same effect as the word "biopsy". It is not a good thing.
For you will see all the thrivers still thriving, or pretending to. Everyone else will have died, or won't show up.
Myself, I am sure nobody would remember me. Jeez, four years of my life! I was a cipher who drank on the weekends and attracted 35-year-old married men. A freak.
I got a whole novel out of it, Mallory (Turnstone Press - I'm afraid you'll have to get it used).
But in this crumbling old column, I played it for laughs. I can't find any other way to transcribe it except to take a quill pen and run it between my legs (oops) and write the damn thing out. But here it is, Margaret Gunning's Between the Lines, published in the Hinton Parklander on October 28, 1986.
Do you remember her?
She was the girl who sat in front of you in high school - the one with the long, straight blonde hair that always looked like something out of a shampoo commercial.
She also had a model's figure, a pert name (something like Pammie or Casey), perfect teeth, hundreds of friends, a Corvette, and a straight-A average. And oh, yes - she was head cheerleader in her spare time.
You don't remember her? Well, maybe you remember him. Roddie played the romantic lead in all the high school musical productions. (They didn't just pick him for his looks. He also had perfect pitch.) He was a pretty busy guy - captain of the football team, head of the debating club, president of Student's Council - so it was a wonder he ever found time to go out with that blonde-haired chick who sat in front of you.
But he did, every Saturday night. You'd see them together at all the dances - Pammie and Roddie, the dream couple of Everywhere High. Two perfect smiles, without the benefit of braces - and nary a zit between them.
One of my favorite activities in high school was dreaming up sadistic futures for these two. You see, I was one of those girls with a "nice personality", which meant I spent most of my time sitting by the phone and praying it would ring. It's not that I was jealous of them. Oh, no. Why should it bother me that they seemed to have every human advantage ever invented?
But sometimes I would get a little bored during science class, a little sick of staring at that perfect platinum waterfall of hair in front of me. When I wasn't devising sneaky ways to stick a wad of gum on the back of Pammie's chair (so that her fabulous tresses would get stuck the minute she leaned back), my mind would start to drift.
I'd dream that Pammie finally married Roddie, and on the first day of their honeymoon they'd discover they couldn't stand each other. Pammie would break out in a hideous red rash whenever she looked at him. And Roddie? The minute the honeymoon was over, he'd start making advances to his secretary.
From then on, things would deteriorate. Pammie's mother would move in with them and start cooking rich, greasy, fattening meals that would ruin Pammie's pert little figure within six months. Roddie would get caught up in some crooked investment scheme and be thrown in jail. They'd lose their home and have to move in with Roddie's mother (who made Pammie's mom look like Julia Child).
Meanwhile, their seven children (aged eight to fourteen) would all become juvenile delinquents.
Ah, me - the sweet fantasies of youth! Do you want to know what really happened to this golden couple, this Barbie and Ken of my teens?
I'll tell you. They've been happily married for the past 15 years, with a lovely home in a nice quiet suburb. Roddie is a corporate lawyer, and Pammie is a clinical psychologist. Their income allows them to take nice little jaunts to Europe every summer while their 2.2 children (who both have perfect teeth) stay home with their live-in nanny.
Pammie still has that long, straight blonde hair like something out of a shampoo commercial. She weighs the same as in high school, and can still fit into her cheerleader outfit. And Roddie has become even handsomer with age. Sort of like Paul Newman.
Is this fair? Of course not. But neither was high school.
So, I've decided I'm never going to go to my class reunion.
Or if I do, I might just accidentally leave a wad of well-chewed Juicy Fruit on the back of Pammie's chair. . .
Posted by Margaret Gunning at 12:30 PM 1 comment: