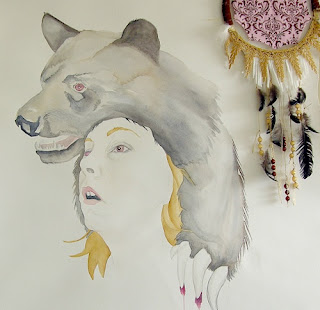 I looked it up in Wikipedia, that unassailable source of truth, and it said something like "to bring together, mold or fuse." This isn't the kind of word you use every day in polite company ("Let's conflate our wedding plans, shall we, dear?"), but it crops up once in a while, and I just enjoyed a particularly interesting (to me, anyway) example of it.
The internet long ago molded or fused with my hazy memory of old book titles, things so out of print you used to have to dredge them up in rare book stores for hundreds of dollars. Now they're lying around in Amazon for one cent (I'm not kidding - I guess they're in a warehouse somewhere and they just want to get rid of them). I buy most of my used books this way, paying only the shipping and handling.
As long as they hold together, they're OK by me. When they come, I get to smell that musty butter/bug/shelf smell of yellowed, slightly crumbly paper again, the Book Smell that will very soon become obsolete (not that anybody cares). I get to read books that in the 30 years since I've read them have mysteriously turned to
dust.
The only down side is that sometimes I only remember part of a title, or part of an author's name, or assign the wrong author to a title. This necessitates a tangle of detective work that would be impossible without the net.
The other night I was propped up in bed reading the Oprah bio by Kitty Kelley - a nice, fishy dish of Meow Mix that makes perfect bedtime reading as a slice of modern-day mythology. Kelley kept referring to an author named Gloria Naylor, who had written The Women of Brewster Place (later made into an Oprah TV
miniseries).
I kept thinking: Naylor. Naylor. Naylor.
Naylor was the name of an author I used to read, oh, eons ago! Didn't she write a book called Psyche, all about a little girl who had been abducted? I tried to find it. Naylor, Naylor, Psyche. You can imagine what I found under "psyche": a host of bafflegab about the human "mind", "soul" or whatever it is that floats in the air around us, completely independent of the brain. There must've been thousands of entries about "the psyche", but no mention of Naylor.
Then: pay dirt! On my millionth try, I found the name Phyllis Brett Young, and her hundredth book, written in the '60s, was called Psyche. Nothing at all to do with Naylor, for sure, but at least I had her name and knew I wasn't imagining the book.
But another title kept nagging at me, and I was sure it had been written by the same author.
It was called Revelations, a well-written novel about a young woman growing up in a rural Fundamentalist family who has a secret affair with a phony evangelical preacher. I remember a couple of things about it: one, that the main character's nasty older sister at one point exclaimed, "There's hay on her back!", and two, it said on the cover, "Soon to be a major motion picture starring Sally Field!"
Hot on the trail of Phyllis Brett Young, I googled Revelations, and found even more stuff that wasn't relevant at all. There were hundreds, maybe thousands of books called Revelations, including the book of Revelations. I was lost in the world of defunct novels, at a dead end.
Then I thought back. Gloria Naylor. Phyllis Brett Young. Was it possible that I had, well, not quite conflated but somehow de-conflated the two? In muddling around the 'net, I came across a name that finally rang the bell: Phyllis Reynolds Naylor.
Yes, there was a Phyllis, and a Naylor, and they belonged
together!
Phyllis Naylor turned out to be an incredibly prolific children's/young adult author who had somehow popped out this novel during her spare time. It was listed under used books in a million places (and I ordered one, lusting after that musty antique smell), but when I found lists of all the things she'd written (over 200),
Revelations wasn't there.
At the same time, I know it was the same Phyllis Reynolds Naylor. I think the busted movie deal must've caused her to want to bury the book. It's too bad, because though it's simply written, it has a heart, exploring a delayed awakening of sexuality in an honest, compassionate way.
I wonder what got in the way of the movie. Sally Field would've been around 30 or 35, the perfect age for the "spinster" who stayed at home to look after Grandpa after his stroke. Sally Field doesn't get enough play these days except in Boniva commercials (you know, for menopausal women whose bones are crumbling away to dust). I remember her ferocity in Norma Rae, jumping on her desk with that piece of cardboard that said, "Strike!".
Sam Shepard could have played the preacher, natch. It would have worked. Do they do that in Hollywood: blare it around before anything is signed? Or WAS it signed, and fell through? I wonder how many sure things fall
through in Tinseltown.
Anyway, from Gloria Naylor, to Phyllis Brett Young, to Phyllis Reynolds Naylor. This sounds like six degrees of separation. But I like conflation better, with its sense of blowing up some vast balloon or iridescent bubble of the imagination.
Posted by Margaret Gunning at 8:46 AM 2 comments: