Everyone knows it's slinky 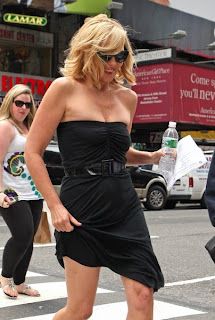 So what's the connection between the image on the left, a coiled spring, an insufferable racket, and bad popcorn?
I'll tell you.
When I'm in the mood for a bad movie, there's no stopping me, so paying about $25 at my local cineplex (named Scotiabank, after the bank that took it over from Paramount) wasn't quite the horror I thought it would be. I wanted some sparkling entertainment, some sleazy laughs. I wanted to see The Girls again.
I did watch Sex and the City. I DO watch it once in a while, '90s relic that it is. The highly improbable sexual frolickings of Carrie, Miranda, Charlotte and Samantha were usually good for a guffaw, and once in a while you'd even see a flash of nudity.
But now the franchise has moved on to big box movies. They should've stayed on that other box, the smaller one, but never mind. This has very little to do with a pretty bad movie that went on far too long (2 1/2 hours, when a comedy should clock in at about 90 minutes, tops).
For an early matinee, the place was unusually crowded, and I had to climb like a mountain goat to find a seat, popcorn and drink smashed against each other so I wouldn't lose my purse, dripping umbrella (this is Vancouver) and 5000 napkins to keep my jeans from being saturated with grease.
Finally found a seat up in the gods, top row, with a young couple entwined just on my left. I mean entwined, like those photos you see of mating snakes.
And then.
Bom, bom, bom. . .
What walks downstairs, without a care, and makes a slinkety sound?
I swear! I could hear that theme song as a bizarre noise sank into the left side of my head.
Shhhhhhhhh, shhhhhhhh, shhhhhhhh, shhhhhhhhh.
Shhhhhhhhh, shhhhhhhh, shhhhhhhh, shhhhhhhhh.
This sounded for all the world like the metallic shoop-shoop of an ancient Slinky. But the thing is, it went on and on. And on. And on. And on And Andandnadndndnndd
I had to peek, to see what the hell was producing that sound. The guy was sitting on the left, with his bare forearm on the seat rest.
The girl was rubbing his arm.
And rubbing his arm.
And rubbing
And rubbing
And rubbing
Swoosh, swoosh. Shoop, shoop. Shhhhhhhhh, shhhhhhhhh. Shhhhhhhhh,
shhhhhhhhh.
Now I've sat beside or behind some humdingers, mucus-snorters, knuckle-crackers, popcorn-macerators, but - never this. A "rubber".
It might have been OK, well, more or less, if she'd stopped at some point. But she didn't. She rubbed his forearm all through the previews. She rubbed his forearm all during the opening credits.
SHE RUBBED HIS FOREARM ALL DURING THE GODDAMN FUCKING MOVIE.
The same patch of forearm. Her clothes were some sort of noisy nylon that shhhh-shhhh-ed when she moved, and every few minutes she squirmed around in her seat like a two-year-old being forced to sit still.
I tried everything: shooting them poisonous glances (they probably just thought I was nuts). Eating my popcorn really loud, except that there was someone on the other side eating hers even louder.
An hour went by. Shhhhhhhhh, shhhhhhhhhh, shhhhhhhhhh, shhhhhhhhh.
An hour and a half. The Girls went to Abu Dhabi or Timbuktu or somewhere, to get laid. It wasn't funny.
How could this guy have any skin left on his forearm? Why was his forearm suddenly an erogenous zone? Was this just a promise of another kind of rubbing that would happen after the movie? What the fuck was wrong with these people?