OK, so. Here is my dream car 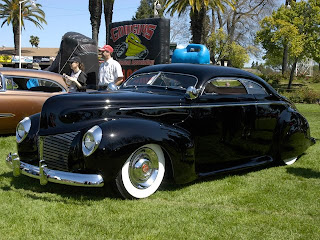 OK, it was something like this. But really, not even close.
It was like something out of a Popeye cartoon of the '40s, the really old ones, I mean the Fleischer, good ones. (I'll write about them later.) Cars already looked like cartoons then, like giant bubbles, bulbous.
And huge.
As I sit here slurping down a giant mug of Red Rose tea and eating McVitie's Digestive Biscuits (can you tell I'm Canadian?), I'm trying to piece together just what happened. This was an Event such as I only experience a couple of times a year. A sighting of beauty so sighful, it felt it almost like an affliction until I had told my husband all about it.
I was standing at a bus stop, bored, not expecting anything, vaguely aware of traffic whizzing by. But behind me was a leisurely lane leading (like the alliteration?) to the shopping area: Safeway, Canadian Tire, and other stuff.
I don't know why I turned around. As the Beatles song says, "Had it been another day, I might have looked the other way". But I did turn around, and was assailed by a vision in burgundy and cream.
Burgundy, cream, and chrome. Remember chrome? This vision had a mouth, a rather fierce grille with teeth. There followed a slipstream of shape. A little aggressive at the front, almost like a nose; bulby around the front tires; high roof with absurdly small windows, then. . . a taper.
A waterfall of car, a cascading, almost down to a point. There appeared to be no back wheels at all. The rear of the car sank right down into the pavement.
The colour must've been custom, as I'd never seen anything like it before, the two tones divided by a bar of (more) chrome. This lordly vision slowly drove past me, then turned off into the shopping area. A young guy (I barely saw him - he could've been George Clooney and I wouldn't have seen him) got out and went into the bank.
I stared.
I don't even drive. I hate cars. They belch out poisons. I fear them. I've been almost run over 100 times. What was this thing? Some sort of vintage, obviously, maybe on its way to one of them-thar car shows I never seem to get to. It appeared to sail forth like a giant boat supported by massive pontoons.
The guy came out of the bank, got back into the car and drove verrrry sloooowly over to the Canadian Tire lot, about 50 feet away. I mean, he didn't see me (I'm 56, remember, and thus invisible), but maybe he saw me seeing him (or rather, his car).
He drove away equally slowly. A float in a parade. I felt faint. I didn't want him to go. I wanted to hop in, to tootle around town with him, watching all those dials 'n' things that old cars have (and creaky old leather).
As soon as my senses would hold together, I rummaged out a pen and notebook and tried to draw it. It was hopeless. I tried eight times, then lost my pen on the bus.
My husband can tell, at a glance, the year and make of every car ever made. I am not kidding. I have never stumped him. Sometimes I check it against the internet, but I really don't have to. I described this car to him. I showed him my miserable drawings,
which looked like a car a 2-year-old would play with in the bathtub.
He didn't know what it was.
That was when I began to believe that what I had seen was an apparition. It floated into my consciousness when I least expected it, swanned past me in splendour, then disappeared into the vapour of unreality from which it had come. It un-was, or un-did itself, or something.
Well, we all die, don't we? Why wasn't this lovely thing thrown on the scrapheap in 1941? My only clue was handwritten in chrome on the rear bumper: Mercury.
"Oh, so it was a Ford," my husband said. "Probably 1940. Called a Westerbrook or something like that. Maybe a custom."
Oh, don't burst my bubble. It was a dream.
Posted by Margaret Gunning at 12:46 PM 5 comments: