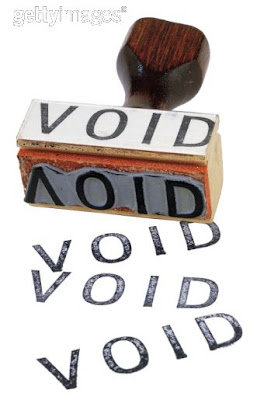 I always try to avoid opening these things. But sooner or later, I have to. I have to get the bad news, and it isn't going to be any better if I wait.

If I get my SASE back (and many agents/publishers still demand that you mail your manuscript or query WITH A SASE: "You do want your manuscript back, don't you?"- an actual quote), it's never good news. Good news comes fast, by phone. Maybe email. Never by mail.

In thirty or so years of writing for print, I've only had two of these. They aren't form rejection letters, which are bad enough to receive after you've put together a thoughtful proposal which boils down hundreds of pages and years of work (and hope - the demon hope!) into a few pages.

It goes like this. When you open the envelope, you see - not a form rejection - but - your own letter, sent back to you in your SASE! What is going on here? And then -

In this case, a rubber stamp. Yes. In the corner of my letter. That was how I received the rejection for my novel, which I still believe is the best thing I've ever written.

The other time, I was (fruitlessly) trying to syndicate a column, which I later found out has to be done by God, not a mortal being. I received my query letter back. The guy had scrawled in pen, right across the body of my letter, "Thanks, but no thanks."

It later occurred to me that at least he had taken pen in hand and written something personal. But the truth is, he probably didn't have a rubber stamp.

If ANY other person in ANY other field of endeavour were treated this way, they'd sue, or quit, or jump off a bridge. Most writers choose Option #3, or just quietly go away, which is what the powers that be all seem to want.

OK then, I've just destroyed my chances of ever appearing in print again, because I am supposed to just quietly swallow all this anguish and embarrassment and failure and learn a lesson in abject humility. But it's OK, because nobody reads this shit anyway! Nor do they cast eyes on a novel that took me years to write, mining the depths of my soul. Which now appears to be worth exactly nothing.
Posted by Margaret Gunning at 11:06 AM

Email ThisBlogThis!Share to TwitterShare to FacebookShare to Pinterest
Labels: despair