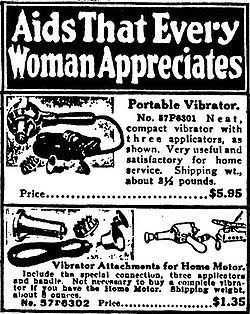 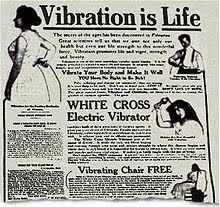 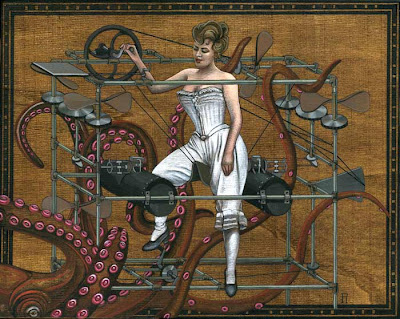 This, from Wikipedia, absolutely made my day. I had never heard of vibrators for sexual purposes until the mid-'70s, and assumed they were a recent innovation. Why was this fascinating bit of medical history censored?
Take it away, boys.

"The history of hysteria can be traced to ancient times; in ancient Greece it was described in the gynecological treatises of the Hippocratic corpus, which date from the 5th and 4th centuries BCE. Plato's dialogue Timaeus tells of the uterus wandering throughout a woman’s body, strangling the victim as it reaches the chest and causing disease. This theory is the source of the name, which stems from the Greek word for uterus, hystera.

"Galen, a prominent physician from the second century, wrote that hysteria was a disease caused by sexual deprivation in particularly passionate women: hysteria was noted quite often in virgins, nuns, widows and, occasionally, married women. The prescription in medieval and renaissance medicine was intercourse if married, marriage if single, or vaginal massage (pelvic massage) by a midwife as a last recourse.

"Rachel P. Maines has observed that such cases were quite profitable for physicians, since the patients were at no risk of death, but needed constant treatment. The only problem was that physicians did not enjoy the tedious task of vaginal massage (generally referred to as 'pelvic massage'): The technique was difficult for a physician to master and could take hours to achieve "hysterical paroxysm." Referral to midwives, which had been common practice, meant a loss of business for the physician.

"A solution was the invention of massage devices, which shortened treatment from hours to minutes, removing the need for midwives and increasing a physician’s treatment capacity. Already at the turn of the century, hydrotherapy devices were available at Bath, and by the mid-19th century, they were popular at many high-profile bathing resorts across Europe and in America.

"A page from a Sears catalog of home electrical appliances from 1918 includes a portable vibrator with attachments, billed as ”Very useful and satisfactory for home service.” Other cures for female hysteria included bed rest, bland food, seclusion, refraining from mentally taxing tasks (for example, reading) and sensory deprivation."
Too bad they couldn't just
lie there on their fainting couch and watch reality TV while stuffing their fat faces with Cheetohs. They could have satisfied all their appetites at once, and squeezed the extra pounds away with one of dem-dar corsets they wore.
I wonder if attitudes toward female sexuality have improved that much: women are either pole dancers in thongs and net stockings, or dutiful but frumpy Moms trundling the kids off to soccer games. Oversexy, or not sexy at all. And what is "sexy" anyway? It all looks pretty stereotyped to me.
On a previous post, I wrote about princesses. So what's the deal there? In all the fairy tales, they were universally virginal and untouched until that amazing First Kiss. First sex is always awkward, in fact it can be downright painful, but somehow, in its fumblingly determined way, the human race has managed it (and managed and managed and managed it).
Has the deck been stacked against female plesure from the very beginning? I'm a slavish fan of Mad Men, the best series I have ever watched. The sharks of l960s Madison Avenue circle one another every week, waiting to lunge for the kill.
But there are domestic dramas unfolding behind the piranha-tank of the office.
Don Draper is the alpha male of the series and the biggest prick the ad world has ever seen. But he does have a redeeming fondness for his 10-year-old daughter Sally, traumatized by her parents' recent divorce and her mother's remarriage to a wealthy man she doesn't
love.
In this past episode, Sally hacks her hair off, causing her mother to slap her hard across the face. In my experience, cutting off one's own hair is pretty close to slashing or burning: it's self-mutilation, and to be slapped for that by your mother is pretty harsh stuff. But then Sally really gets into trouble.
While at a sleepover at a friend's house, Sally watches TV raptly while Ilya Kuryakin of The Man from UNCLE, tied up back-to-back with someone, murmurs in his usual seductive way. We see Sally slowly begin to hike up her flannel nightgown.
And then -
Then her friend's mother bursts in, shrieks at Sally, strongarms her out of there away from her daughter (who slept through the whole thing), and drags her home, telling her mother she was masturbating in public.
I didn't know whether to laugh or cry at the adults' reactions to this news. It was blank disbelief mixed with a kind of repulsion A sort of "whaaaaaat?" thing. Betty Draper even tells her ex-husband, "Girls who do that are, you know. Fast." Sally is promptly packed off to a child psychiatrist to be straightened out.
Oh, you can say this was a long time ago, but I really don't think the reaction now would be that much different. The impression was that, perhaps being a bit young for full-blown sexual feelings, Sally was experimenting a little, curious about her own body and what it was capable of.
This is supposed to be "normal" and "healthy", but do we really see it that way? If you went to a psychologist and said, "My daughter masturbates in public," what do you think they'd say?
I once tried to post something on the Oprah web site that contained the word "masturbation". It appeared for a second, then was deleted. I tried once more, and it was deleted again. Too dirty and offensive to mention,
I guess.
Time to break out the mail order vibrators again?
Posted by Margaret Gunning at 10:12 AM