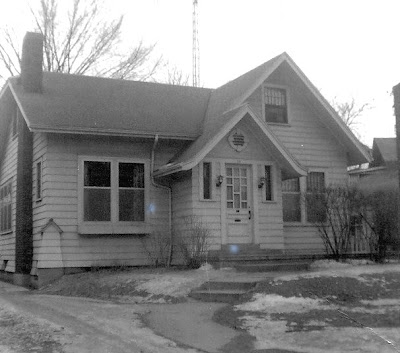 But I just wanted to say. . . my new header photo is NOT by that Painter of Light guy, whoever he was, the one who screwed around all the time. Now that it's up there, it looks just a little TOO phantasmagorical, though I seemingly spent all day getting it to look like that.

This is the original photo, and it's the house I grew up in, the house I spent the first 16 years of my life in. I am sure I had no idea how beautiful it was. It still exists, on 20 Victoria Avenue in Chatham, but it's a doctor's office now and I am sure has been gutted. No more terrazzo floors or gorgeous russet-colored hardwood (covered by WALL-TO-WALL CARPETS, the newest thing!). No more dumbwaiter converted to laundry chute, earth-floored root-cellar in the basement, or sculptured plaster fruit at the base of the chandeliers. And two bathrooms, by God, one up and one down, almost unheard-of then. 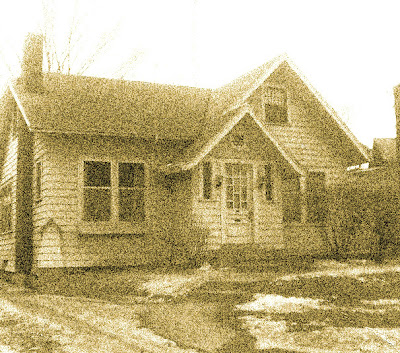 Why is this important? Do people think I am a total idiot? Yes, at least some of the time. I picked the name of my blog, a) to advertise my work (because why the hell else have a blog?), and b) because I wanted a rather silly, Barbie's House of Dreams-type title. So many blogs have clever titles, and for the most part I hate them. So I purposely picked a silly one, though up to now I never used an actual house to illustrate it.

This house, well. It was quite a house, painted sunny yellow. We used to climb up on the roof in the summer, up the TV aerial which was a huge power-station-type thing. We had a big thing with a dial, called a "big thing with a dial"(I guess), and you set the dial and it went "wah-wah-wah-wah-wah" and the aerial turned and you could get Cleveland. 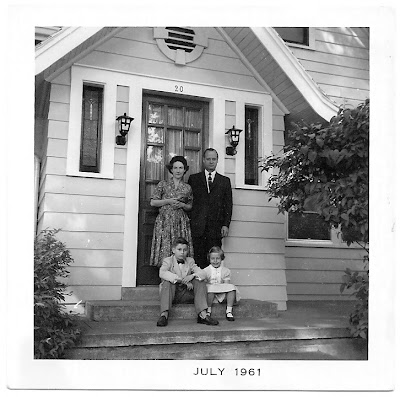 There was also something called UHF. It was on the dial of the TV. I was terrified of UHF. I thought if I ever tuned in UHF, my head would explode. One day I timidly asked my brother, "What's UHF (pronouncing it "UHFFFF")?"

He laughed his ass off and said, "It's U. H. F., stupid. It's some broadcasting frequency that we can't get. Educational or something."

Posted by Margaret Gunning at 11:07 PM