The Victorian corset: it hurts so good!

Why is this woman trapped inside a corset? And why does she look so happy to be there?

In researching the fascinating, slightly kinky topic of the Victorian corset, I came across this amazing quote from one of my favorite actresses.


"Winona Ryder has credited her tight corsets with fueling her performance in The Age of Innocence by allowing her to channel her character's emotional turmoil. The actress insists her restrictive costume allowed her to give an authentic performance as a socialite engaged to a lawyer, played by Daniel Day-Lewis, in the 1993 period drama. 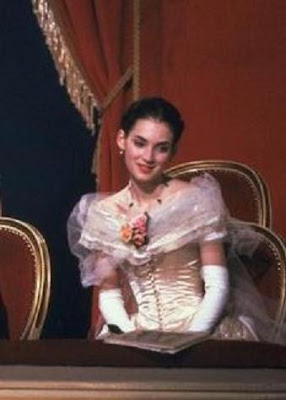 And despite feeling uncomfortable throughout the entire shoot, Ryder admits she is grateful for the painful garments. She tells Britain's Total Film magazine, "The corsets are a tremendous help to the performance, because you're playing a repressed person and you can feel the pain that they endured. My waist had to be 19 inches and they had to measure me every day. I would be on the floor and they would pull the strings until it was 19 inches."

"Daniel would wear his clothes home, he was very in character and I was like, 'You have no idea the pain I'm in right now!' But if I did it again I would want it the same way because it made my performance." 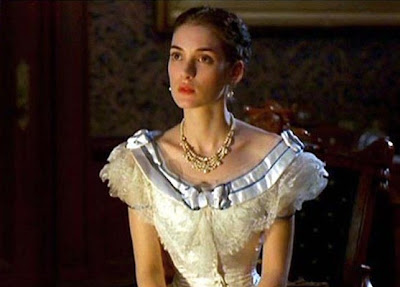 Ah yes, the corset: that curious object of female repression, ruthlessly squeezing a woman's body (no matter what size or shape) into a tiny hard cone, with bosoms thrust upwards and balanced on top like two ripe cantaloupes. In other words, corsets were as much for men as they were for women.

Or was it the other way around? 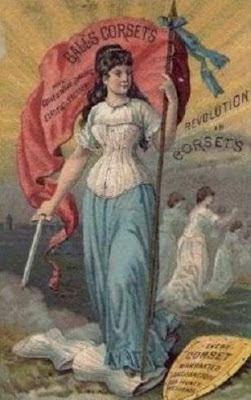 I adore Victorian costumery  - for that is how I see it, "dresses" being an inadequate term for the sumptuous, 50-pound confections that fit women's waists like a second (and imprisoning) skin. Even more than that, I love the ads, often full of whimsy like this almost unbelievable example for Ball's Corsets.

"Revolution in Corsets," it proclaims, depicting a squeezed-in Amazonian figure holding a sword and staff, her foot planted firmly on what is presumably that old-style thing that nobody wears any more. Meanwhile a herd of frightened women stampedes away in the distance. The Ball's Revolutionary Corset has triumped again! 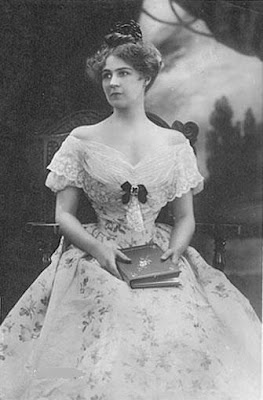 And just look at the results. This is Miss Lettice Fairfax, and aside from the fact that she was named after a garden vegetable, I know nothing about her. Though frills at the shoulder and massive skirts provided an illusion of contrast, corsets took at least 3 inches off the natural waist, converting women's bodies into the perfect clothes-horse for gowns that must have been unbearably cumbersome and stifling to wear.

In fact, I have read that the ideal size for a woman's waist was the same measurement in inches as her neck. 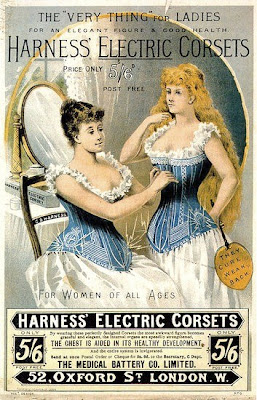 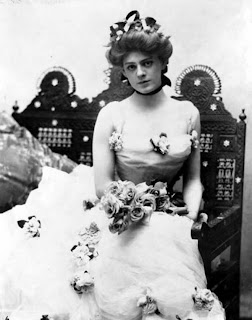 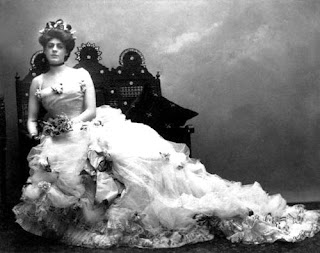 Some of my favorite shots display early celebrities such as a very young and girlish Ethel Barrymore (and these days, the hallowed name of Barrymore is only asociated with Drew, one of the most unattractive young women I've ever seen). In all her photos, her huge dark eyes look sad, her regal costumes displaying her like roast beef on a platter or a hugely oversized wedding bouquet. 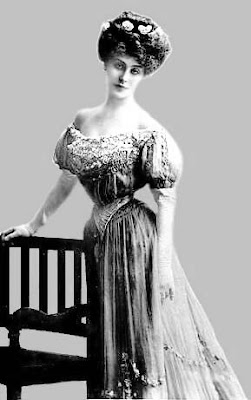 Modern actresses probably dread wearing these things: they make the wasp-waisted gowns grip the torso like a very tight glove and provide a sort of crucial undergirding for the weight and volume of the skirt. But the little torture chambers can be surprisingly addictive. A British actress named Karin Cartlidge, starring in a TV version of The Cherry Orchard, told the London Times, "These bloody corsets do a lot for repression: I nearly fainted in one. I find them quite sexy; actually, it's a funny sort of thing. They hold you in like a cold iron hand round your heart, therefore all your emotions just seethe away underneath it. It's like being in a sort of prison and it's quite exciting, there's something erotic about it." 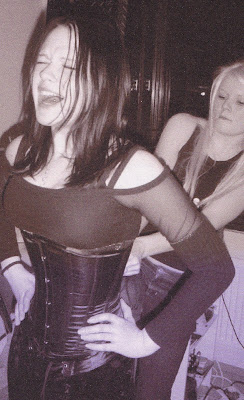 Indeed. I won't get into the sites that celebrate the corset as fetish-wear.  You know how to find them. Unless you're attending a Renaissance fair or working as a barmaid at Heidelberg Days, women don't endure these things any more except as fetish-wear. Most of these sites are extremely creepy. Some particularly slavish devotees "tightlace" day and night, though I don't know why anyone would do that to themselves. 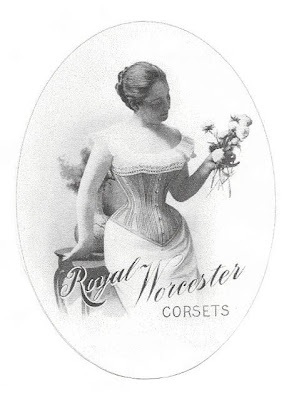 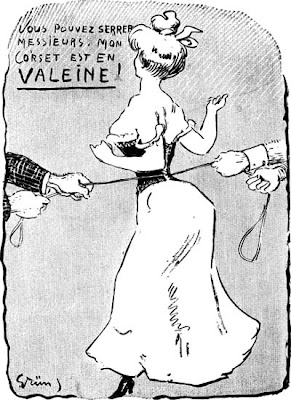 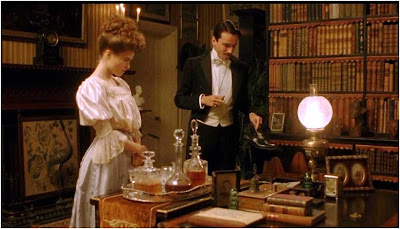 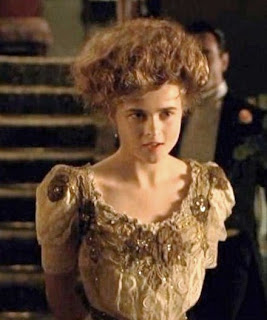 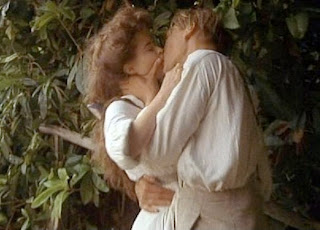 Helena Bonham-Carter is still the ruling queen of the period costume. In A Room with a View, she smolders. With her masses of chestnut hair piled precariously on top of  her head like those water-jugs in the Middle East and her waist reduced to a thread, she swishes around in these dresses as if to the manor born. It must be tiring to pull a wagonload of suffocatingly heavy drapery around with you all day, but somehow she manages it. 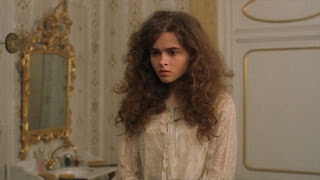 And when she lets her masses of hair down, even in a granny-flanny, she still smolders. 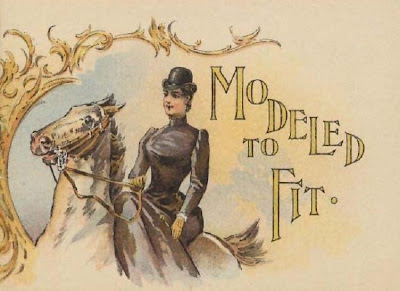 Women had to do everything imprisoned in these things, even ride horses (and sidesaddle! It was somehow considered obscene for women to straddle anything, which makes one wonder about those Victorian families with ten or twelve children.) There were maternity corsets then which must have been agony to wear, and corsets for little girls, just to get them good and used to being squeezed until you couldn't properly breathe. Past the age of ten, normal respiration was left behind with all the other trappings of girlhood. 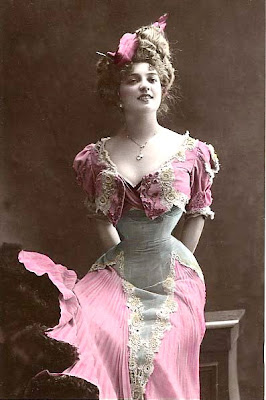 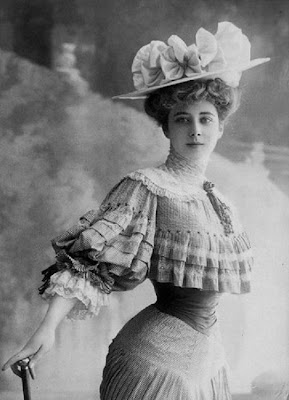 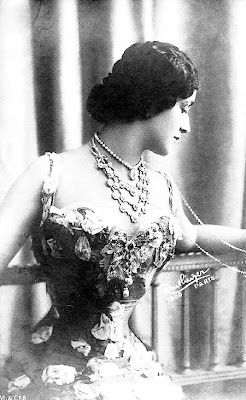 But over and over again, in researching this strange artifact from a very strange time, I found comments from actresses who had endured wearing these things, then had somehow fallen in love with them.

Emma Williams, star of the British series Bleak House, claims, "You get quite strict about your corset - it's like, 'Come on, tighter, tighter.' I had this gorgeous dress for a wedding scene, but it was ridiculously small. I nearly fainted, my corset was so tight. I wore it for eight hours, breathing really slowly so I wouldn't fall over. I'm sure I cracked a rib that day. . .  I had original Victorian corsets, so they were really heavy. I spent half the day crouching down to take the weight off my back. But you do get addicted to them. I might start wearing one round the house, doing the cleaning in rubber gloves and a corset. I'm a classy girl, me." 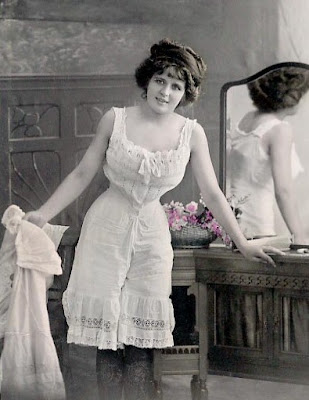 CODA: I just found these two incredible corset ads while looking for something else. They reflect two common features, or perhaps obsessions, of Victorian corset advertising: little scantily-dressed cherubs fluttering around and acting strangely, and "health corsets" that were no doubt meant to counter the anti-tightlacing "dress reform" movement of the late 19th century. Though corsets were probably about as healthy as tanning beds, they were pitched just as effectively. The ads often included doctors' endorsements (shades of Lucky Strike!), as if that settled the whole thing. 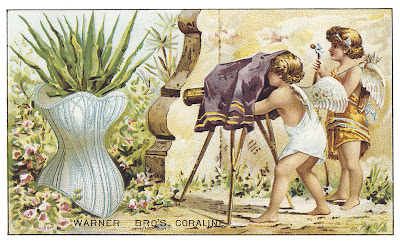 I have no idea what sort of voyeurism is being practised in this ad. I guess the fact that they're photographing the corset, not the woman in it, lets them get away with this overwhelmingly fetish-y shot. (And why is the corset being used as a planter?) This ad is for Warner Bros. Coraline: not, presumably, the movie studio, which didn't exist then - though I think we still see Warners undergarments of a different sort. Bras and things. Next time you think your bra is digging into you and it's torture, think on this and repent. 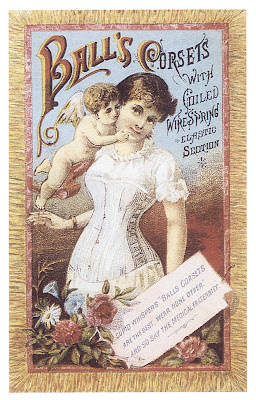 Ball's advertisements are without a doubt the best. This one boasts a "coiled wire spring elastic section", which today sounds like medieval torture but which then promised increased comfort and flexibility (i.e. you could take at least half a full breath). The caption reads, "Cupid whispers 'Ball's corsets are the best, wear none other.' And so say the medical fraternity."

Posted by Margaret Gunning at 9:36 AM