It's pretty incredible to FINALLY see this movie posted when I have been snuffling around for it for something like eight years. (This is, by the way, the second version I found. The first one, taken from a Russian web site, had an annoying buzzing sound in the background all through the movie.) All I could ever find were publicity stills - LOTS of them, more than for any other movie Harold ever did.

I haven't even looked at this yet, as I posted it very late at night. It gave me a surreal feeling. Harold himself didn't like this film, and I think it was made in 1938, his doldrums period when he nevertheless was not quite ready to give up. His "glass character" (his own name for his film alter ego) didn't wear well with time, not because he didn't look good - he looked good for pretty much his whole life -  but because it was a little uncomfortable to see a 40-year-old man acting like he was 25. With one exception, the ferocious kiss in Why Worry?, his alter ego was almost virginal, and a virginal 40-year-old (who in several cases still lives with his parents) is just kinda creepy.

How does it feel to have this lost treasure at my fingertips? I'm not sure yet, because I haven't watched it. And of course it's not like the wild curiosity of a few years ago. But something has changed.  I cannot tell you why, but after pushing the whole subject away from me for over a year, I am "into" Harold again.

I found a stash of copies of my novel yesterday and was a bit relieved - I could only find one, and found it hard to believe that I hadn't kept more than that. I sent out SO many copies to people whom I hoped would be interested, mainly in the film industry, and Kevin Brownlow was the only one who responded, albeit with a very brief enthusiasm which has since died. Rich Correll's initial keen interest (he actually phoned me, gave me contact information and seemed genuinely interested in doing something with it) and subsequent cold and baffling dismissal was nothing short of devastating. I am not sure what happened, but I suspect someone was running interference, and I think I know who it was. When the movie gets made and all my ideas are in it, it's going to be pretty heartbreaking. But I digress.

I have no idea why more photos, posters, lobby cards, and other forms of publicity exist for Professor Beware than for (even) Safety Last or The Freshman, when it disappeared from view for so many decades. But here it is. Sampling through it, so far I notice Harold's shrill, strident voice yelling and screaming a lot, and maybe this is one reason it didn't go over well. I have no idea why he didn't just use his regular, jovial Midwestern voice with its delightful tinges of Nebraska. Comics often have a persona with an obnoxious voice - Jerry Lewis comes to mind - but this one is pretty hard to take. 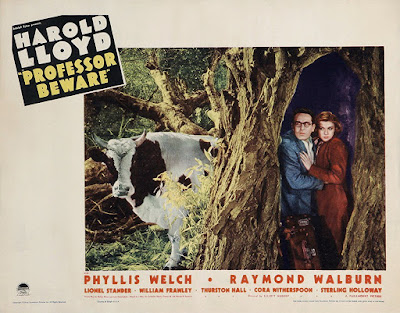 If you're interested in this movie, please watch it right away! It could easily be taken down for copyright reasons. It was shown on AMC just once, some time in the '90s, and there's a rumor it was on YouTube very briefly in 2015, but I don't know about that. I think I would have noticed it. But the powers that be at YouTube will likely re-inter this gem just to make sure we are deprived of all the best things on the internet. 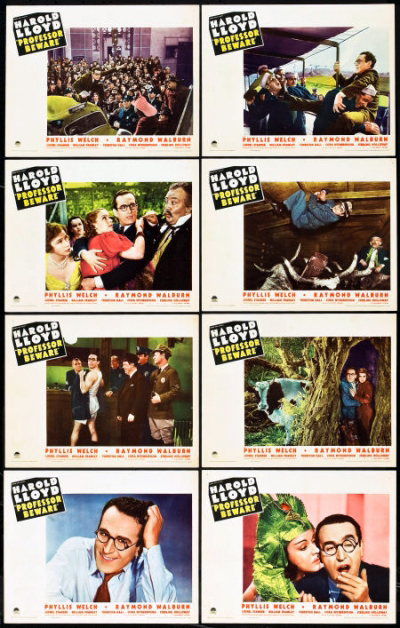 BTW, aren't these gorgeous? I'm afraid I don't own them. It's just an internet image. But in this case, as with so many things, the buildup was much better than the actual event.

Posted by Margaret Gunning at 5:17 PM No comments:

Freakin' SPIDERS on my blog - !

Posted by Margaret Gunning at 4:59 PM No comments: