The world's first automobile (and Ford had nothing to do with it!) 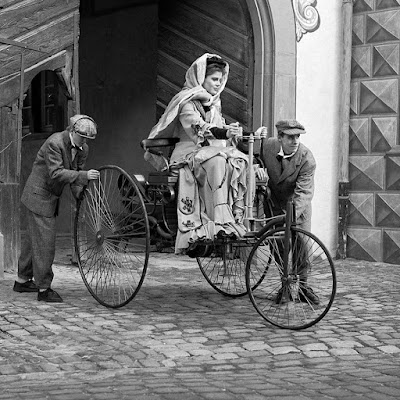 The Benz Patent-Motorwagen ("patent motorcar"), built in 1885, is widely regarded as the world's first production automobile, that is, a vehicle designed to be propelled by an internal combustion engine. The original cost of the vehicle in 1885 was 600 imperial German marks, approximately 150 US dollars (equivalent to $4,183 in 2018). The vehicle was awarded the German patent number 37435, for which Karl Benz applied on 29 January 1886. Following official procedures, the date of the application became the patent date for the invention once the patent was granted, which occurred in November of that year.

Benz's wife, Bertha, financed the development process. According to modern law, she would have therefore received the patent rights, but married women were not allowed to apply for patents at the time.

Benz unveiled his invention to the public on 3 July 1886, on the Ringstrasse in Mannheim.

And here it is in action! "Action" may be too strong a word here, but at least it moves. My enthusiasm for vintage automobiles is relatively new, but this one goes about as far back as you can without putting a horse in front of it. As they must have, sometimes, when it sputtered to a halt or ran out of the thimblefull of gas it must have taken. Sputter, sputter, sputter! As they used to say, "chitty chitty bang-bang". Only this sounds more like a sewing machine.

I was delighted to see how many videos there are on YouTube of this glorious clinker of a machine. And they work! It's almost like an electronic wheelchair, or one of those velocipede bicycles with the huge spoked wheels. I have mixed feelings about the internal combustion engine, of course, but my feelings are too complex to get into that now. 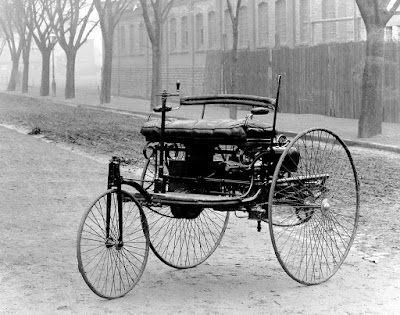 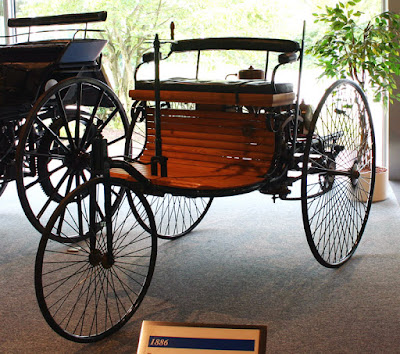 A gorgeous colour shot of the Benz, likely a reconstruction.

Posted by Margaret Gunning at 5:26 PM