A peanut butter sandwich made with jam

This adorable gif of the adorable Emmy, as in emmymadeinjapan,was going to be a short YouTube video until I flew into a panic. Usually I know when I'm going to violate copyright, and stay well away from it. Now I'm not so sure. I think a gif is OK (isn't it? Especially on a blog no one reads.)

The whole reason for this paranoia is the "strike" against my account I got from "violating community standards of decency" with my Eadweard Muybridge animation, the same animation that appeared on several other videos which were allowed to stand. The video consisted of seven or eight frames of nude women, mostly shown from the back, with one woman playfully dumping a bucket of water over the other's head. I was warned that this was considered filthy pornography, and if I got two more strikes against my account, I was "out". I mean, now and forever. 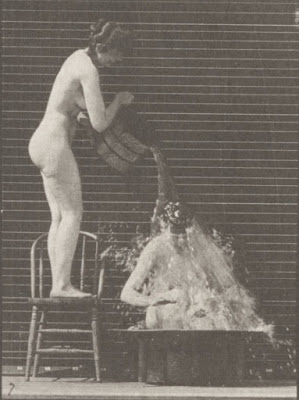 So now I'm freaked out.

Never mind the jaw-dropping and even horrifying stuff I see on YouTube now, including a recent one about a woman who "FUCKS A DOG!" (and this news screamed at us by some millennial loser). Horrible, horrible stuff, because it's ugly. It's cheap and doesn't accomplish anything. I'd rather watch a person shit. I don't look for others of this genre and don't want to find them, but I am sure there are  some that are a thousand times more explicit than my two little frollicking Muybridge girls.

So at least we get this gif, this very cute snippet of Emmy looking at her peanut  butter sandwich seven times. I'm not sure why seven, but it's adorable. Most of her stuff is quite watchable and relaxing. I like her respect for other cultures, other eras, and other ways. She featured a series on prison recipes, real ones I mean, from  a cookbook written by a former inmate. The treatment was not mocking in any way ("Boy, all those guys in the slammer, they must get horny as hell" - I can just see it), or satirical or even funny, but respectfully fascinated at how people make do with limited resources. That's how Emmy approaches things. No spit-takes, no mugging (though she does put on funny accents once in a while and does a split-second "bit" at the very end), no screaming into the camera with her face half an inch away from the lens.

In other words, no cheap tricks.

I hope this is the new YouTube, but I fear not. She's considered old school now. YouTube has been hijacked by the gamers, loud millennial slackers with the IQ of a gnat. Almost all of them are young males who experienced failure to launch, and sit home alone in their Mom's basement all day, perpetually playing  video games and "fapping" to pictures of their latest female android superhero.

Posted by Margaret Gunning at 5:13 PM No comments: