Racism or erase-ism? The dilemma of Sunflower 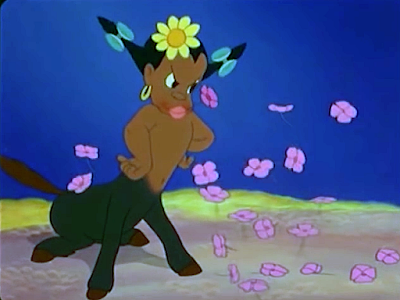 It's been said about certain particularly pompous types of music (Wagner comes to mind) that "maybe it's better than it sounds." This statement puts me in mind of Disney's Fantasia.

Maybe it's worse than it seems. 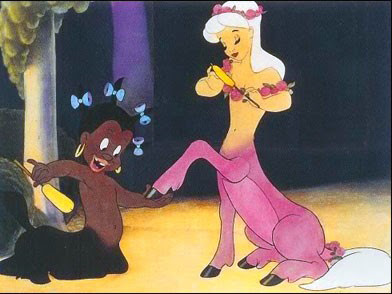 Disney was a farm boy at heart, and Fantasia was a country bumpkin's idea of high culture, a massive and lumbering delivery device for "good" music. Meaning, classical music, which you really should be exposing your children to, for their own good. Disney's choices were conservative:  Beethoven's Pastoral Symphony, Tchaikovsky's Nutcracker Suite, the Sorceror's Apprentice, Dance of the Hours, all things that leant themselves to the typical sentimental, florid Disney animation. And to throw in something really daring, Disney included a bit of Stravinsky to accompany T-rexes and stegosauri duking it out in a steamy primordial jungle. 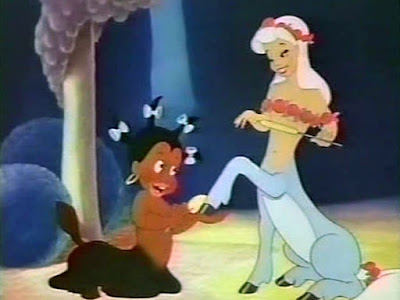 But that's not what we're talking about here.

We're talking about someone else.

There was a lot more to Fantasia than Mickey stemming the flood in The Sorcerer's Apprentice (the best-animated piece in the whole thing), dancing mushrooms, and alligators chasing after ostriches. There was this person. This - little horse, rather, and her name was Sunflower, featured briefly in the Pastoral Symphony's slow movement. 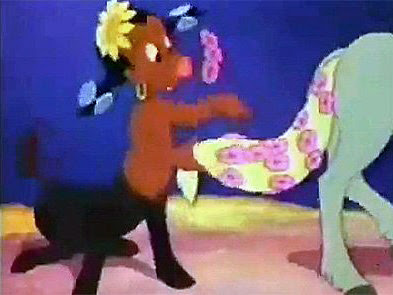 We see a group  of pastel-colored horsettes, or should I say centaurettes, primping to meet their beefy centaur boyfriends. But they're not doing all the primping by themselves. To help them braid their manes and blow-dry their tails, they have. . . Sunflower.
. 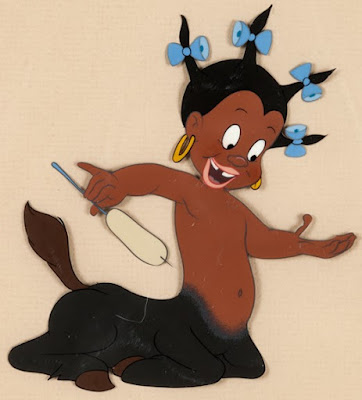 But, cute as she is, she's now a problem. Sunflower is clearly a servant, a little black girl trotting around obediently after all the glam horsettes. She's much smaller than the others, wears large gold hoop earrings, has stereotypical African features, and has her hair tied up in rags. In short, she's what people thought of in those days when you thought of a servant. Is she smaller because she's younger, a different kind of centaur, or what? It may have been a familiar visual device to convey relative status. This helped the audience orientate themselves, made it easier on them due to recognition of something they knew in the "real world".

She's something of a shock today, like seeing the godawful Steppin' Fetchit characters of the 1930s. By some Disney magic she was cut out of all prints of Fantasia when it was reissued for home video in the 1960s. Just - dropped, without an explanation, without a trace. This took some fancy dancing on the part of the animators, who had to try to keep the animation moving in synch with the music while the shears were applied. They used awkward closeups that left her out of the frame. The epitome of being marginalized! In one case, a red carpet eerily unrolled all by itself, because Sunflower was no longer there to unroll it.

Removing Sunflower was considered to be a "solution". She had been solved -or dissolved - by being erased, un-drawn, un-created. Undone.

It was as if she had never existed at all. It seems, to me, a curious solution to a racist portrait, but that's what they did. Thus, they never had to take any responsibility for what they had already done. This was Papa Disney, after all, and he was clearly above all that.

If they hadn't erased Sunflower, there would no doubt have been an outcry. I understand the outcry, yes. But it confuses me. The whole thing does. If she had been a real live human being, it would have been more complicated - but maybe not by much. It was as if Sunflower were the shit-disturber, the joker in an otherwise conservative deck. So the trap door had to open. There was no other way.

Max Fleischer found another way, or at least his studio did, when it came time to release a DVD set of the complete Popeye cartoons (which I, of course, have). At the beginning of each DVD is a disclaimer stating that some of the cartoons feature characters and images which might be considered racist and offensive, but that these reflect the attitudes and prejudices of their time. And to censor or remove these images would be to pretend those attitudes never existed at all.

But soft! What's this? A little later on in the Pastoral Symphony, we have the fat drunk guy on the donkey, Dionysus or whoever-the-hell-he-is. He's a silly character, rolling around, and meant to be. But who's that on either side of him? Look fast, because they are there for exactly ten seconds.

These are black servants, half-zebra instead of half-horse. They are quite glamorous, much taller than Dionysus - in fact, they tower over him - and their job is to fan him and keep his wine glass topped up. No matter how different they look from Sunflower, they are still servants, and they are black.

And they've been allowed to stay.

I've always found that weird. Is it the fact they're more adult, more exotic, taller, and less the little plantation girl than Sunflower? Are zebras more acceptable (half-white, after all) than horses or ponies? Is it the fact they're waiting on a man, instead of a bunch of pony-girls? I can't quite understand the thinking here. Or was it just too hard to animate them out or turn them into camels or something?

What's even stranger though is that Sunflower has a sunflower in her hair in some shots, and not in others - and this is in the same scene! It comes and goes, comes and goes at the whim of the animators. Did they know she was going to be cut out? No, she was there when the movie opened to great fanfare in 1940. (It was a flop. The public found such forced musical edification pompous and boring.) Nobody noticed it, I'd imagine, or thought much of the fact that there was a cute little Negro girl waiting on the ladies. It wouldn't have raised an eyebrow. It doesn't now, either, because it can't!  Sunflower has left the building.

Only this time, she's gone for good.