What the FXXX is the "Organ of Cecilia"? 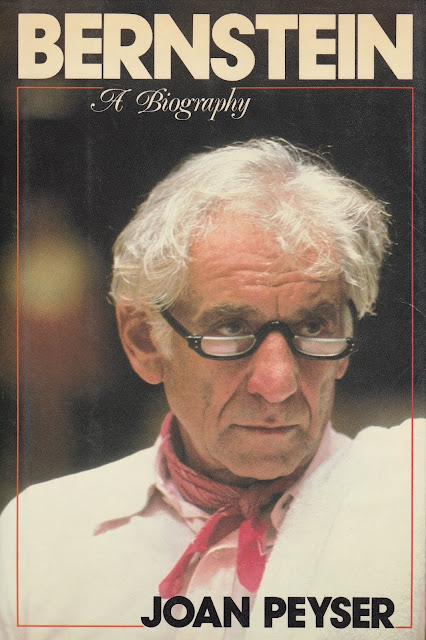 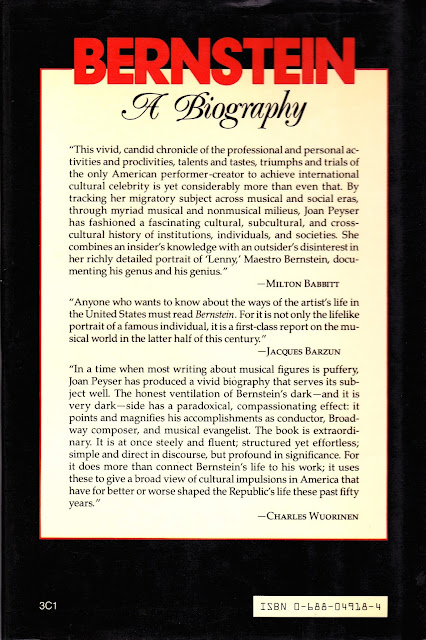 This is just another one of those strange things. A while ago I wrote about buying an old hard-cover copy of Colleen McCullough's novel The Thorn Birds from Amazon, and discovering that between its browned pages were sprays of flowers which had been pressed and dried, their colors still faintly apparent even after God-knows-how-many years. It made me wonder who cut these slips from their garden, and where (Australia?), and what possessed them to place them in a volume, a beloved novel I assume, and leave them there, forgotten. For that matter, why was the book sold? Had the owner passed on, faded away along with the mysterious flowers? My questions just multiplied.

But then I dug out this book - and I swear to you, I do not remember when I bought it, where I bought it, and it's just possible I got it from Amazon, meaning it was used when I got it. Maybe. But it seems to me I've had it longer than that. It's a rather dull tome which I thought I'd read again to help me get to sleep at night. Written by the controversial journalist Joan Peyser, it was considered a stick of dynamite in the music world because Peyser dared to state that Bernstein was gay. There erupted a firestorm of  vehement denials, shock, horror, dread, etc., while no one even stopped to think how homophobic that particular reaction made them appear. Oh, no! they seemed to be saying. We just don't want HIM to be gay. 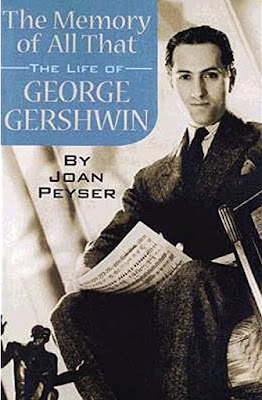 And speaking of. Peyser also wrote  a controversial book about George Gershwin, suggesting he was at very least bisexual and certainly in no hurry to marry any woman he knew. The book was thundered at and railed at and denounced, as was Peyser, who now seemed to be a scarlet woman of musical biography. She'd have her comeuppance decades later, when a dry, scholarly tome which claimed to be The Ultimate Gershwin Biography actually quoted her book, somehow rendering her academically acceptable. (Peyser was also the first writer to posit the veracity of Alan Gershwin's claim that he was George Gershwin's illegitimate son.) 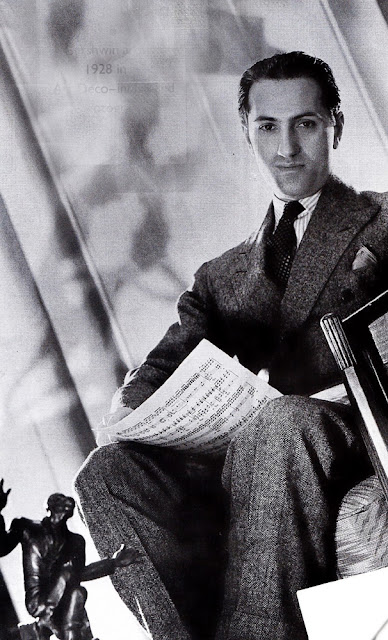 But that's not what this is all about. Neither is this clean copy of the gorgeous cover photo Peyser used, in which Gershwin's elegant narcissism is on full display. The slightly sneering "fuck-me" mouth is particularly disarming, not to mention provocative.

NO! It's about THIS.

THIS, which tumbled out of the Bernstein book as I began to flip through it in preparation for reading it (trying to find, in vain, the sexy or salacious parts).

THIS, of which I have no knowledge, no idea of its provenance. WHAT THE HELL IS IT DOING HERE? Who cut this out of the New York Times on Sunday, November 10, 1985 and taped it to a piece of green plastic with multiple pieces of Scotch tape? And why? I had no access to the New York Times then. I don't know why, if someone DID clip this out, they chose one of Lenny's more pretentious little acrostics or whatever they're called. (Like a monkey, he had a mind for puzzles.) Like the gay Copland, the gay Bernstein (who later came out as flamboyantly as one might expect) might be trying to establish his place in the pantheon of greatness by sucking up to the boss. Could that explain the enigmatic reference to "Organ of Cecilia"?

I keep finding things I don't understand! They keep falling out of books, found objects. I wondered just fleetingly if it was something my dead sister did, though why she would do something so strange, I don't know. Certainly if I had done it and given it to her, she would have called me completely insane. But she is dead now, so I don't need to worry.

But it would be nice to now what the hell this is and where it comes from. Who knows what will tumble from the next old book I open? Undiscovered Gershwin scores? Condoms? Pressed and dessicated after-dinner mints? 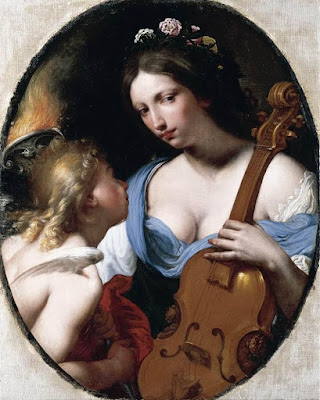 ADDENDA. St. Cecilia, virgin, martyr, and patron saint of music, which is why she is holding a weird sort of violin or cello. This kind of explains it, but for a virgin saint, she sure shows a lot of cleavage.

Posted by Margaret Gunning at 12:00 PM No comments: