Just when I think I've seen the all-time worst movie ever made (Plan 9? Glen or Glenda?), something like this comes along. 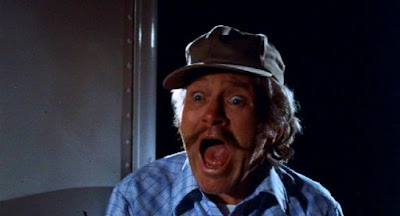 It's one of those super-low-budget creature-feature things made in the early '70s. It has a noble cast, from Janet Leigh (yes, THAT Janet Leigh) to Stuart Whitman to Rory Calhoun, not to mention DeForest Kelley, the legendary Bones on Star Trek. This makes you wonder if the rent was overdue or what.

For the evil menace in this movie isn't giant locusts or rogue apes or killer ants or Godzilla. Not even Gila monsters filmed to look big, or anything like that.

Bunnies which supposedly have been made real big and bloodthirsty by some sort of experiment. One escapes (ONE?), and within a couple of days, the whole area is swarmed by "thousands" of giant rabbits (though we see only a dozen or so at a time, hopping along in slow motion). 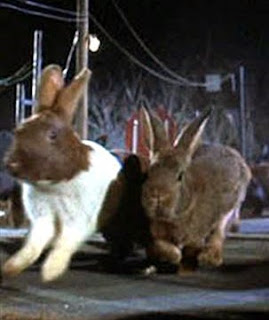 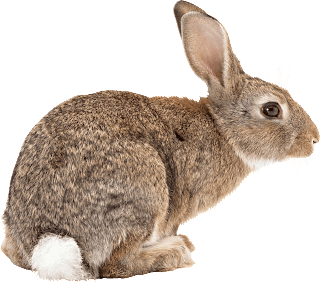 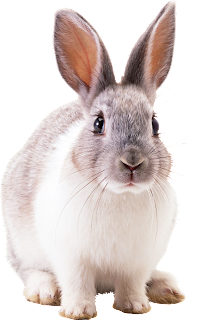 The only problem is, they're so darn cute we can't believe they'd be a menace to anyone, let alone snap off someone's arms and legs like they're made out of china. 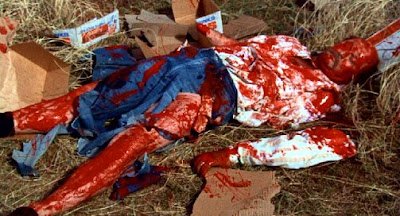 This isn't one of those tongue-in-cheek horror-movie-parody things like Attack of the Killer Tomatoes. It's in dead earnest. This movie is trying very, very hard to be a scary movie. The rabbits, filmed against dinky little sets to make them look big, are depicted as bloodthirsty marauders as they hippity-hop along the bunny trail, leaving humans sprawled in a wash of maroon house paint. This just drags on for an hour and a half, but it's unintentionally hilarious. I watched it one night and my husband came downstairs and said, "WHAT are you watching?" He hadn't heard me guffaw like that in some time. 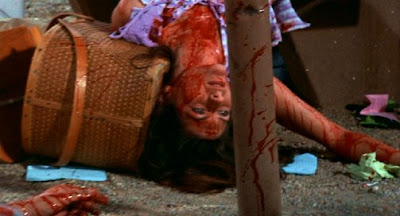 This one is listed under "comedy" on YouTube, though I assure you it's made with the utmost seriousness. The filmmakers ask us to accept the fact that when the rabbits wouldn't cooperate, actors in bad rabbit suits and even hand puppets acted as viable stand-ins. What ISN'T so funny is what happens to all those fluffy-tailed, hippity-hoppity, twitchy-nosed, lop-eared Peter Rabbits: they're all electrocuted and end up lying in a heap of smoking ruin. 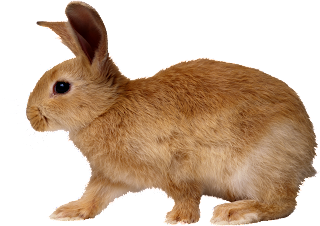 I hope nobody took their kids to see this. It's the one horror movie where you hope the "monster" will win.

And here's what the critics said. . .

The mind marvels at the bravery of the person who walked
into the producer's office to pitch this idea.

Well worth watching for those enamored by bad films that are
unintentionally funny.

Impossible not to admire the total withholding of irony in
Claxton's approach to this kamikaze project.

One of the worst films ever made.

The only thing more lifeless than the corpses in Night of
the Lepus is the movie itself.

It is this technical laziness as much as the stupid story
or the dumb direction that leaves the film in limbo and
places it in neither one camp nor the other - neither with
Attack of the 50-Foot Woman nor with Flopsy, Mopsy and
Cottontail.

A failure on every level.

Posted by Margaret Gunning at 1:08 AM No comments:

Posted by Margaret Gunning at 12:53 AM No comments: