This near-perfect advertising gem from the mid-'60s stars a shockingly young and fresh-faced Ali Macgraw, who would soon rocket to fame in Love Story only to plummet into total oblivion. Being married to Steve McQueen will do that to you.

But before all that, there was this delectable ad for the Polaroid Swinger: "it's more than a camera, it's almost alive/It's only 19 dollars and 95!" A yet-to-be-famous utility singer named Barry Manilow sang the irresistibly catchy jingle. And such a product! It was new, it was affordable, it was"right now". Instead of a red light going on when you were ready to shoot, the camera flashed a large black-and-white YES. In fact, it used only black and white film, which didn't seem to matter to the young and hip.

I remember Polaroid cameras, the very early ones where you "zipped it off" (ripped off a plastic cover after allowing the thing to "stew" for so many minutes). I remember my Dad taking pictures of me on my horse, and him getting this - stuff - on his hands, this caustic goo from the margins of the picture, chemicals for developing it or something. After the picture dried - and it had to dry, just like those old-fashioned photos you developed in a tray, then hung up with clothespins - you had to stick on an adhesive-backed piece of cardboard to keep it from curling. But once that backing was on there, you'd never get it off.

I still have some photos - OK, a lot of them - with thick plastic backings on them, tiny things about 2 by 3 inches. For a few years, this was all we took. They had the instant payoff factor, but unfortunately over the years they have become almost indecipherable. I scanned a few of them and blew them up, but the results were mixed. Some of the best shots of my kids growing up were taken with this low-tech method, meaning that most of them were lost.

But that aside, this is one of the most perfect ads I've ever seen, second only to that first Maxwell House work of genius with the bongo-drum percolator ("tastes as good as it smells"). The Swinger embodies the '60s, beach life, freedom from responsibility, being young and attractive and with your whole life ahead of you. You could smoke then, and stay out late, and eat and drink whatever you wanted to, and still look great with no effort. Ali Macgraw had that earth angel innocence, the no-makeup face, the wash 'n wear hair.

I made a ton of gifs last night from this, my all-time-second-favorite ad, but they somehow turned out to be unsatisfying. It's hard to extract a few seconds out of such a seamlessly tight work of art. The shots cascade and tumble into each other, creating a dizzy sense of freedom. And - click - click - every move, every pose, every activity is captured on film, in crisp black and white that develops right before your eyes.

So what was I going to focus on? Hair. Ali's hair, which is used in a particular way in this one-minute saga of '60s youth. It's very very fast, so you have to watch for it. Her hair whips around, tosses, flings, and is casually pushed back. I did gifs of Ali's hair, plus a few of her walking in delightfully washed-out light, so that she becomes virtually animated.

Since I can't leave anything alone these days, I mucked around with the speed/direction/order of the frames and made them do things. I don't know if this improved them or not. I had mixed feelings about it, but thought, damn, I made all these things. Might as well put them up, as is. Wash 'n wear.

This one goes out to the dreamers (a Scientology moment)

NOTE. Posting this video in no way endorses or promotes or says "hey, hey, hey" to the vile practice of Scientology. I just want to show you these guys' new strategy. They've replaced those cheesy rallies and Veg-e-Matic-style announcer with THIS - steamy, dreamy images that don't really mean anything. Nicely shot, however, which is really why I posted it.


Walter Freeman, who championed lobotomy in the US, toured with his “lobotomobile” demonstrating the procedure 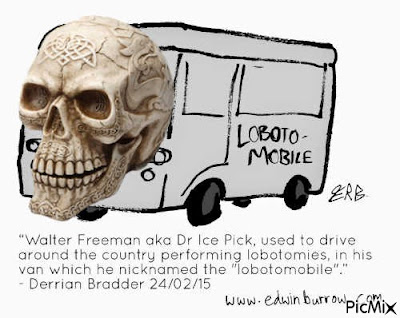 Throughout his life, Walter Freeman was obsessed with finding a cure for mental illness and he thought he found it when he became the first to introduce and popularize the prefrontal lobotomy in the United States.

He perfected the procedure by using ice picks hammered into each frontal lobe through the back of each eye socket and performed nearly 3500 lobotomies in his career.

Walter Freeman was born on November 14th, 1895, in Philadelphia, Pennsylvania, United States. His father was a very successful otolaryngologist and his maternal grandfather was William Williams Keen, a prominent surgeon in the Civil War. Psychosurgery is cutting into the brain to form new patterns and rid a patient of delusions, obsessions, nervous tensions, etc.

In his early years, Walter wasn’t interested in medicine but after he received a bachelor’s degree in 1916 from Yale University he studied neurology at the University of Pennsylvania and earned a medical degree in 1920.

In 1935 Freeman learned of a frontal lobe ablation technique when Carlyle Jacobsen tried frontal and prefrontal lobotomies on chimps and came to a conclusion that the chimps became less aggressive and more manageable. 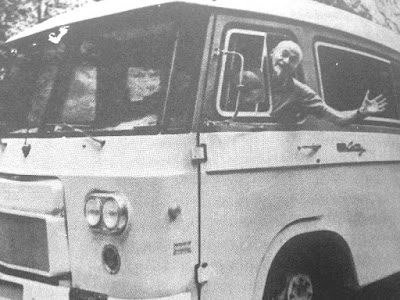 The same year Antonio Egas Moniz, a Portuguese neurosurgeon devised a leucotome, an instrument for dividing the white matter in the brain, and performed the first procedure known as prefrontal leukotomy.

In 1936 Freeman modified Moniz’s technique and together with his colleague James Watts he performed the first lobotomy operation in the United States on a 63-year-old Kansas housewife suffering from anxiety, insomnia, and depression. He was convinced that the operation was successful and was satisfied with the results so he started to propagandize the procedure heavily recommending it for any type of disorders, from psychosis, depression or neurosis to criminality. 
Trying to find a more efficient way to perform the procedure he developed the “ice-pick lobotomy”- an operation that didn’t require drilling holes in the skull. Instead, he inserted an ice-pick-like instrument above each eye of the patient by tapping it with a hammer. Many of his colleagues criticized his method but Freeman was convinced that it was a success and recommended the procedure. Between 1939 and 1951, almost 20,000 lobotomies were performed in the United States and as Freeman claimed, the operation reduced the governmental costs from $35,000 per year for keeping a patient in an asylum to $250 for lobotomizing him. 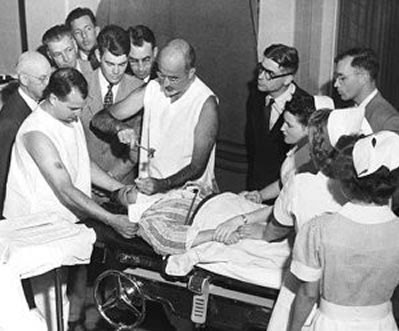 He popularized the procedure and started traveling around the country in a van he called “the lobotomobile”, performing dozens of ice-pick lobotomies each day. He was able to do a lobotomy in 12 minutes and it is said that he once performed 25 lobotomies in one day. Known as a showman he often used carpenter’s hammers and also liked to insert picks in both eyes simultaneously. 
However, lobotomy’s popularity faded and Freeman performed his last lobotomy in 1967 when his patient Helen Mortensen, died on the operating table. After this incident, he was banned from operating.

Read another story from us: Egas Moniz invented the full frontal lobotomy and won the Nobel Prize in Medicine for it. He was also shot by one of his patients.

In the last 20 years of his life, he continued to tour the country in his “lobotomobile” visiting former patients and documenting their histories. He died on May 31st, 1972. 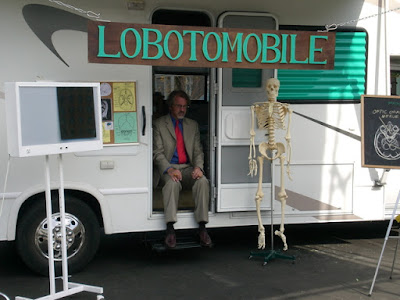 BLOGSERVATIONS. I don't know what to say about this, but saying something seems to be called for. In another era, I know I would have had my brain ice-picked into submission, no doubt to save those pesky bills from the sanitorium. Humanity has always been terrified of mental illness, and unfortunately remains terrified. There are those (radicals!) who say we've replaced straightjackets with chemical restraints. That instead of warehousing the mentally ill, we dump them out onto the street. And that would be true.

Rosemary Kennedy, sister of JFK, was lobotomized, not because she was violent or unteachable, but because she liked men a little too much. She was unruly and didn't fit the social mold. LOP, went her brain.

Maybe it would be better to have your brain lopped. What would it be like to walk around inside a lobotomized mind? Would it be as full of holes as Swiss cheese? The brain is nothing but a computer made of meat, and meat can be carved up, sliced, even eaten.

I was going to call this post Borehole, but I assumed no one would be particularly drawn to read it. In any case, borehole was soon to be replaced with eye socket and ice pick. Though Freeman streamlined the lobotomy and made it readily available to the masses, he didn't win the Nobel Prize for it. That went to that Moniz character, ivory tower type, didn't even DO them like Freeman, just theorized. But theorized countless people to a living death. For that, they give the Nobel Prize.