Posted by Margaret Gunning at 2:53 PM No comments:

I finally found a way to copy and embed these two animated Facebook covers! I took a shot at making one of these for my own page, but it was too complex. Like a lot of "new" FB features, it may eventually become easier, but then people will post a lot of VERY obnoxious ones (with sound that you won't be able to get away from).

After months of putting up with it with no choice, FB has just now given me the "option" of seeing my notifications while I'm doing something else. For months they have been popping up in the corner no matter what I am trying to do, and my attempts to get rid of them resulted in disabling my precious Adblocker, so that my son had to re-activate it. So now they ASK me if I want it?? The only way I could get away from it was to say, "Ask me later", which is hardly a "no", is it?

Like a lot of FB videos, this isn't formatted for my blog (I'm still looking for a way to do that), but even with part of it cut off, it's pretty cool to watch. Does it represent The Future?


Posted by Margaret Gunning at 2:52 PM No comments:

Scientology: the wrong way to cry

Note to shameful-secret-watchers-of-A&E: I am just as hooked on "that Scientology show" as you are - maybe even more so, because I have a thing about cults. And I have a thing about cults because I have experienced devastating religious abuse, and dealt with it by walking away from it. I have yet to come to the point where I can write about it in any detail, but in two instances, trusted spiritual leaders were ejected or went to jail for breaking every moral and ethical law that exists, up to and including sexual assault. The fact that the religious trauma of my childhood somehow, unbelievably, happened again in adulthood still makes my head spin.

This means that shows like this can "trigger" me. And they do. Boy do they. Why do I keep coming back for more?

But I have to admit, the above video by a former Scientologist (I used only a snippet, and purposely didn't put a name on it) got to me. He literally stuck his face right into the camera and wailed. This is the opposite of what I see on "that Scientology show", where people seem to have an awfully hard time dealing with tears.

It's understandable that everyone cries on this show. If it were me, I would have committed suicide a long time ago, so to a person I think they are heroic, and have the right to display any and all emotions that are left over from this bizarre quasi-military UFO cult.

But to a person, including (and especially) Leah Remini, they cry in a funny way.

I don't think I have ever seen anyone allow a tear to trickle down their face on this show. It's always very carefully dabbed away with a tissue before it escapes the bottom eyelid.

I've seen people cry like this before, and it makes me wonder if they have trouble with emotion, or are even afraid of it, afraid of letting it overflow.

Is this the Scientology way? Or are these people so emotionally brutalized that they are afraid to let that particular emotional rain fall?

In the case of Leah, the careful dabs are like a science experiment with blotting paper. I wondered at first if she were trying to preserve her perfect makeup. She IS pretty free with the lip collagen, after all (her lips are a different size and shape every week, which is a distraction), and maybe doesn't want puffy eyes to match.

But then I saw others doing it, and it was even more mysterious. In this one, the lady even seems to be offering up her single tear as a kind of sacrifice.

Dab, dab, dab. No nose-blowing either, no rivers of snot such as you'd get with a real flood of tears.

In case you think I'm being flip - all right, I am, but as compelling as it is, this is a reality TV show, which (as with all of them) you have to take with a tiny grain of salt. I have no doubt these people suffered horrendous trauma and will spend a lifetime trying to get past it. But I also get the feeling their ordeal is being packaged by the producers in a way which will appeal to the largest possible segment of the public. And this isn't fair to them any more than it's fair to the rest of us.

Scientologists are lunatics, in my book, and their ugly paramilitary organization is an offshoot of Nazi Germany more than anyone yet realizes. Some day, the connections will be found, whether from Hubbard or that insane little pipsqueak who comes up to Tom Cruise's belly button (and never mind the ramifications of THAT). Scientology rallies have a Nuremberg flavor to them, the wide, dizzying camera angles reminiscent of Riefenstahl's Triumph of the Will. The histrionic announcer on those pep-rally-style videos is so ludicrous that it's almost funny, sort of a cross between Adolf Hitler and a spokesman for Ron Popeil. 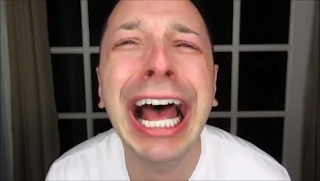 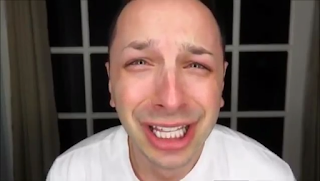 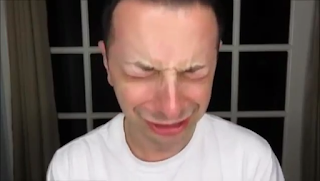 Right. So we've established that this is an evil regime, and brutal for people to exit without consequences. But what about the guy in the first video? I confess I didn't watch the whole thing, because I couldn't, but I know that it's about Scientology and his attempt to escape it. He has a whole series of them, written from the perspective of a persecuted gay man who was lured in by the promise of acting gigs. I've never seen anyone cry "at" a camera before, to the point of nearly jamming it down his throat, and it kind of turned me off. I also noticed there were no tears - I mean, none at all, not even the blotting paper kind, though he wiped away "something" at the end. But he did not have the red or inflamed or even the watery eyes of weeping. HE WASN'T CRYING, folks, which means that he was pretending to cry, trying to make us think he was. And he wasn't. 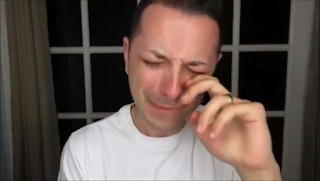 This video produced a flood of sympathetic comments, the usual Greek chorus of deliberately elicited/stage-managed support. I don't know what's going on here, but my solar plexus gong is ringing, and I feel as if I'm being played. It's powerful stuff, which means it should NOT be played with, at all. Ever.  People have been jerked around enough, haven't they? But here it is, and I know there is a lot more. It just seems offensive to me, like a plea for my sympathy. I also see all sorts of tweets and loyal fan comments and even a "documentary" this guy made, but I have to say to you at this point, I really doubt if this guy was ever a Scientologist. My spidey sense/fake-o-meter is telling me he wasn't.

Scientology is a way for this guy to get the kind of attention he thinks he needs, and it's working. Behind it is that peculiar stew or fever that means he is working his way relentlessly towards a reality series of his own.

For after all - isn't that the ultimate goal of every one of us?

Post-blogservations. I noticed today - not that I notice these things - that the above YouTuber announced the reason he went so over the top the other night. He says his grandma died. He never said anything about this last night when he was swallowing the camera lens. At least he could have made it his dog! His Nana must be really pissed, because now he can't write about her any more.

Posted by Margaret Gunning at 2:10 PM No comments: