Just stumbled on this when looking for something else - specifically, the animated Facebook cover for Meowingtons (which I MIGHT be able to post a link to). This just started playing on Facebook, as videos are wont to do, and I was snipped. I mean, snapped - I mean, soaked into it, because it is so very real. It humbles me to think that a real cartoonist (someone named Steve Cutts) animated this, when I aspire to make jerky little figures move with a rinkydink gif program. It's based on the animation style of my beloved TerryToons from the early '30s, with a macabre side of Max Fleischer expressionism, but its message is as "right now" as it gets. It expresses everything I feel about Phone Culture, which I still refuse to join (though I do have one, and you'll never guess what I do with it!. . . That's right.)

Watch this more than once. More than twice. I'm going to watch it again later. And again.

Posted by Margaret Gunning at 12:34 PM No comments:

Email ThisBlogThis!Share to TwitterShare to FacebookShare to Pinterest
Labels: animation, animators, Are You Lost in the World Like Me, cultural decay, decadence, narcissism, phone culture, Steve Cutts, technological wasteland, technology 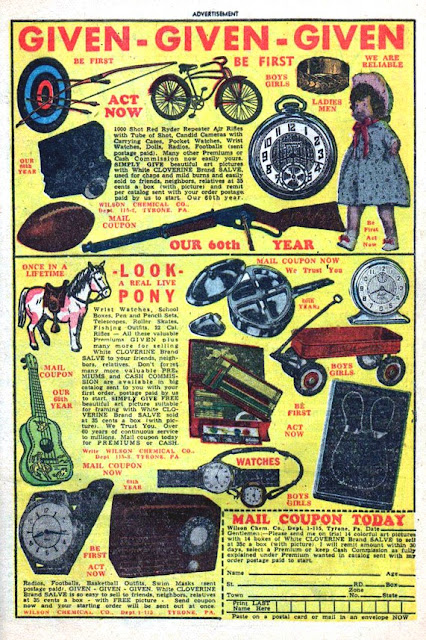 This is one of those sinister comic book ads from the 1950s that promised naive, trusting children all sorts of extravagant "free gifts". They claimed to be just GIVING away dolls, wristwatches, jewelry, guitars, strange dark rectangular things (?), and - most seductively - "a real live PONY". (Note that they don't say "we're giving away a pony" - no, we're just supposed to look at it.) 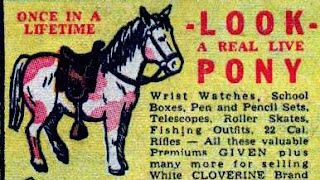 Coyly displayed below the splendid image of a "free" rifle is the announcement "OUR 60th YEAR" - our? Who or what is this "our"? Look closely - no, don't, because you can't, the type is too small. But back then, when we all had better eyesight, we would eventually realize that to attain any of these "free" ponies and radios and cameras and other things, we had to do something.

To sell something door-to-door. Cloverine Salve, to be exact. As a kid, I had no idea what salve was, and even now I wonder what could have been in it. Goose grease, perhaps?  I guess it was something like Vick's Vap-o-rub, stuff that you smeared on yourself or others. At any rate, you had to sell a tremendous amount of this stuff to earn any of these premiums, and I really doubt if anyone ever had a live horse slipped through their mail slot. 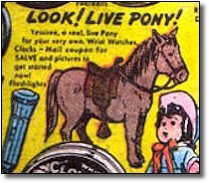 Just the tone of this ad and its feverish captions (GIVEN - GIVEN - GIVEN, ACT NOW, ONCE IN A LIFETIME, BE FIRST, WE ARE RELIABLE, and, strangest of all, WE TRUST YOU) - all these exhortations have an evangelical quality to them, a sort of religious fervor which reminds me of Elmer Gantry at the pulpit. This is old-timey salesmanship at its cheesiest, and I can only imagine those poor children trudging up and down the neighborhood having doors slammed in their faces. Child exploitation at its most heartless. 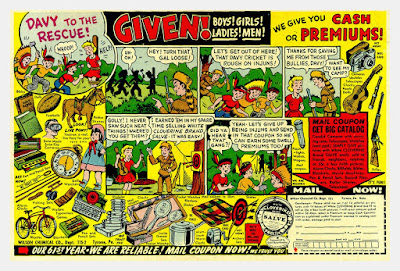 But soft! Cloverine had not yet  finished its cruel deception. In subsequent ads, likely in the early '60s, children were lured by exciting comic-book adventures, only to be seduced by the promise of "getting stuff". One wonders if some sort of legal boundary had been crossed with that early ad, with its dastardly "look - a real live PONY" scam. The premiums look similar, but they are actually squashed down at the bottom of the comic-book adventure. This time you actually see a can of Cloverine salve (which I couldn't even find in the older ad). Truth in advertising? 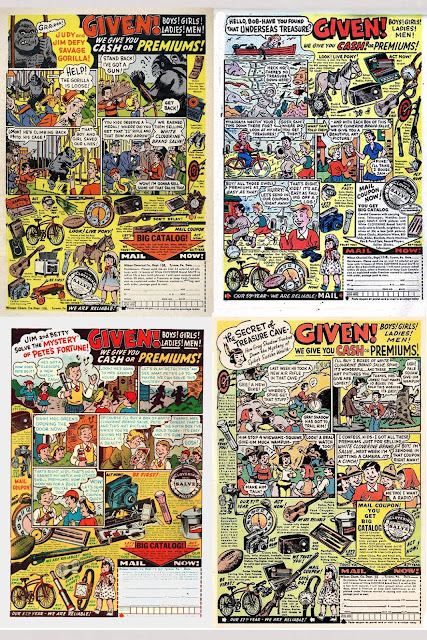 I found a lot of these, so I made a collage. You can't read the typeface anyway, but they're pretty much the same. Two of the four still mention the Live Pony, so I wonder if you actually DID get one if you sold a million dollars worth of salve (and owned a farm).

I don't want to think about all those unsold cans of Cloverine salve. As with those waxy chocolate-covered almonds my kids had to sell for Brownies and Cubs, parents no doubt took up the slack. But at least you could eat the almonds.

And I found this. I don't know what to make of it. An old-fashioned meat grinder, and a. . .

NOTE. Some of the Facebook videos I've been posting have no sound. I'm working on it. Maybe a silent movie is better than the lame music behind some of them! This has only a wind sound, so try whistling while you watch it.