I love Pream ads more than life itself, because they're so odd. (For those who are less than 100 years old, Pream was the first powdered coffee creamer, and it was made of milk solids, which is why it ultimately failed. The damn stuff just didn't dissolve in coffee and turned to sludge at the bottom.)

Oddest of the odd is this lady with her weird facial expressions, which lent themselves to manipulation through screenshots. I was surprised to see how easily I could completely change the look on her face, from puzzlement to near-paranoia.

She obviously has her doubts about that Pream.

Posted by Margaret Gunning at 12:31 PM No comments:

The cat with kaleidoscope eyes

It's rare to see a cat with two differently-colored eyes (heterochromia), but even more rare to see sectoral heterochromia, in which each eye has two or more colors. It gives these cats an eerie look, and as you can tell from the pictures, usually (for reasons unknown) they're white. Except for this remarkable kitty. . .

Those who've been off the internet grid for a couple of years won't have heard of Venus, who has been called a "chimera cat" because she is supposedly her own fraternal twin. In truth, she's probably just an unlikely-colored calico (sometimes called a tortoise-shell or "tortie") who happens to have heterochromic eyes. Other cats have popped up on Google images with similar facial markings, but no other cat has that glamorous blue-and-gold "I vahnt to be alone" gaze. 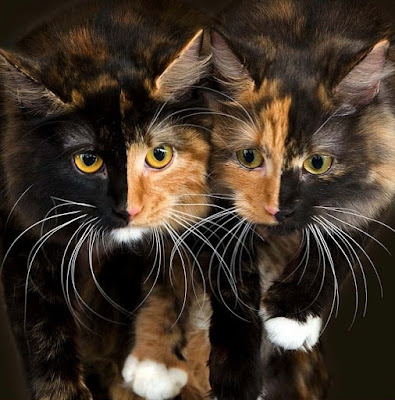 Posted by Margaret Gunning at 12:26 PM No comments:

Posted by Margaret Gunning at 12:23 PM No comments: