All day, all night, Harold Lloyd

I think it started with this one. There didn't seem to be much scope for animation (if you can call it that), but that never stopped me before. The idea is that someone thinks this is a still picture, then. . . OOPS!

Similarly, this thing flips into reverse at the strangest times. This little doll was something you could win as a prize at theatres (I think) where Harold's movies were showing. There are lots of them on Pinterest and eBay, collectibles, though whether they're authentic or not is anybody's guess. The original doll was maybe 10" high and was made of oilcloth. The paper doll version, above, is likely a reconstruction.

I take no credit for these incredible Harold dolls, the likes of which I never saw while researching his life. They are on a site called Red Cap Art Dolls, links below. I might have been tempted then to buy one, and maybe stick pins in it when the novel ultimately failed. Oh well! There's something quite beautiful and something more than a little creepy about this Harold doll, not to mention effeminate. Dolls are innately creepy anyway, as I've covered in many a post. A human in miniature, they invite the best and worst kind of treatment from their owners. Come to that, it sounds like we're talking about children.

I found a total of four photos of the doll: two with hat, and two without. From the four, I made eight frames (reversing each of them to give me that added dimension of creepiness). Then, combining them every-which-way, Harold began to move, rigidly at first, clunkily, and then - as I sped up the frame speed and mixed it up a little - to dance.

I am forever being blown away by the calibre of artwork on DeviantArt.com. I'm not trying to steal it! Really, not. Borrow it for a few seconds, maybe, to make hokey animations out of. Then give it back. But I want you to see this. This artist is called BlueCatNeoguri. He captures something essential about Harold, especially the hairline which is really difficult to "get". It's not a 21st century hairline, because it is combed straight back with a lot of pomade. That's what they did then, but because Harold had thick, black, unruly hair, it was forever falling out of that configuration. It was even curly when wet. That, and his blue-blue Welsh eyes (not apparent here) added to his sexiness.

I didn't make this at all - only made a gif out of an old YouTube video. In those days, meaning the 1920s, this was as good as you could get. There are still a few of these around, rocking back and forth spastically and wincing.  I hate to do this, but here is a closer shot: 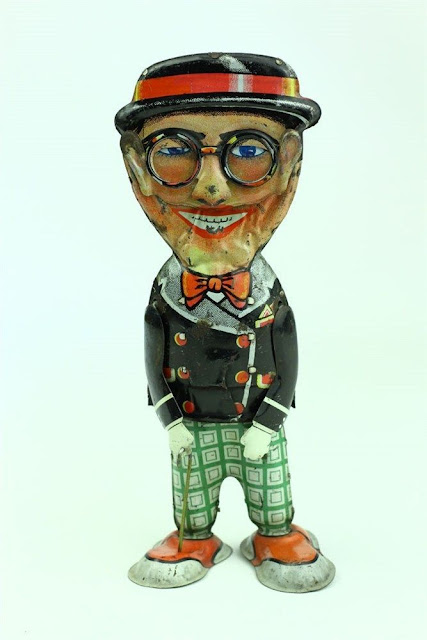 Not a pretty sight. To get the taste of that one out of your mouth, here is one more by the brilliant BlueCatNeoguri of DeviantArt. Christ, how I wish I had talent!: 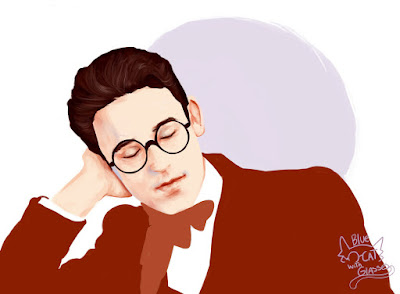