Dumb things that are posted and reposted until they become true! 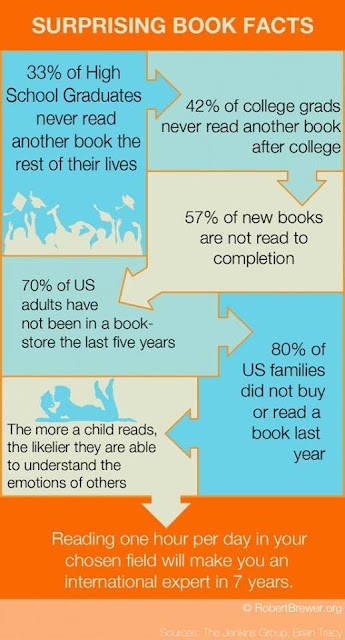 THAT VIRAL INFOGRAPHIC ABOUT ‘SURPRISING READING FACTS’ IS TOTAL FICTION

An infographic meme of “surprising reading facts” refuses to die even years after its own author admitted the statistics were bogus, and after polls have shown that reading is
actually thriving in America.

The infographic, which was created by Robb Brewer in 2011, shares some shocking statistics about how much reading Americans are supposedly doing these days. It claims that 33 percent of high school graduates never read another book in their lives, that 80 percent of families did not buy a single book last year, and that 70 percent of adults have not read a book in the past five years, among other figures. 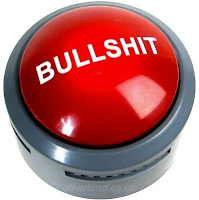 The infographic continues to be shared wildly on Facebook and other social media sites, but there’s only one problem — it’s completely untrue.

Even Brewer, the author of the infographic, publicly admitted in 2012 that he couldn’t back up any of the statistics and asked people to stop sharing it.

“I think it’s safe to say the stats from the original graphic are questionable, and I am therefore recanting any and all connection to them.”

Brewer claims to have used statistics from a survey by an organization called the Jenkins Group, though the group itself says the statistics were incorrectly attributed to them. Brewer has never been able to provide any other source of the numbers he used in the infographic.

The questionable statistics seem to have originally come from a 2011 Mental Floss article, which claimed to have taken them from a Jenkins survey from 2003. Mental Floss has updated the original article saying they have no idea where the statistics came from, either. 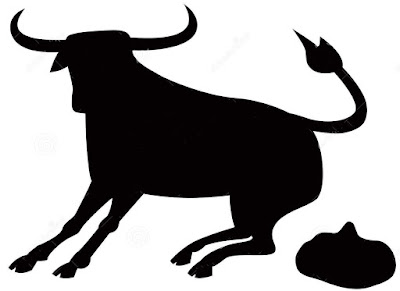 OK - so I have dealt with this one before and thought I stomped it into the ground, but apparently not. One of the smartest people I know on Facebook just posted this thing with an invisible eye-roll, and all her friends chimed in with their ain't-it-a-shame comments.

NOT ONE PERSON questioned the veracity of these "statistics" or even wondered where they came from. Things that are posted and reposted have a when-you-wish-upon-a-star quality to them: if you say it enough times, then it will be true. Or should I say: if enough intelligent people are willing to swallow it unquestioned, then it will be dangerous.

Or so I believe.

I feel a bit sorry (but not too sorry) for this Brewer character, who says he got his stats from Mental Floss (that towering inferno of intellectual prowess), who in turn got them from The Jenkins Group, who say they've never heard of either one of them and had nothing to do with these highly-questionable "statistics". Now Mental Floss is confessing that the whole thing is a complete sham. It's a made-up chart, people, a thing a guy slapped up because it looked kinda good, kinda shocked a lot of people, and went viral before things were even GOING viral. This thing had to get up on its legs and walk, like a chain letter, but it still fooled millions of people, and what shocks me is that it's still doing so. 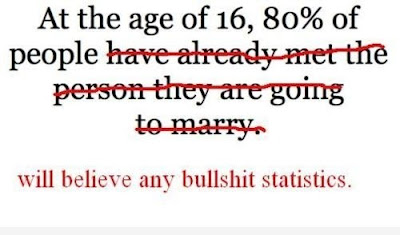 Why did the con catch on, and why won't it go away? Because it's telling disgruntled, disgusted people exactly what they want to hear. It's affirming their ain't-it-awful prognostications, their what's-the-world-coming-to lamentations, and their sense that the whole bloody culture is going to hell in a handbasket.

That may be so, but these stats, with their haphazard, grab-a-handful-of figures-and-throw-them quality, must have been invented by someone, somewhere, at some point. Brewer turned out to be less of a donkey than I thought, because he came up with ANOTHER infographic:

Apparently, even these stats aren't entirely accurate or up-to-date. They have done nothing to erase the wild distortions of the original, and in fact, if people find this one, they tend to say, "Hey, look, somebody's ripping off that cool thing about reading! What a pack of lies."

I personally don't believe anything on either infographic. When I first posted about this, about five years ago, when people were already running around like chickens with their heads off over this irrefutable proof of galloping illiteracy, I had the most trouble with that statement at the bottom, which Brewer (now picking the tar and feathers off his clothing) decided to keep. "Reading for one hour per day in your chosen field will make you an international expert in 7 years." Whaaaaaaat?
Is that some kind of joke?

Notice, too, the citations, or whatever they are, at the bottom of this updated infographic. He's actually telling us that these figures COME from somewhere - he didn't just pull them out of his ass. Now that's a refreshing change. 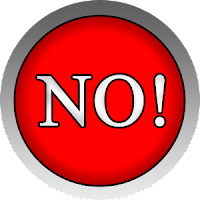 I'm not worried about literacy. Actually I am, terribly, but what worries me even more is that people no longer have that vital piece of equipment Hemingway talked about: a built-in bullshit detector. No, it's all consumed, swallowed whole, lies, truth, info this and graphic that. If it's catchy, if it has bold colours, if it's designed just right, people will not only believe it but keep sending it around to millions of other people, who will accept it without question and immediately hit "share".

About a million years ago I took a communications course which claimed you could "read yourself stupid". I do believe it's true. How does that come about? By being literate as all ding-dong and reading a book every three days, but never THINKING about what you read, never evaluating it, critiquing it or even digesting it. Over time, you will slowly, inexorably lose the ability to think for yourself.

Even worse, you will stop getting out of your chair, stop living and experiencing and writing your own book of life. . . because you will be too busy reading. And if your shit-detector is as eroded and corrupted as most people's have become, you might just be reading yourself into a strange new world of literate  illiteracy.


Posted by Margaret Gunning at 10:11 AM No comments: 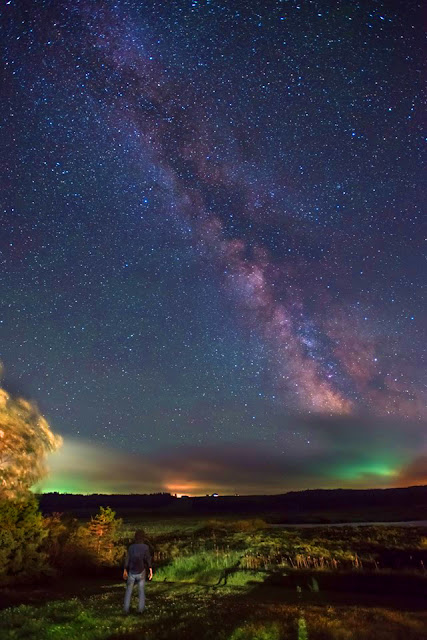 Posted by Margaret Gunning at 10:06 AM No comments:

Scratch me where I itch

Another lovely Nancy Tapley video, two horses scratching where it itches. Horses are herd animals and need each other in multiple ways. One horse is no horse. I wish I had someone to scratch me where I itch.

Posted by Margaret Gunning at 12:34 AM No comments:


Posted by Margaret Gunning at 12:34 AM No comments: