Bosley is the name we gave to a very strange duck who lives with a flock of mallards in Como Lake. We kept wondering why a very large, piebald duck would hang around with wild birds like that. He looked more like a domestic duck than a wild one. Finally, unable to get any information about him, I sent a gif of him swimming to the Cornell Laboratory of Ornithology, one of the world's foremost institutions of aviana/birdology. 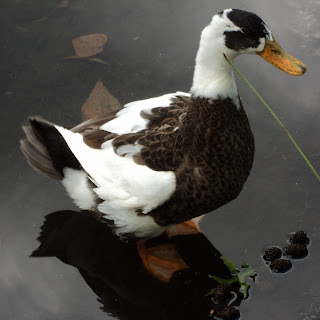 They got back to me right away, to my surprise, telling me that their best guess is that he's a hybrid of a mallard and a magpie duck, a large-ish domestic duck raised for meat. (See example below). It made sense. These ducks are black-and-white, whereas Bosley's markings have the mottled brown tones of a mallard - in particular, a female. 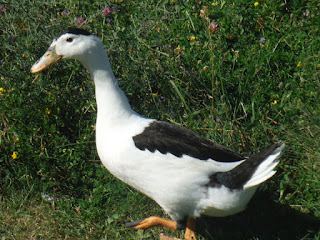 So it shouldn't have surprised us to see a male mallard chasing after her. She was waddling around on land - the first time we've seen her (him? Still not sure) do that. We've been watching her for a couple of years now, and it's amazing how we see her almost every time we visit.  Once when all the mallards had flown away, we saw him (her?) in the very middle of the lake, dabbling and paddling around alone.

I can see why one of Bosley's parents would want to run away from home if he or she were about to become dinner. But it is obvious this is a true adoption. I mean, if the rest of the flock wants to mate with you. . .  The mallard drake might have been pursuing (her) romantically, or chasing (him) off as a rival. But now that I look at that mottled brown breast, I seriously wonder if Bosley is really a Boslette.

It's a funny video, and unique among all our Bosliana. 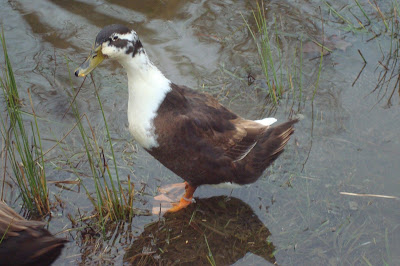 BLOGGER'S FOOTNOTE. I found a very strange group of pictures of ducks very similar to Bosley (see example, above) - only they were even more mallardy (or mallardly) than our Bos. I say more mallardly because some of them even had the iridescent green heads of the mallard drake. This was on a duck forum of some kind, and everyone took a guess at what kind of ducks these were. They came up with half a dozen names of very exotic-sounding purebred breeds. Fuck, guys! These are bastard pretenders, the love children of two duck species, and you cannot admit it because mallards are just too common. They're like pigeons, really. Only little kids like them.

I love seeing and filming the first ducklings of spring, but I was saddened to see this little guy running around peeping frantically. I am almost certain he was separated from his mother, or she lost track of him (not hard to do looking after 24 babies at a time). Ducklings can swim and feed themselves immediately upon hatching, but they have little sense of direction on their own, and have to be herded and tended to keep predators away. A duckling this tiny would be a tender morsel for a crow.

My hope is that he or she found a new flock or clutch or whatever you call those darting swarms of golden fluffballs in the lake. If Bosley can make it with a flock of mallards (I deal with Bosley in another post), maybe this teeny one can rejoin the duck race.


Posted by Margaret Gunning at 12:10 AM No comments: