Posted by Margaret Gunning at 10:23 PM No comments:

On 24 July 2010, a crowd disaster at the 2010 Love Parade electronic dance music festival in Duisburg, North Rhine-Westphalia, Germany, caused the death of 21 people from suffocation. At least 500 more were injured.

The Love Parade was a popular and free-access music festival and parade that originated in 1989 in Berlin. The parade featured stages, but had floats with music, DJs and dancers moving through the audience. The Love Parade in Duisburg was the first time that the festival had been held in a closed-off area. Between 200,000 and 1.4 million people were reported to be attending the event and 3,200 police were on hand.

With the slogan "The Art of Love", the event was one of the program elements of RUHR.2010, an effort to highlight cultural events in the Ruhr area, one of 2010's European Capitals of Culture.

The festival was staged on the area of a former freight station. The capacity of the enclosed location was limited to 250,000 people,[9] but more than one million visitors were expected, based on the experience of previous years.[citation needed]

There was some debate as to how the deaths occurred. Some reports suggested they were caused by people falling off a staircase as they tried to escape the tunnel. However, autopsies showed that all of the fatalities were due to crushed rib cages. A 2012 scientific analysis of the causes of the disaster dismissed the earlier descriptions of the incident as stampede or crowd panic, and instead found evidence for a phenomenon called "crowd turbulence".

The atmosphere was explosive. Many in the crowd seemed to be intoxicated. When people started falling off the stairs and pulling others with them, it became just chaotic. They just couldn't be stopped. It was a living hell.

I will never forget the sight. There were all these twisted-up bodies of those who had been crushed. They were lying at the tunnel exit. Their faces had all turned blue.

Bruce Cullen of Parker, Colorado and founder of Trance Elements, a LoveParade artist/performer on float number 7 - "The Ship of Fools", mentioned that he and other performers were concerned before the event that there would be problems, stating "we all said it seems like this is not going to work". Although Cullen did not witness the actual event, he stated: "These guys didn't have this planned out right", "They didn't have enough police at the entrances in that tunnel. I am just really upset because people died. Everybody was there to have fun".

As a consequence of the disaster, the organizer of the festival announced that no further Love Parades would be held and that the festival was permanently cancelled. Criminal charges were brought against ten employees of the city of Duisburg and of the company that organized the event, but eventually rejected by the court due to the prosecutors' failure to establish evidence for the alleged acts of negligence and their causal connection to the deaths.

None of the involved organizations or officials took the blame for the disaster by 29 July. Instead, the involved parties issued several statements accusing each other in a circular manner:

On 26 July, Rainer Schaller, organiser of the festival, accused the police of mistakes in crowd control, which he claims led to the disaster.

On 28 July, the interior minister of North Rhine-Westphalia rejected this and assigned all the blame to Schaller, his company Lopavent, their security concept and the festival personnel. 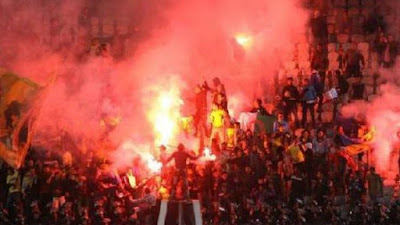 BLOGGER'S LAMENT: I decided to make this into a sort of gif -based essay, with a little help from Wikipedia. It stuns me how many times people have been trampled to death and even asphyxiated in a standing position from the horrific result of gross overcrowding: a phenomenon known as "crowd crush". This term has largely replaced "stampede" as a more accurate way of describing the horrors that ensue when a densely-packed crowd of human beings implodes.

For decades, this sort of fatal collapse of order was blamed on "hooliganism", particularly at British soccer matches where the outcome of games matters more than life - but also at huge rock concert events where all the spectators are assumed to be drunk, stoned and rowdy. But mere rowdyness is rarely the central, fatal issue. Again and again as I researched this, I read about tremendous numbers of people, even more than a million, being crammed into a venue designed for only 200,000. I heard of exits blocked for police convenience, fences erected in the wrong place for crowd control, tens of thousands being directed into small pedestrian tunnels, and gates carelessly opened to relieve crowd pressure which then allow thousands and thousands more people to flood in. With this sort of atrocious non-planning going on, disaster is nearly inevitable. 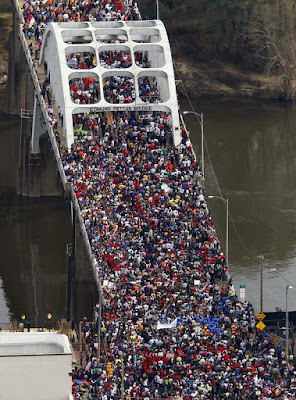 A crowd crush is like cement blocks pressing in full-force on every side. Personal space is non-existent, and violent jostling uncontrollable. If the crowd pushes forward, so do you. You have no choice. The mass of humanity becomes a single living organism, an alive thing with a hive mind.

But what makes me quail - what makes my guts creep with squeamishness - are the shock waves that surge through hundreds of thousands of crammed-together human beings. These do not look anything like the innocuous, cheerful "crowd wave" which we used to see across rows of bleachers. It's more like a climate-change-driven monster relentlessly gathering force, a human tsunami which the individual is powerless to resist.

The five gifs above, which I made from a video of an  Australian rock concert (though I cannot find any information about it) are an especially hair-raising example. We see huge, stomach-dropping crowd surges, seething motion in every direction, wild arm- flails, and the entire crowd jumping up and down in unison. There is even a chilling "sieg heil" salute that shoots up as if by some secret signal. 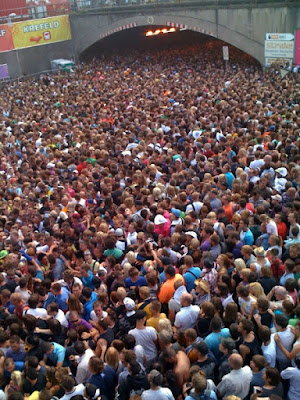 This utter uniformity (which reminds me of some other culture/regime, for some reason) makes a kind of sense. Everyone HAS to do what everyone else is doing, or die as a result. It's some sort of definition of fascism.

So what would happen if one - only one person tripped and fell in this scenario? Almost certain death, as the people behind him or her would not be able to stop themselves from falling into the hole. This would lead to ever more tripping and falling until crushed and asphyxiated bodies are stacked up in a deadly pile.

When I look at these gifs and the seasick feeling they give me, and the ineffectual row of security guards standing still at the edge of the stage, I think: what on earth would they do if something went wrong? What if there were a mass panic and a true stampede, with people unable to see or find their way out? You don't need a fire breaking out for the worst to happen. 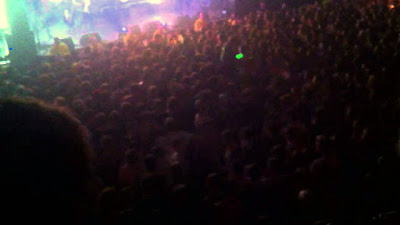 Some attempts have been made to redesign stadiums and concert halls to prevent these horrors, but many sports officials and impresarios seem to think they're just a necessary risk, collateral damage for important events. The underlying feeling is that the possibility of disaster just adds to the excitement.

The most horrific crowd crush incidents have been in the Third World, usually in massive religious processions involving millions of people, where rickety bridges have collapsed and inadequately small tunnels caved in. Over 800 people died in one of these. I can't even let my mind go there.

Humans are clever enough - aren't they? - to prevent this shit, or at least make it less and less likely. Yet it keeps on happening, being dismissed as the result of "drunken hooligans out of control". I cannot think of anything worse than being crushed to death, because death often comes very slowly. It's worse even than drowning, which many describe as "the worst way to die". Some even end up brain-damaged and vegetative for the rest of their lives. It is too much even to contemplate.

Posted by Margaret Gunning at 9:17 PM No comments: