Sad-eyed kitty of the lowlands


Posted by Margaret Gunning at 12:52 PM No comments:

NEVER do this with a horse!


Posted by Margaret Gunning at 12:46 PM No comments:

Yes, I know this is a teeny thing and pretty poor quality. I try to make my gifs better than this, but the only video I could find was part of a great compilation of shredded-up old films. Not only that, but my gif program kept spitting the video out, so I had to use an atrocity called MakeaGif (and by the way, don't) which turns out jerky inferior things. But it was all I had.

The story is this. Before he became the beloved Glass Character who became world-famous and gave my novel/blog its name, Harold Lloyd was just a Hollywood bit player, finding work wherever he could. He had just started putting together a few short, no-budget "knockabout" comedies with his friend Hal Roach, when they had a falling-out, probably about money. Harold "walked", and fortunately he walked straight into the Mack Sennett studio. This was incredibly early in film history, only 1915, but the Keystone Kops were already a huge hit. I tried watching some of these things, and I have to say that they are an unwatchable mess. But back then, audiences loved anything that moved. 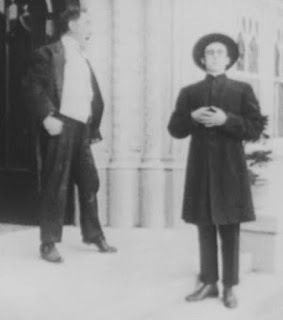 Harold as The Preacher in Her Painted Hero


Harold was immediately hired. He was good-looking, had a way about him in front of the camera, and could play the required straight man, so they plugged him in wherever they needed him. In this case, he's a preacher who comes around to perform a wedding that never happens. We see him only for a few seconds, when he walks in and out of the frame, but there is no mistaking that it's him: the way he carries himself, the ingratiating nod and handshake,  and - why does he keep looking over his shoulder like that? Probably something is going on over there, and his actor's instincts tell him to respond to it. Or not? He was paid something like five dollars a day, not bad for a neophyte like him.

Harold Lloyd was one of those people who had success written all over him. He would succeed at anything he tried, because as mild-mannered as he seemed, he had a volcano inside him. His immense creativity took many forms, and even after the talkies put him out of work, it spread out in so many directions most people couldn't keep up. His sheer intensity was a little bit frightening. Like Chaplin and Keaton, his childhood had been gruelling, sometimes humiliating, as his father continually failed in his ventures and dragged the family from small town to small town. 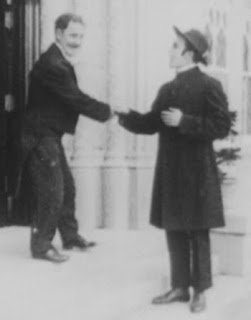 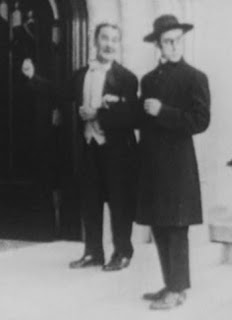 This kind of misery is the final ingredient that makes a brilliant man like Harold Lloyd into a genius. It tempers the steel, so to speak. The need to succeed, to excel, to surpass everyone else becomes overwhelming, imperative. It's also what tugs at us so powerfully. Chaplin had it, and Keaton, that sense of a deep unhealed hurt. Lloyd's comedy carried an unstated question: "Has this ever happened to you?" And we know the answer to that one. His was the comedy of awkwardness, discouragement and social humiliation, an extremely fine line to walk without making the audience become overly uncomfortable. It was only the expectation that he'd overcome all obstacles - including his own rather obvious inadequacies - that kept everyone watching.

There are only a couple of Sennett shorts on YouTube where Harold makes an appearance. I was astounded to find any at all. Court House Crooks was a fairly meaty role for him, in which he plays A YOUTH OUT OF WORK (not even given a name). It's interesting to see that even in this not-very-colorful role, the Lloyd mannerisms are beginning to evolve - the jumpiness, the flopping hair, the astonished facial expressions that convey incipient terror. Harold was 22 years old when he appeared in this movie, and already barrelling crazily towards a success that even he never dreamed of. None of it had happened yet, but in a sense, it already had. He had a date with destiny, an appointment with greatness, fulfilling all those cliches that are now (in these days of near-universal mediocrity) seldom true.

Has greatness eroded by now, so that the world can no longer produce comedic brilliance like this? The forces that brought it about - poverty, stigma, and a tremendous need to please - still exist in spades. But it's a different kind of world now. Harold's mind moved at light speed , but always with a purpose, focused on some creative endeavour. Everything moves much faster now, but with an idiotic lack of real purpose. Things move backwards more than they move forwards. Harold the staunch Republican would be absolutely horrified at the grotesque phenomenon of Donald Trump.

My solace is in being able to make bits of movies that last a few seconds, repeating over and over. I don't know whether Harold would have loved this technology or hated it. Genius is full of paradox, and perhaps he would have despised the technoverse. Either that, or he would have mastered it in seconds. 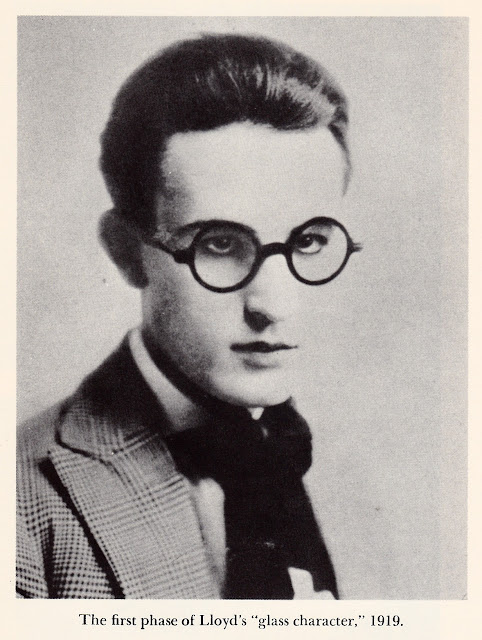 BLOGGER'S P. S.: Just rediscovered these cute little gifs which I made during my long-ago Gifsforum days. Actually, they look like shit! I have all these fond memories of Gifsforum (which suddenly expired a few years ago with no explanation), but maybe I remembered wrong - or, more likely, the overall technology has improved.  I suspect Gifsforum morphed into MakeaGif, which is REALLY a piece of shit.  Anyway, these are all of ten seconds apiece, but they show some of the more action-oriented scenes.