Very dear to me

Posted by Margaret Gunning at 12:39 AM No comments:


Posted by Margaret Gunning at 12:38 AM No comments:

And here is the latest edition of "it might be food". You have probably noticed (or not!) that one of my recurrent obsessions is "bad old food": specifically, horrendous recipes from the post-War era that people must actually have prepared and eaten. In some cases, it's almost understandable: food rationing was a reality, giving rise to such monstrosities as "apple pie" made entirely of Ritz crackers, and "mock duck" (cheap chuck beef pounded thin and wrapped around bread stuffing, tied with string, and baked.) Real meat was almost nonexistent, except for the canned/processed variety made of lips and ears and other floor-sweepings.

Gelatinous things abound. Molds seem to be an obsession. My mother had an entire set of copper jelly molds hanging on her kitchen wall. I confess to you right now: I have a jelly mold (they're never called Jell-o molds, though that's all you do with them). It's shaped like a strawberry and it's hanging on my kitchen wall. I just thought I should have one to have a proper kitchen. I sent away for it, I remember, to the Jell-o Corporation, sending boxtops or whatever, and two dollars. I also have a very nice recipe box made of blonde wood, which I also sent away for, God-knows-how-many years ago. It has an image of a giant cartoon Chip-it burned into the front, causing me to cover it with stickers which I have to replace every few years because they peel off. These days I use those nice free ones from the Humane Society.

I wonder if this sending-away stuff hearkens back to my childhood, when I had to send so many box tops to Battle Creek, Michigan, to receive my swell plastic submarine (operated with baking soda to make it go up and down) from the Kellogg Corporation. 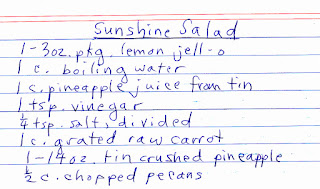 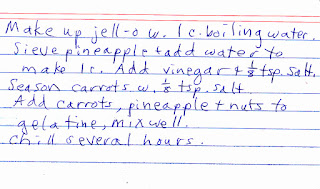 Old things stick, they stick around. Or they did. I don't know if they do now or not. I'm too old to know what younger people do. We look back at these recipes, and - ugh, they seem horrendous, but I did eat similar things back then: creamed chipped beef on toast; fried bread; pork hocks (jellied pigs' trotters); and Jell-o molds of all kinds, usually with cottage cheese heaped in the middle (which no one ate) and pointless sprigs of parsley that were always thrown away.

There IS a good Jell-o mold called Sunshine Salad, not very sweet, but you have to like pineapple and grated carrot, which I do. The gelatine is tart and contains nuts.

My gif slideshow maker, which has been working overtime lately, doesn't like these recipe things because they are all different shapes and sizes. So long as the ratio is the same (i. e. if they're all 8 x 10 or 4 x 6), it's cool. These were wildly different, so I had to put up with white borders, but the hell with it, it's Friday and who has the time or the inclination to try to get everything to be the same ratio? I've done a couple of these presentations - cuz I like doing them - and in this case, I really tried to pick recipes I haven't included before. That isn't too difficult, because the list seems to be endless.

By the bye-bye, if you like this sort of thing, you'll probably love the YouTube channel below, which is entirely dedicated to testing (and eating, or trying to eat) vintage recipes. I just discovered it in the last two minutes and plan to explore it further.

I am sorry for this. I was putting together a post about terrible recipes, and the rabid urge to animate swept over me once again. I couldn't contaminate my post with such a thing, but somehow couldn't delete it either. At least you were warned.