Bear video of the week!


Posted by Margaret Gunning at 12:22 AM No comments:

Beatty was given the wrong envelope and thus co-presenter Faye Dunaway read the wrong winner for the best picture award. There was an historically chaotic scene and MacLaine, who had presented an award just before, was in the audience watching.

“I think we’re all processing the horror of it," MacLaine tells USA TODAY. “I’m still dealing with it.”

“I’m concerned with how (Beatty) must have felt being so close to him. I’m three years older and I’m protective," MacLaine says. “We know how difficult it was for him, but it was also for me.” 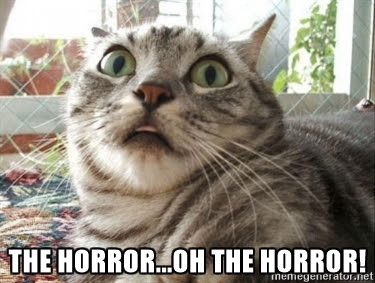 MacLaine, 82, says she called Beatty, 79, "immediately" after the show.

"He was backstage dealing with what he was going through. He didn’t answer his phone," MacLaine says. "And then I called the home and (wife Annette Bening) answered and we talked. And that’s all I’m going to say.”

MacLaine stopped briefly at the Governors Ball party after the show. But ended up heading out.

"I just wanted to go home. It’s something to really think about, what if it happened to you?" MacLaine says.

“I’m basically a mystic. And I’m wondering what was that all about? And I am not sure yet. I have to think about it some more," says MacLaine. “The one thing you learned about what occurred at the Oscars is that every instant of life is important. And anything like that can happen to you, driving in a car, leading a seminar, working at your desk and presenting an award." 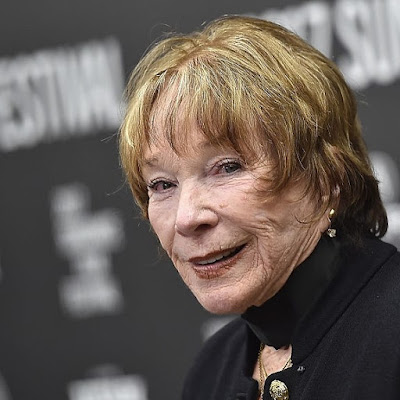 Blogger's Commentary. It's hard to know where to begin here, but at the same time, I really don't need to say anything, do I? When you think of the real horrors that have happened in recent times with terrorist attacks in public places, the bloodshed and mayhem, this was a harmless little boo-boo which should be laughed off. It was NOTHING compared to those atrocities.

The implication is that in a spectacle as posh and elite as the Oscars, you can't have anything embarrassing or painful happen. It's like a rich man suffering misfortune. Everyone gasps, not in horror so much as surprise.  A mistake has been made. Wait - what?

No matter what the Academy believes, the Oscars is (are?) not immune to real horror. That "improvised" episode with the busload of tourists (not spontaneous at all but carefully planned and rehearsed) included a convicted felon who had just gotten out of jail for, among other things, attempted rape. He glad-handed and stole the show for several minutes. Obviously, Oscar security was lousy if it let a scumbag like that enter the building, let alone hog the spotlight for several minutes. 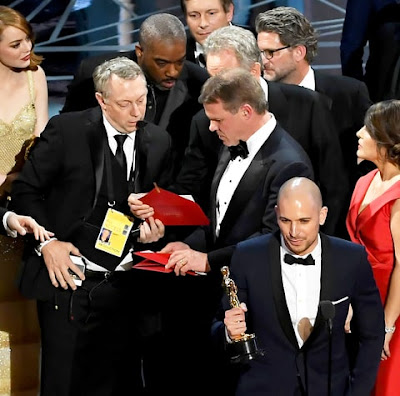 All this bumph about how meticulously-prepared these shows are, about how many fail-safe systems they have built in so that NOTHING can go wrong. . . it makes me feel worse, actually, about that convict getting in and flying under the radar. Think what might have happened if his mind tilted in a slightly different direction, or if he was slightly armed.

So now we have this shrivelled old grand dame who is "basically" a mystic (so she doesn't come with mystical accessories?), calling the Best Picture bleep-up a disaster on the scale of the Titanic. I used to like Shirley MacLaine, but something happened to her at some point. Her values, if she ever had any, have disintegrated. "Processing the horror", indeed. It was a mistake, Shirl, so get over it. By Oscar standards, it was a big one. There will be repercussions. But no one was hurt. No one died.

And everything else is replaceable.

Posted by Margaret Gunning at 12:21 AM No comments: