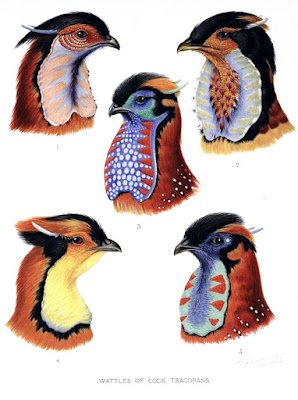 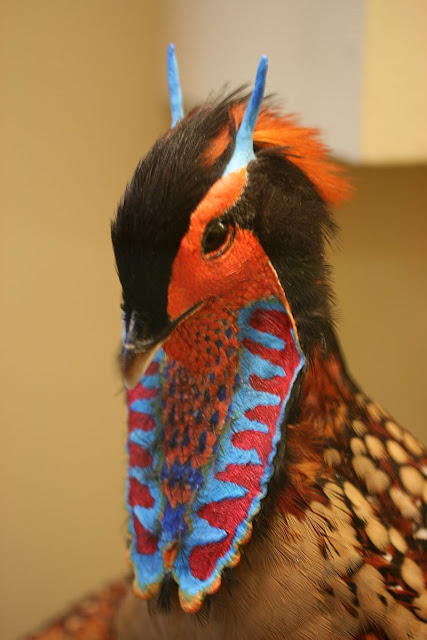 (Note that the satyr tragopan, not the brightest of birds, is extravagantly performing his courtship ritual for a log.)


The satyr tragopan (Tragopan satyra) also known as the crimson horned pheasant, is a pheasant found in the Himalayan reaches of India, Tibet, Nepal and Bhutan. They reside in moist oak and rhododendron forests with dense undergrowth and bamboo clumps. They range from 8,000 to 14,000 feet in summer and 6,000 feet in winter. The male crimson horned pheasant is about 70 cm long.

When it is mating season, male satyr tragopans grow blue horns and a gular wattle. When ready to display, they will inflate their horns and hide behind a rock, waiting for females to pass by. When one does, they will perform an elaborate and attractive display in front of the females. At the end of the display, the male will stretch to his full height and show off all of his ornaments.

Females are brown. Males are usually red with blue, black, and white spots and freckles.

Posted by Margaret Gunning at 6:10 PM No comments:

Posted by Margaret Gunning at 2:49 PM No comments:

I didn't make these gifs, by the way. Some of them are fairly sophisticated, like this PicMix. MY PicMixes don't look like this. They look like they were made with mud and a Popsicle stick. Note the rather creepy way the Madonna-like figure blinks. Her hair moves, as does the head of the kitten. These things often have cats looking out the window. It's part of their cheesitude.

Most of the more scenic gifs I've collected (mostly from Facebook nostalgia pages, not that I ever go on them) aren't included here because they're too nice, I mean too normal, but the sheer busy-ness of this one makes it qualify as officially cheesy. The maker of it probably thought, the more stuff is moving, the better. I don't know what half of it is.  And oh, look - there's a kitten! See it? Its tail is moving and everything.

This one is a masterpiece. A sleigh with two horses just materializes like Aladdin rising out of his lamp, then slides rigidly straight down the hill as if the horses had snowboards attached to their hooves. Which, perhaps, they do.

This one has very good intentions, and I have to confess I have no idea how it was done. Makes my own efforts look pretty crude. It is, however, extremely brief, maybe 1 1/2 seconds long, and frantic. And note the small ginger cat pawing at the window. Closely resembles the small ginger cat of gif #1.

Maybe I should dispense with my primitive flip-pictures and start doing stuff like this. Trouble is, lots of people are generating these things already. A Saint Bernard rocking a baby's cradle with its paw is some sort of pinnacle of cheesitude. Those things in the air bother me, though. Bugs? Dog dander? Who knows what.

I don't understand this one, at all. The poor fellow must have dropped his briefcase into the ocean. Or something. What's that white thing, why the dead flowers? Too poetical by half. Reminds me of an old commercial for Dristan, where a guy goes to Arizona in his briefcase.

I remember when this sort of thing was all you could make. Sparklies or whatever they were called. Gifs had not been invented yet. Blingee has ceased to work for me, and in any case was extremely limited. PicMix animations often don't move very much - animals look as if they are suffering seizures or death throes. This one is merely oversparkled. Nothing much else is happening in it. It would have been a nice cheesy touch if the hands of the clock moved around.

There's that kitten again, pawing at the window! More of a tabby this time. Birds or something go endlessly surging up. I keep thinking I see someone sitting out on the porch, but it couldn't be. There's simply no one out there (Twilight Zone music).

Similarly, we have these nymphets with things buzzing around them and the air kind of pulsating. At least there are no cats.

Why is it that when I make a PicMix, I can't get a fairy to dance behind my cookies? I am not sure what the fairy is doing there during coffee break, and I don't understand the wild geese very well either, because they never seem to get anywhere, but they look sort of nice. The whole thing is nice, but a little strange.

I've saved the cheesiest (and creepiest) for last. The little girl seems to sort of seethe in the frame, warping oddly. Reminds me of those optical illusion effects I suffered from earlier today from staring at a YouTube video meant to induce hallucinations. (It did.) A dog's tail shimmies back and forth. And lo! we see another kitten, lying on the sofa under a blanket, and seething in time with the little girl. That makes five cats, and only three dogs, so the cats win.

Why can't I make gifs as cool as these??

Posted by Margaret Gunning at 11:03 AM No comments:

The way Bentley drinks is weird!

The way Bentley drinks is weird. He must like the taste of wet paw.

Bentley is the best cat ever.