Yes, there really IS a Pogo cartoon!

This is fascinating! It's a kind of sketch or early draft by Walt Kelly for a Pogo animated cartoon. This had already been done, abominably, by Chuck Jones, who somehow got the rights from Kelly. The two cartooning styles didn't mix, and the results were characterizations that were just "off" in every conceivable way. June Foray voiced Pogo in a sugary little-girl voice, a cross between Rocky the Flying Squirrel and those screechy princesses she did on Fractured Fairy Tales. The animation was similarly out of whack. These creatures just weren't from Okefenokee Swamp, or anywhere else for that matter.

I don't hate Jones. Some of his stuff is brilliant, and the Grinch (the original) will never be equalled. But somehow or other, this thing didn't gel.  Kelly frankly hated the result, which was aired once and shelved, but which you can still see (of course!) on YouTube.

This, though, is a treasure, a stumble-upon while dredging through an underground maze of Pogo-files. Though this isn't the final animation and only involves a few frames per second, it still has a sense of movement and grace. And it's Pogo-ish. Kelly does ALL the voices himself, which I think is a clever dig at Jones and the atrocious choices he made in voice characterizations.

This little fragment has an environmental message which was far ahead of its time.  Kelly only lived to be 60 due to grossly-neglected diabetes which caused him to go blind and lose a leg. Considering all this, these preliminary sketches are remarkable. They're some of the last creations of a dying man.

Think of how it would have been! Just picture it. It would have been like being right inside those Sunday colour comics with all our quirky old friends. But it was never to be.

Posted by Margaret Gunning at 6:20 PM No comments:

My best animation yet!!

This is my Martial Arts Guy, and to be honest I didn't create him. But I DID make him move. I mean, he used to look like this: 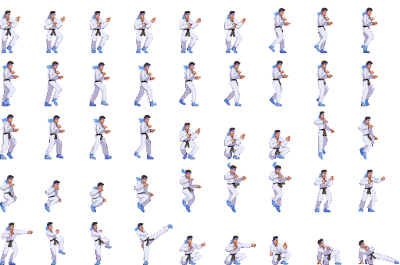 And now he moves.

It would be preferable if I could draw or paint these figures - I'm working on it, doing something from scratch, though it would help if I had some talent in that area. I did a bit of abstract painting - a bit, my God, it lasted about a month before I realized it was pretty much crap! But  I just have this mania for making things move right now. Never mind that I've never done it, don't know how to do it.

I pulled out a few favorite frames and ran them through the animator again.. Here his lameness is evident. Or he's walking on uneven ground.

This is just all of his best moves.

Posted by Margaret Gunning at 12:44 AM No comments:

A better choice for President?

There aren't many Pogophiles left in the world. I think most of Walt Kelly's cartoons went out of print a long time ago, though he makes brief appearances on the internet. But just sort of scattered around.

I was raised on Pogo. I may even have a raggy old Pogo comic book left somewhere, its cover torn off, with pencil-printing and scribbling all over it from four little kids learning to write at different times. For some reason, certain books became scribblers for us. (Scribblers being, for my American readers, things you scribble into). We also had a Pogo hard-cover book, a real luxury, which included many of the early scribble-books in one luxurious volume. It never had a cover on it in my memory. And then there was a weird and wonderful record album called Songs of the Pogo, which you can listen to right now if you want to:

As with the rest of Pogo, the songs were written in a smart-assed double-talk that no one could decipher. It wasn't meant to be deciphered, as it was just too  twisty-turny and pun-laden to be understandable (and yet, there was meaning in it too).

Just off the top of my head:

I was stirring up a stirrup cup
In a stolen sterling stein
When I chanced upon a ladle
Who was once my valentine:
"O wence that wince, my wench?" quoth I,
She blushed and said, "Oh, sir -
Old Daddy isn't stirring since my Mama's been in stir."

I made an attempt to transcribe a few more of these, and I just couldn't do it. Maybe they aren't meant to be written down, but only heard. 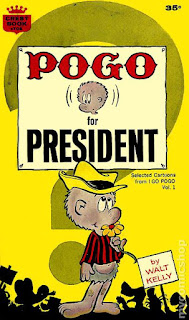 As a kid, I was by far the youngest, a full thirteen years younger than my eldest sister. That means I was, in essence, surrounded by adults. They all seemed to know what Pogo meant, what the words were all about. I had no idea. In fact, the older I got, the less sense they made.

No one ever explained any of this to me. It was like Ernie Kovacs (one of my very first memories), completely incomprehensible to me, though I was sure the adults knew what it was all about - and that I SHOULD know, but was just too slow and dense to pick it up. So I dared not ask.

When they went and put me in something called a Major Work Class in Grade 5 (in essence, for kids with abnormally high IQs), I was completely shocked. Up until that point, I had known all my siblings were smart, but assumed that I wasn't.

Pogo is stashed pretty far back in my mind, though I did find a nice Pogo for President sign during the horrors of the election. Then today I found a bonanza: a story called NO, which I'd never seen before, though I do remember hearing an odd recording of it which was an add-on to a CD re-release of Songs of the Pogo. 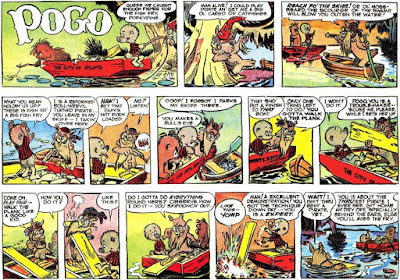 I first discovered some individual panels from NO on Google, but I never thought I'd find it all. Today it appeared on somebody's blog, all 28 pages of it, and the pages were all the same size! So I was quickly able to make one of my little gif slideshows out of it, which you see at the top. As far as copyright and all that, what the hell can you do? EVERYTHING is on Pinterest and other "shared "sites now, and it is impossible to find the provenance of anything. It can't be done. Everything on Facebook is shared. I am easily able to "embed" Facebook videos on my blog, because there is an "embed" setting that allows you to. . . embed. If they didn't WANT you to embed, why would it even be there?

Everything belongs to everyone. Is this Communism in action?

So anyway, I made a giffy thing with the whole story (at the top, did I say that?), though of course the problem is the speed of it. Like all of Kelly's stuff, it's very talky, and this increases as the story wears on. This is about as slow as these gifs go, so the large amount of text at the end might be tricky. But the thing goes around and repeats endlessly, and there are page numbers at the bottom which are a help. (Page numbers are heaven to me, as are indexes. Sometimes I wish fiction had indexes.)

Should I now make PicMix bling-pictures of these? Not sure how I'd do it, but who knows. If I can bling Hilda, maybe I can bling Pogo.

ARCHAELOGICAL DIG DEPARTMENT: dig this! These are just a few images from the brown, crumbling Pogo book I still have on my bookshelf. It was published in 1951, three years before I was born. The first one is a scan of a "thing" that looks like a chunk of papyrus or mummy-wrapping. Was it ever rectangular? It's hard to believe. There is some serious mathematics going on here, whatever it means, and someone has written something that looks like Pagor in primitive cursive. 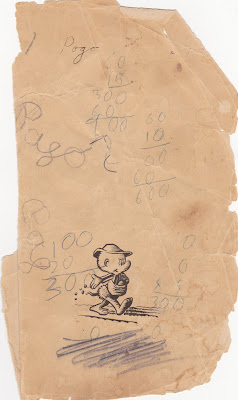 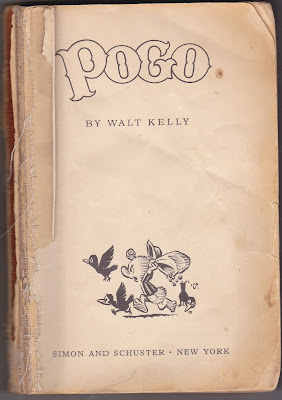 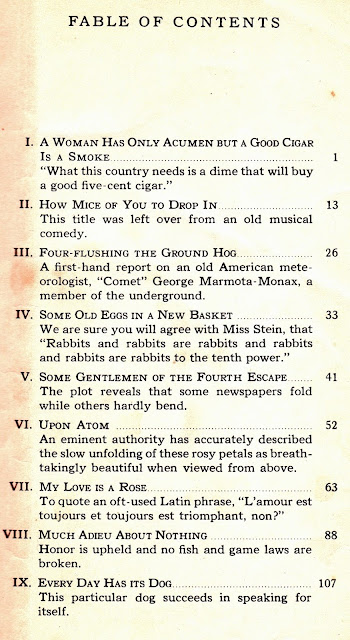 For those who are not familiar with Kelly-esque
linguistic arabesques, here's a sample page of it. 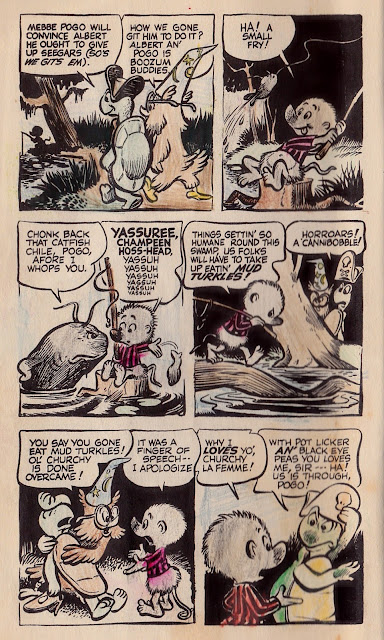 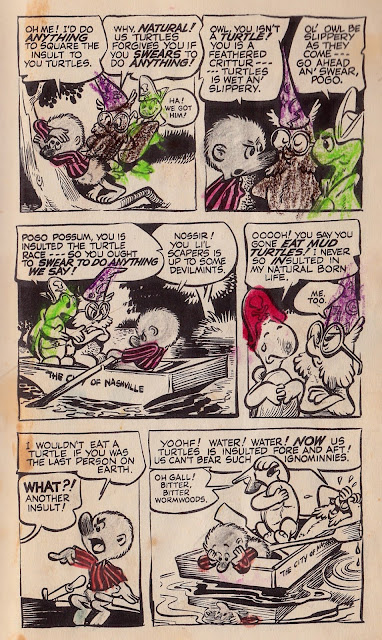 I had forgotten, if I ever knew, that "someone" coloured in some of these pages. The same thing happened to my lovely Wesley Dennis pen-and-ink drawings in my copy of Misty of Chincoteague. (Come to think of it, it wasn't even my copy. My brother Walt owned it and passed it down to Arthur, who passed it down to me. Nothing was mine when I was a kid: in every picture I can find, I am wearing boys' clothing that has been handed down twice.) The colouring is bad enough that this might be my handiwork. Howland Owl looks pretty scribbly. But then. . . isn't scribbling what it's all about?

Incredibly, the first title I considered for this blog was Scribble Scribble. Then it was Margaret Gunning's House of Dreams: intentionally sappy and Barbie-ish, but I changed it when some bitch pronounced my blog "embarrassing". But that was after my piece about how nasty Lloyd Dykk was, which didn't go down well with people after he died.

I honestly think, to this day, that he would have found it entertaining.

Posted by Margaret Gunning at 12:42 AM No comments: