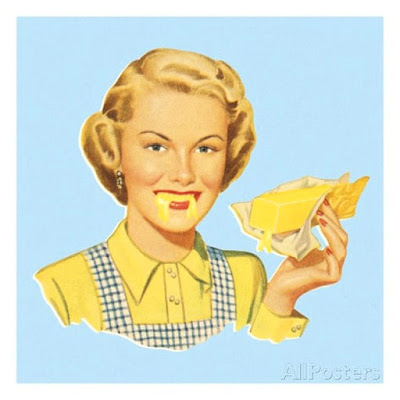 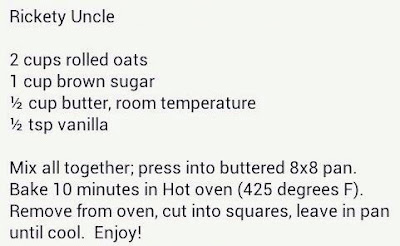 There's something I do, and I guess I had better talk about it now. When I am sitting there vegetating in front of the TV, craving something sweet, sometimes I Make Something.

It isn't even a "thing", just a mixture. You know how cookie dough tastes about one thousand times better than the actual cookies? I try to make something that approximates cookie dough, or brownie batter, or whatever, but on a small scale. It never works. Butter, sugar, cocoa, etc. - blecccch, but I usually eat it anyway.

I love the topping for apple crisp, and have tried to make something like it. Just the topping. It never works, because you can't cook it. But raw oats and Crisco and stuff -  how could it fail?

So yesterday I see a bizarre recipe on a Facebook page called Vintage Recipes. Here is what the original looked like: 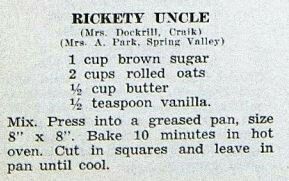 It made no sense. Seemed to be some sort of square, but it had no flour in it, no eggs, just butter and more butter. But it only had four ingredients, which I liked.

The name, though - what the hell - ?? WHOSE uncle, and why is he so rickety? For some reason I kept thinking of Ricky Ricardo (dough - see? D'oh). 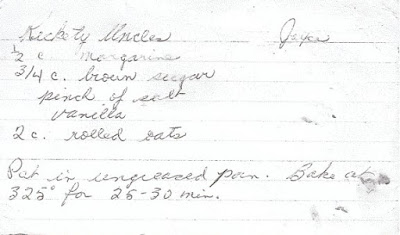 I did some research on this odd-sounding thing, and to my amazement found only ONE YouTube video on it, with a completely different recipe. Normally anything edible has literally thousands of versions, including a very smug, perfect version by Nigella Lawson. Remember the sponge toffee/honeycomb/hokey-pokey/yellowman, etc., that never turned out and, because the syrup was volcano-like on the stove, could actually be hazardous to your health?

I also found two handwritten "vintage" versions of this recipe - hey, we used to throw all these things out once we got computers! There would be no more cookbooks, remember, and you could throw out that old box with your handwritten recipe cards in it, too. That included the ones passed down from your mother, your grandmother and your great-grandmother, who were obviously hopelessly low-tech. We no longer needed those embarrassing brown cards with the tatty edges, so old and spilled-upon that you could hardly read them. From now on we'd cook directly off the computer screen.

Now those tatty old brown cards are precious beyond measure, and people are making gazillions of dollars posting them on their cooking blogs.

So did I make this drunk-uncle stuff? Of course. When I mixed it up, with my hands of course, it was, well, sort of like the topping for apple crisp, but without any flour. And it was sticky and very greasy from all that butter. I didn't take any cute photos or a YouTube video of me making this, partly because I miss making videos with Caitlin so much that I want to howl sometimes (but just getting her to speak to me is a major triumph, now that Grandma has become obsolete).

But it all comes out the same, I think, kind of like this: 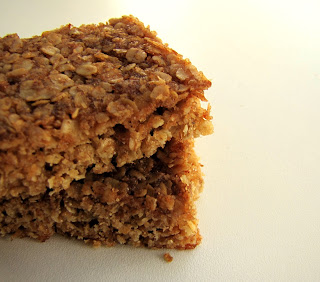 I tasted one, and butter gushed out of it and oozed onto the kitchen floor and made a dangerous slick. I had to put up a traffic cone. Nobody warns you about these things. As with all those hokey-pokey recipes, food bloggers always claim it's "easy to make, fun and delicious".

I don't think I have ever had an internet recipe turn out. The "magical three-layer cake" was a flat grey custard that I threw out after two days. Nobody wanted to eat it. You already know about the sponge toffee, the seven tries. Mug cake! Back when the grandkids acknowledged me, our various attempts at it were hilarious.

This might be OK after a couple of days. Maybe it needs to mellow, like shortbread. Who knows. 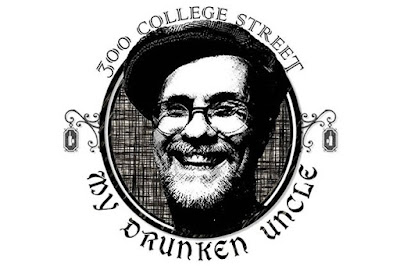 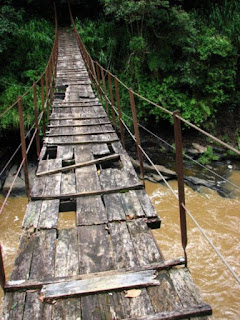 RICKETY POSTSCRIPT. They didn't get better with age. Not really. I kept eating them, hoping the next one would be better. After four of them, I began to feel sick and to think, "I'm going to gain two or three pounds just from eating these things, and they're disgusting." So they went into the garbage.

But I did not totally give up on this recipe. I love butter and brown sugar mixed together, and while making the original batch I kept tasting the raw dough or sludge or whatever-it-was, and it had a delightful buttery, sugary flavor. Tonight I decided to scale the recipe way down: 4 tablespoons rolled oats, 2 tablespoons brown sugar, one tablespoon butter (melted). Mixed it together with my hands, and began to eat it with a spoon.

Not. . . bad! It had a salty-sweet taste from the sugar and butter, and the oats were kind of like horse fodder, substantial to chew. I would make this again, to eat on the spot, but now I'm trying to find a way to add chocolate to it.

Posted by Margaret Gunning at 1:00 AM