The old hound wags his shaggy tail,
And I know what he would say:
It’s over the hills we’ll bound, old hound,
Over the hills, and away.

There’s nought for us here save to count the clock,
And hang the head all day:
But over the hills we’ll bound, old hound,
Over the hills and away. 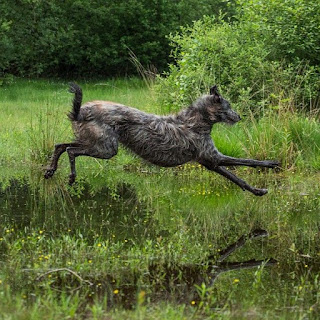 Here among men we’re like the deer
That yonder is our prey:
So, over the hills we’ll bound, old hound,
Over the hills and away.

The hypocrite is master here,
But he’s the cock of clay:
So, over the hills we’ll bound, old hound,
Over the hills and away. 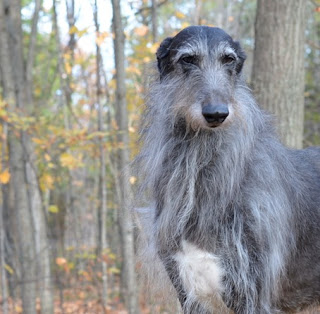 The women, they shall sigh and smile,
And madden whom they may:
It’s over the hills we’ll bound, old hound,
Over the hills and away.

Let silly lads in couples run
To pleasure, a wicked fay:
’Tis ours on the heather to bound, old hound,
Over the hills and away. 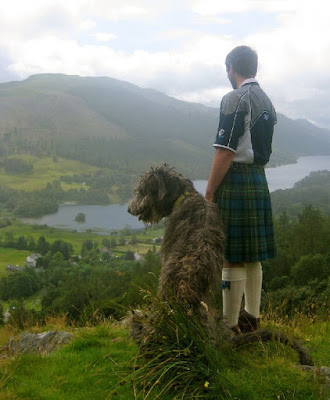 The torrent glints under the rowan red,
And shakes the bracken spray:
What joy on the heather to bound, old hound,
Over the hills and away.

The sun bursts broad, and the heathery bed
Is purple, and orange, and gray:
Away, and away, we’ll bound, old hound,
Over the hills and away.


Blogger's lament. This is my second attempt at this post. Why? Why, you ask. In attempting to post a superb video about a Scottish deerhound leaping and bounding around, which would have perfectly illustrated the above poem, I deleted some sort of code - the wrong one, apparently - and the entire post disappeared.

There is no recycle bin for this thing, so deleted is deleted. The police won't look for it, so no one will find it. 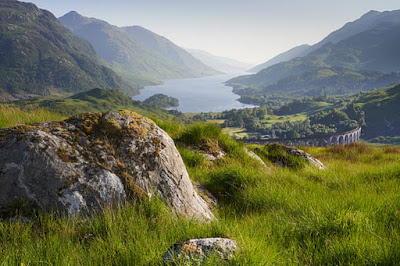 So I will try to reconstruct it from memory.

The video of the sheep jumping crazily around filled me with such joy that it awakened a memory of something we used to sing in school. The piece was a tweedy, ruddy English thing, an adaptation of the George Meredith poem which the school choir sang in the Kiwanis Music Festival: "It's over the hills we'll bound, old hound,/Over the hills and away!". It was a common enough choral number then, and I expected to find a nice YouTube video of it somewhere. But I couldn't find any trace of it, on YouTube or anywhere else. Led Zeppelin recorded something called Over the Hills and Far Away, but I knew that wasn't it.

The poem is good enough to stand alone - I guess -  but when I can't find something. . . What annoys me is that it's harder than ever to find things on Google or YouTube or anywhere else, due to sheer volume and congestion. Every day millions more entries are added. This harms, rather than helps your search because of all the CRAP in the way.

This reminded me of something else I tried to track down the other day, and couldn't.

I even remember making gifs of it (and please forgive me for not using GIFS - capital letter always seem to scream at me), but I can't find them anywhere. This is odd, because I always save the gifs I make - I have thousands of them by now. It was an old cartoon - I assumed Disney, because it was one of those sylvan things where nymphlike creatures frolic around, wearing practically nothing. You know what I mean - they're dancing and capering around in a village with thatched roofs, etc., while a man sings in a very high voice.

But that's not the part I wanted.

At a certain point in this pastoral scene, a bunch of the cherubs or whatever-they-are were pulling on a massive bolt which held a huge sort of gate together. They tugged and tugged on it, and when it finally came loose an explosion of water burst out, causing a massive river to tumble and cascade down the dry rocks and hills. It was extremely erotic, and I remember playing that bit over and over again. The animation was, as I remember, outstanding. Animating water convincingly is no small feat. I thought of The Sorcerer's Apprentice in Fantasia, with a doomed Mickey swirling down the drain, his mouth open in a round black O.

I'm trying to remember ANY other identifying details of this cartoon. Disney? Fleischer? Warner Bros.? Merrie Melodies (not likely!)? Happy Harmonies? Silly Symphonies? Obviously every studio had a version of this: cartoons that were churned out weekly for theatrical release. This one was colour, in my memory at least, and the little creatures reminded me of those cherubs in Fantasia:

(I only had three frames to work with here, so pardon the jerkiness.)

It wasn't Fantasia. I checked. I went through synopses of all the Silly Symphonies, including the much-hated Bugs in Love (which was always being shown on the Mickey Mouse Club, much to our disgust. By that time, Hanna-Barbera had become the standard.) Water Babies, a Disney Silly Symphony from which I made these three gifs, was downright disturbing to me because of the excessive focus on small children's bare bums. At least, they look like small children. Was sexual abuse so unthinkable then that child nudity passed without notice?

After much fruitless and boring searching, I've given up on the lost cartoon. It will ever remain a memory. Though I wish I had some idea how to describe it to Google.

Blogger's afterthought. The more I look at that George Meredith poem, the more alarmed I become. The guy is not just a misogynist: he's a misanthrope, apparently hating the whole human condition. The poet is sick of watching the clock in depression, tired of the hypocrisy of those who seem to hold worldly power. In the company of men, he feels like "prey" (the deer, usually the target of such romps). The "cock of clay" line confused me, until I realized that the guy is fantasizing about skeet-shooting, with his enemies as the target.

And women! Forget about it, they're all tarts and temptresses. But boys pose even more of a dilemma: "Let silly lads in couples run/To pleasure, a wicked fay". I found one meaning of "fay" which kind of disturbed me:

fay (third-person singular simple present fays, present participle faying, simple past and past participle fayed)
To fit.
To join or unite closely or tightly.
To lie close together.
To fadge.

So, to fay is to fadge. Right, it all makes sense now.

The last two verses, which I remember because the tempo changes at the end, are gorgeous:


The torrent glints under the rowan red,
And shakes the bracken spray:
What joy on the heather to bound, old hound,
Over the hills and away.

The sun bursts broad, and the heathery bed
Is purple, and orange, and gray:
Away, and away, we’ll bound, old hound,
Over the hills and away.

On the last verse we sang, "The sun. . . bursts. . . broad," the part of it which stayed in my head, along with the purple, and orange, and grey. "Over the hill" can of course be a synonym for "old and obsolete", but Meredith doesn't seem to mind: his greatest desire is to get the hell away, as far away as possible, from the whole chaotic human mess. 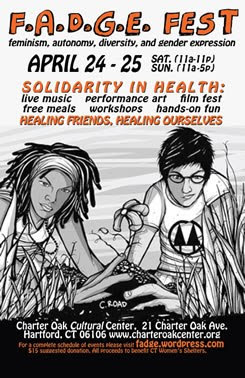 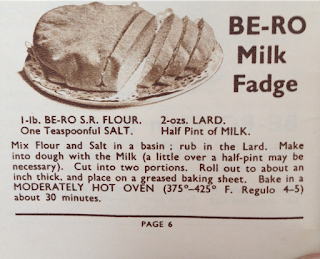 Posted by Margaret Gunning at 11:09 AM