Even if he did call my novel "forgotten" (which it IS, damn it) in one of his columns. Oh well. I don't know if I could've gotten that novel written without his support.

Do you think I'm on a kick here with these giffy-slide-show-type-things? Could be. Takes up less room, anyway.

Posted by Margaret Gunning at 12:55 AM No comments:

Bentley is a Christmas kind of guy. Just tonight I caught him skulking around under the Christmas tree. When I tried to take a picture of him, he lunged at me, but it was a friendly lunge.

Bentley roasting by an open fire.

Is. . .is there a cat in there somewhere?

Bentley has brought me so much joy!

Why Ryan is such an awesome kid! 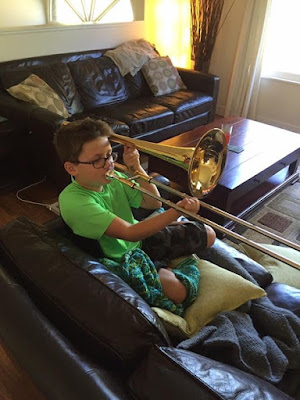 For one thing, he plays a trombone that's bigger than he is. He could've played clarinet in band - even a trumpet - saxophone, those are cool - but no. It had to be trombone. 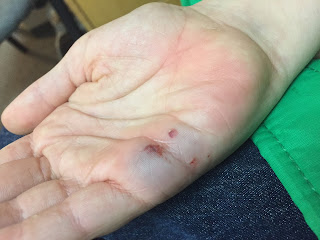 Playing an instrument like this is hazardous. Musicians are vulnerable to certain kinds of injuries, and this one was particularly painful. While putting his instrument together, his hand was literally pinched in the slide, necessitating a trip to Emergency. There was just one problem. . . his Taekwondo red belt test was in a couple of days. Obviously he'd have to cancel. This is a very big deal because the whole class takes the test together, and it's a rite of passage for them.

But let's not forget, this is Ryan, the Taekwondo Kid! Here he is ace-ing his test, a private test as it turned out, making it much more dramatic (and filmable - you usually can't pick them out of the herd). It has a sort of Karate Kid/Pat Morita/wax-on-wax-off vibe to it.

Breaking the board. And overcoming considerable adversity at the same time. So bow to the new red belt champion. Way to go, Ry!

And here he is getting ready to play his trombone at the school Christmas concert.