Butt Out - The Life and Death of Cigarette Advertising on Television

One of the better YouTube docs about cigarettes and the way Big Tobacco fought the truth (and won, for a very long time: "A treat instead of a treatment!").

By the way, this was produced by A & E. I used to watch Biography every day, then it trickled down to three times a week, then one, then it was on another network - then it disappeared, to be replaced by "reality" dreck. A & E no longer exists as a producer of quality documentaries.

Posted by Margaret Gunning at 12:35 PM No comments:

"Do you inhale?": Vintage cigarette advertisements

Here is another of my gif /slidehows of old ads. I've wanted to do one of cigarette ads for a while now, but once I started researching, I was inundated. There are just thousands of these things out there. I found whole sites devoted to them. They had all been neatly archived according to date and type. The fascination with these things continues, so full of jaunty lies.

Cigarettes were so normalized, so much a part of culture. They were associated with sophistication (long gloves and cigarette holder), rugged masculinity ("Come to where the flavour is!"), femininity (a bride throwing a bouquet after stubbing out her Lucky), and certain psychological benefits - lifting you up or calming you down, depending on which direction you needed to be levelled. And of course, there was smoking as social ritual, a harmless and fun form of recreation.

These ads exhort you to "be happy - go Lucky!" They depict adorable babies posing questions to their Moms and Dads about their smoking habits. Doctors exhort their patients to smoke Camels, because that's what THEY smoke. More than one ad asks "do you inhale?" Women are bursting with athletic health and glee, never getting fat because they smoke rather than eat. 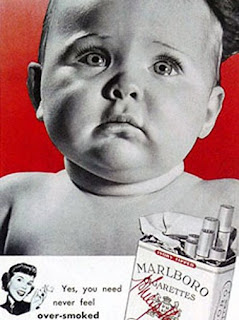 Did all this shit work? I mean, did people actually buy them because of this propaganda?

Must have. Took a long, long time for the public to catch on. Mad Men was actually about the tobacco boondoggle and its eventual defeat, though the show then had to go on to other things (like foreign cars that wouldn't start, thus defeating carbon monoxide suicide attempts).

I saw a documentary about all this - hair-raising, it was, because by the end of it, it turned out Big Tobacco was doing better than ever, shipping their lethal substance overseas to the Third World where smoking makes the horrors of life just bearable. This is where you see pictures of three-year-old kids smoking.

Let's look at a few of these things in detail. Babies abound in these things, and it's puzzling. Of course they're cute, but are the ads somehow, obliquely, telling women that it's OK to smoke while they're pregnant? They DID tell women that. Also that it was OK to smoke around them. Everyone did anyway. But I find this association especially creepy because it makes no logical sense. 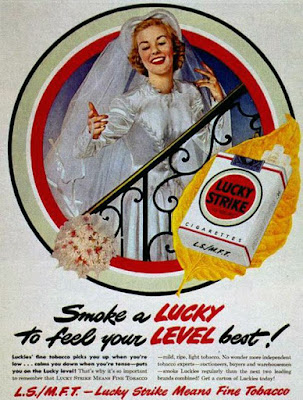 One of the more chilling Lucky Strike slogans was "Smoke a Lucky to feel your LEVEL best!" This usually depicted a widely grinning young woman - in this case getting married and throwing her bouquet.  But it's the fine print that makes my stomach drop: "Luckies' fine tobacco picks you up when you're low. . . calms you down when you're tense - puts you on the Lucky level." Level seems to be the operative term here, the desirable thing. Cigarettes are being used as a drug to regulate mood. Did it work? Look at the explosion of antidepressant use today. Maybe we should bring back the Leveller? 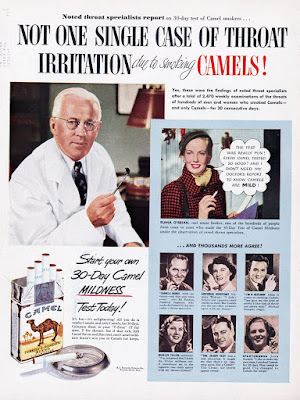 No. No! Not one. NOT ONE SINGLE CASE OF THROAT IRRITATION due to smoking CAMELS! Now I know why we're asked not to use all-caps on the internet because it makes you seem to be shouting. In this case, an official-looking man in a white coat, presumably a doctor, is displaying case studies of people who have gone and smoked their brains out for months, and STILL do not display ONE SINGLE CASE of throat irritation. "Start your own 30-Day Camel MILDNESS Test Today!" Mildness is a term you see in a lot of these ads, along with flavour. To me, sucking smoke into my lungs via my mouth and tongue just wouldn't taste very good. But I may be wrong. I can see why it might put you off food, which in these ads is considered a good thing. 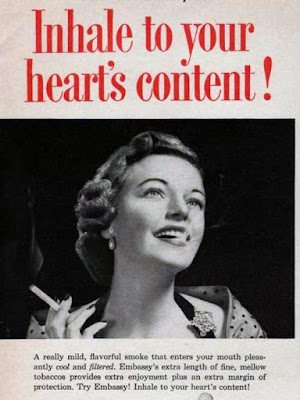 Let me just transcribe the text below the photo: "A really mild, flavorful smoke that enters your mouth pleasantly cool and filtered. Embassy's extra length of fine, mellow tobaccos provides extra enjoyment plus an extra margin of protection. Try Embassy! Inhale to your heart's content!"

This is completely chilling in light of what we now know about the value of filters in protecting people from cancer. They did absolutely doodlysquat, but for decades the public was told over and over again that they filtered out "tar" and other unwanted things. This was an obvious attempt to assuage public anxiety about all those silly things the Surgeon General had been telling them, that their lungs would rot and they would end their days coughing up blood in a cancer ward. 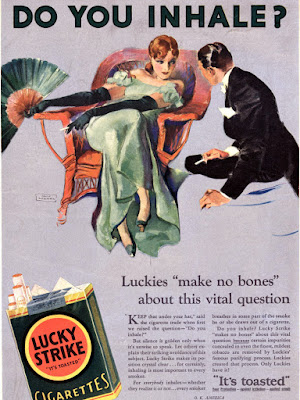 This is another aspect of the cigarette ad: gorgeousness. Some of these are just so beautiful to look at! How could anything so sophisticated and artful be bad for you? But soft! What lie through yonder advertisement breaks? Could it be - more reassuring text?

DO YOU INHALE? Luckies "makes no bones" about this vital question. "Keep that under your hat," said the cigarette trade when first we raised the question - "Do you inhale?"

But silence is golden only when it's unwise to speak. Let others explain their striking avoidance of this subject. Lucky Strike makes its position crystal clear. . . for certainly, inhaling is most important to every smoker.

For everybody inhales - whether they realize it or not. . . every smoker breathes in some part of the smoke he or she draws out of a cigarette.

Do you inhale? Lucky Strike "makes no bones" about this vital question, because certain impurities concealed in even the finest, mildest tobacco are removed by Luckies' famous purifying process. Luckies created that process. Only Luckies have it!  "It's toasted"

"Toasted" seems to imply that the tobacco has somehow been purified of carcinogens (a word that might not even have been coined back then). Someone in the tobacco industry waved a magic wand over it, rendering it harmless. Surely the good folks at Lucky Strike, the LSMFT people ("Lucky Strike Means Fine Tobacco") would know best, and would never do anything to harm the public. But those ads seem to bespeak certain nameless jitters among the general population, not to mention the tobacco industry itself.

Was it the fact that 90% of heavy smokers were pulling a Humphrey Bogart or an Edward R. Murrow in their final days and gasping their last in the cancer ward? Did no one put the pieces together? But if they tried to, Lucky reassured them: pish-tosh! WE don't mind discussing the matter even though everyone else is being needlessly coy about it. WE are honest about the fact that smokers inhale. But our product is so magically-produced, with shamans sitting out in the tobacco fields moaning incantations over it day and night, that those delicate throat membranes surely won't start to ulcerate, bleed, fester, bubble, blister and turn black.

A FRANK DISCUSSION AT LAST

on a subject that has long been "taboo"

"Let sleeping dogs lie!" So said the cigarette trade when first we raised the subject of inhaling. But dodging an important issue is not Lucky Strike's policy!

Do you inhale? That question is vitally important. . . for every smoker inhales - knowingly or unknowingly. Every smoker breathes in some part of the smoke he or she draws out of a cigarette! And the delicate membranes of your throat demand that your smoke be pure, clean - free of certain impurities!

No wonder Lucky Strike dares to raise this vital question! For Luckies bring you the protection you want - because Luckies' famous purifying process removes certain impurities concealed in every tobacco leaf. Luckies created that process. Only Luckies have it!

So, whether you inhale knowingly or unknowingly, safeguard those delicate membranes!

Bambi and Thumper are REAL!