Why did Tesla fail?


Posted by Margaret Gunning at 3:28 PM No comments:

Email ThisBlogThis!Share to TwitterShare to FacebookShare to Pinterest
Labels: Tesla, why did Tesla fail?

Election hell: we need another miracle


I didn't particularly feel like writing this today. It's a horrible grey day out there, merciless. We just had Halloween, and it freaked out my cat so badly that he's still anxious, with huge eyes. Now it's plain rotten out.

I hate it when something partially comes to me. Yesterday I couldn't remember the name Joyce Carol Oates. I kept thinking of the name Cornelia. I was thinking of another author, Cordelia Strube. . . Another name was Robert Fulford, the Canadian literary critic, and all I could come up with was "Bob".

My mind plays these games with me, chasing itself. Like charades, it will give me one syllable, then two. . . then take them away again. I am reminded of my favorite scene in one of my most beloved movies, Young Frankenstein: "SED-A-GIVE??"

But this isn't a can't-remember thing so much as a CAN-remember-and-can't-find-it. This is rare on the internet. As with Alice's Restaurant, you can get anything you want. At first I thought it was a song by a Canadian group, which would partially explain it.

One of the other songs I couldn't track down was called Africa and was by a Canadian group called Thundermug. Until I found the name Thundermug, I couldn't find it anywhere on YouTube.


This played incessantly all during one summer when I had just left home, so it evokes both excitement and utter terror. Now I realize it must only have been "Canadian-famous" (like Robert Fulford, who may not even be alive any more). It's a unique sound, with all those kazoos and bird calls. For years, I thought the lyrics were, "South Africa, ah-AH-ah." Doing a bit of digging, it turns out to be "LOVE Africa, ah-AH-ah."

Love Africa (ah-ah-ah)
Beautiful land (ah-ah-ah)
Hot is the sun, cold is the night
You're mine!

Thunder saw savanna
I can look out to the sea, look at me

Up the great Zambezi
Sail the Congo to the sea

These are the only lyrics I can find, and I think there are several mondegreens in them, but it's hard for me to correct them. "Sing coloured man" sounds pretty racist to me, even though it came out in the early '70s. I always thought it was "sin-coloured land", which is more poetic, even if it doesn't make much sense.

That's all. No verses. No name of group. But I can hear that spirited chorus singing in four-part harmony, hands clapping, organ playing. I want to find this! I want to hear it again. At first I thought it might have been recorded by a Canadian group, The Bells, who had a few mainstream hits before fizzling out like most '70s groups did. But when I traced it down, it was a different Don't You Think It's Time. There are a lot of songs with similar titles, and none of them are "it".

If I could get the name of the group. . . Until I somehow found the highly questionable name Thundermug, I could find nothing of Africa, because I kept calling it South Africa (which is exactly what it sounds like - a serious mondegreen). So if I could get a little more of it -

I've tried all the million-and-one lyric sites. Nothing. I've beaten the YouTube bushes, which always seem to yield something up sooner or later, even some pathetic cover with a drunk guy on an out-of-tune guitar.

Yet I hear it, rollicking, spirited - I want to hear it, and guess why?

I think it's time.

I think it's time we.

I think it's time we had.

I think it's time we had another.

I think it's time we had another MIRACLE so we could get through the swamp of horror that is the American Presidential election. My stomach queases, I feel not only downcast but doomed. It just doesn't seem to want to go any way that could be good.

I've had a lot of thoughts. Trump is a cancer on the body politic, no doubt, but what about Hillary Clinton? I think she's tough, astute, and has the capacity to lead the free world. She's more than capable. The email scandal is nothing but blowing smoke. It's a non-story.

But like Nixon in the infamous Kennedy-Nixon debate, Clinton has no camera presence.

This isn't something she can help or change. And I did not fully realize it until I saw Michelle Obama's recent speech - the one that took my breath away.

You know what I mean. Unless you're Republicans, in which case, you may kindly take a hike.

Michelle Obama glows with charisma. Her speaking voice is warm and expressive. She is full of passion. Hillary Clinton's voice - and again, this is not something she can help or change - is rough and monotone. It just has no emotion in it, is almost croaking. She isn't always grim, and some of her facial expressions are quite delightful - but TV is merciless, and insists on a certain kind of vibe, and she doesn't got it.

Doesn't got it, my friends.

What does Dump-truck have? Nothing, as far as I am concerned. He's just a rich asshole who tapped into something, a seething unrest in a large group of people who felt powerless and saw him as the way out.

I won't say who this reminds me of. I don't have to.

So all this leads back to a rollicking gospel number that I cannot find anywhere. It's as if it never existed. That never happens on the internet. It's all there, always. Even Thundermug was there, for God's sake! I didn't hear this song in church, by the way. No. I heard it on the radio. Over and over and over again. And I want to hear it now, so badly! So, so, so badly:

I just realized that throughout my adult life, I kept trying to forget about "Sonovox", the miraculous sound phenomenon of the 1940s. Until just now, I didn't know exactly how it was done, maybe because I didn't want to think about it at all.

But now I just found out.

Here is what it said on a music site dedicated to sound aberrations: "You could make just about any musical instrument 'talk' with Sonovox.  The sound of the instrument was fed into two small speakers placed on the sides of the throat. Those sounds were transmitted to the larynx, so that they came out of the throat almost as if they were produced there." Thus if you shoved speakers blasting the sound of a clarinet against your larynx and mouthed the words "scoobie doo", you'd have a "scoobie-doo-saying" clarinet. The miracle of the ages.

I don't know why this didn't seem to bother people then, but the Sonovox produced the most ungodly spectral whining sound.  Really, it's impossible to describe, except to say that it is not quite like anything else you've heard, or would want to hear again. The only thing it remotely resembles is the robotic vocal effect of autotune. Most of the instruments don't sound like themselves at all. They just sound weird. 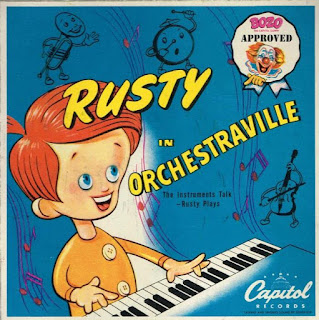 I've been here before, I know I have. I've suffered from Rusty poisoning. This was the recording I was required to listen to ad nauseam as a child, so that I could be indoctrinated into the Joys of Classical Music. I listened to it again recently (for old recordings never die - they just keep getting reissued), and it was, if anything, worse than I remembered. This recording was probably the first widely-known use of the Sonovox, and it became a sensation. Or at least, it wouldn't go away. The different instruments whined and gulped and sounded like bees trapped in a bottle. Most of what they said to Rusty was unintelligible, in spite of the slow robotic way they said it.

I don't know why the people who invented this didn't realize, or perhaps care, that their invention was incredibly creepy and that they would be scaring little children and making it impossible for them to sleep. (Or was it that Civil Defense "this is only a test" thing on TV?)

But to find out that others had used or abused Sonovox - or their listeners - was quite a revelation to me, a painful one, because then I sort of had to listen to some of it. It gave me flashbacks.

This must have been some kind of fad. People must have gee-whizzed over it. There is a talking guitar on YouTube that is so bad, I won't subject you to it here (except for the silent gif above), but people loved it back then. They loved it so much that they completely dropped it a few years later. Disney used Sonovox as the voice of Casey Junior, the circus train in Dumbo, but he only says "all aboard" in a not-too-obnoxious way.

All the same, trains aren't supposed to talk.