To find the really creepy logos, you've got to go off-road. These aren't film companies that anyone has ever heard of (Hikon??). And perhaps it's just as well. Though their logos are cheesy and look sort of low-budget, they have a very high freak-out factor.

I couldn't believe this WAS Orson Welles, thought it was maybe a Welles impersonator, but yes, that's him. I don't know anything about a Rainbow Release. His career did sort of slide downhill at the end. Note how the zoom-in stops at a certain point. That's kind of like MY zoom-ins, where the camera suddenly goes "bzzzzzzzzt".

This whole thing is so weird! Who's that guy, that face that appears in the militant-looking ABC logo, the one with the eagle catching a lightning-bolt in its beak? This looks like the emblem for a white supremacist group. The Super Circus thing is just bizarre. It has a fall of Rome flavour to it. Pre-Howdy Doody, I think.

Again. "An Apple Film". Not sure about this one at all. Reminds me, for some reason, of Dodo, the Kid from Outer Space - maybe the very basic animation.

Red blobs in space? Yes, it's exactly the same.

There's a whole sub-genre of logos from Indian movies. These are quite spectacular, but in most of them nothing moves very much. It's a sort of tableau, with alarming or even freaky-sounding music and sound effects. This one actually has a form of animation in it, though it's strange. A white blob turns into a woman. By the way, if you ever watch any of those "scary logo" compilations with the sound off (late at night, when you really should be in bed), they are suddenly a whole lot less scary. Sound is about 60%.

This one  shows up in EVERY scary logo compilation, and do you know what? IT ISN'T A LOGO. At all. It's just a shot at the start of a very old Wizard of Oz  movie from 1914. I don't know how they can call it a logo, but it is very strange. So I'll include it. And I've run out of them anyway.

Posted by Margaret Gunning at 5:29 PM No comments:

Presidential Debate: it would've been better if she wasn't there 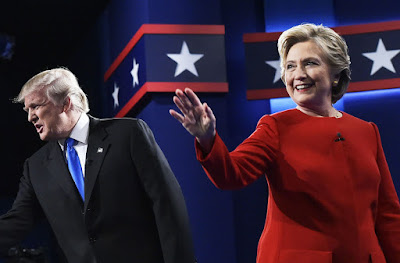 HEMPSTEAD, N.Y. (The Borowitz Report)—Plunging the future of the 2016 Presidential debates into doubt, Donald J. Trump said on Tuesday morning that he would not participate in the remaining two debates if Hillary Clinton is there.

Trump blasted the format of Monday night’s debate by claiming that the presence of Clinton was “specifically designed” to distract him from delivering his message to the American people.

“Every time I said something, she would say something back,” he said. “It was rigged.”

He also lambasted the “underhanded tactics” his opponent used during the debate. “She kept on bringing up things I said or did,” he added. “She is a very nasty person.”

Turning to CNN, Trump criticized the network’s use of a split screen showing both him and Clinton throughout the telecast. “It should have been just me,” he said. “That way people could have seen how really good my temperament is.”

The billionaire said that debate organizers had not yet responded to his ultimatum, but he warned that if he does not get assurances in writing that future debates will be “un-rigged, Hillary-wise,” he will not participate.

“I have said time and time again that I would only do these debates if I am treated fairly,” he added. “The only way I can be guaranteed of being treated fairly is if Hillary Clinton is not there.”

(Though this piece was lightly borrowed from The Borowitz Report, a column in The New Yorker which an alarming number of people take seriously and launch lawsuits against - and Trump may soon be one of them - I agree with its sentiments absolutely. Trump made a kind of sense when he initially stuck to what he was artificially programmed to say, then went "off-road" and sunk himself as usual. It was a great day for America.)