The reason people think they are [only] heads is there are about 150 statues buried up to the shoulders on the slope of a volcano, and these are the most famous, most beautiful and most photographed of all the Easter Island statues.


This is just one of those moments of serendipity that makes me want to do the Dippity-Doo.

I was trying to get through the usual abominable trash on The Vintage News (which for some reason keeps dragging me back, though it's about as well-researched and scholarly as Ripley's Believe it or Not) when I came across the beginning of an article on the famed Easter Island statues that was so horribly written, I burst out laughing. I just had to cut and paste the beginning of it, but then, when I went to look for an illustration. . .

It was just too perfect: a giant head that somehow completely lacked a brain.

Fair game: those old family photos on the internet 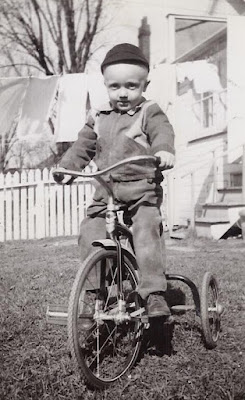 Blogging is an organic process, like all serious writing. (Serious! As 3/4 of this blog is satire, how can I say that? But satire is perhaps the most serious writing of all). This piece is beginning to evolve from some thoughts I've been having for quite a while now.

In spite of my general disdain for Facebook, there are a few pages that I "visit" regularly (in other words, I look at them, and read them if there's anything to read). One of them is called The Kitsch Bitsch. True to its name, the page posts tacky items, photos and videos and gifs, many of them from the '50s, '60s and '70s. There are certain themes or subjects that come up so often, it almost gets tedious. A few times a week there is a vintage recipe for a jello mold containing all sorts of disgusting "entombed" ingredients such as organ meats and canned fish. Old ads for men's fashions run incessantly, and include long crocheted vests that look like macrame, crimplene jumpsuits, mint-green polyester leisure suits, and bellbottoms that remind me of the fins on a '57 Chevy. 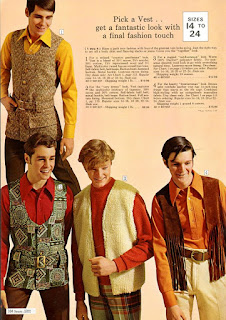 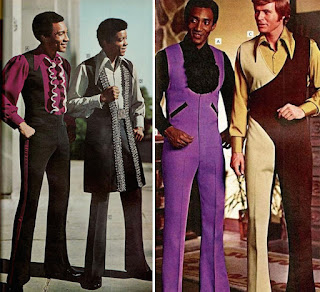 You see this all over the place. There are posts at Christmas that show "really lame Christmas photos". High school yearbook photos are a favorite. The common theme is goofiness, awkwardness, ugliness, or the bizarre. Until very recently I was all in, eager to comment on how completely lame these things were.

Then I began to think (never a good idea, but I did): hmmmmm. Where do these things come from? 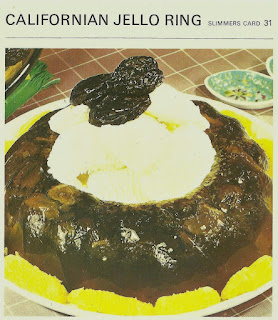 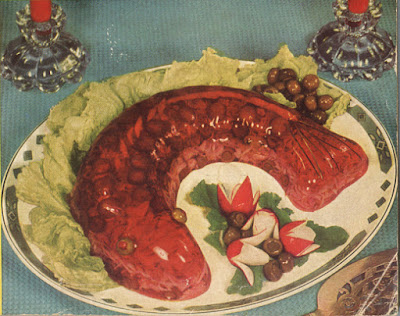 As with Pinterest, we usually don't know where pictures posted on the internet/social media come from. They just sort of . . . appear. When they do, they're apparently in the public domain and can be passed around freely, and ridiculed even more freely. Some of the comments are quite nasty: swipes, jeers, and groans. Everyone feels entitled to do this - it's a free-for-all, with no holds barred.

But lately, I have started to think: what if someone I knew, someone who used to be a close friend and had a big trove of my personal family photos, had a falling-out with me and decided to get a little revenge? What would it be like to see all my old pictures out there, including the crazy, bizarre ones, duplicated and shared again and again and again, with an ever-longer list of nasty comments appended? 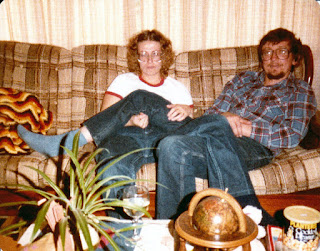 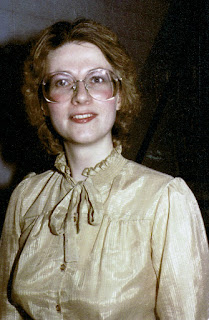 I've never heard anyone say anything about this. These aren't real people! Are they? Are you kidding? Who thinks about that? They're just goofy old photos on the internet, and who knows/cares where they came from. This means they can show
drunk people, out-of-control people, people weeping or hitting each other, people with disabilities - heywaitaminute.

Of course we have the thick glasses (and I have tons of those photos - mine were true Coke bottle-bottoms before the plastic variety came along). Thick glasses are ridiculous and stupid and something to be publicly jeered at. Never mind if the person is legally blind or has cataracts or is - OK, should I stop now? Have I suddenly lost my sense of humour?

But I've seen some of those "cheesy" photos - and I think the feeling is "oh, we all have those cheesy family photos so it's OK" - in which it's pretty obvious to me that a child has Down syndrome or some other disability that may be barely visible. It makes the person look "different", thus "goofy" and fair game. 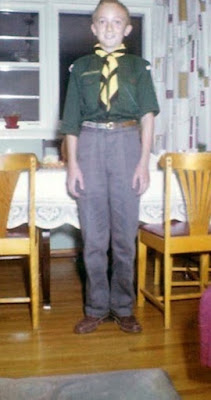 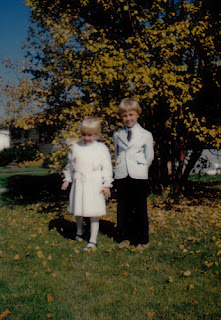 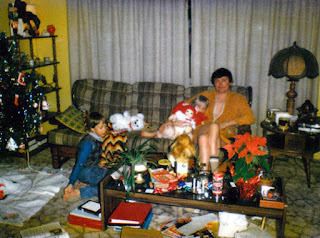 If I suddenly found my family trove on the internet, on Pinterest or Facebook or wherever, I'd probably feel like I had been punched in the stomach. We can't control these things because once a photo is in someone else's hands, it can be "out there" in a nanosecond. WE aren't necessarily in on the joke.

I had another thought - oh God, let me PLEASE stop thinking. What if the image that popped up on Instagram or somewhere else was your deceased Grandma, or your father, or your brother who had been killed in an accident? What if the grief was very fresh - or not so fresh, but still taking up residence in your heart?

We make assumptions on the internet, and one is that goofy-looking things/people can be mocked with impunity.  If these were real people, surely they're all dead by now. Or they don't mind it, it's just as funny to them (no matter how savagely nasty the comments are, including calling a mentally challenged person a "retard"). 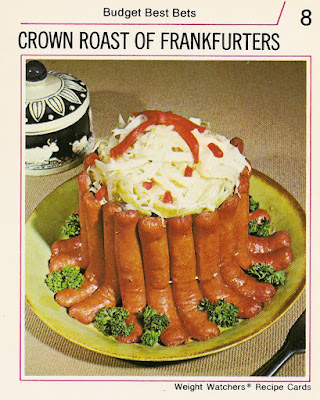 I don't know about other people because I'm not "other people". But there was a time in my life when, if I had suddenly seen a photo of my father's face  jumping out at me from nowhere, I would have retreated in horror and spent the rest of the day weeping. It took five years of therapy for me to come to terms with the fact that he sexually abused me when I was a child. As a matter of fact, his photo IS on the internet in various places, and (to my horror) I was ambushed by it not long ago.

How did it get there? I don't know. That's another thing. If you are having difficulties with your family and there is a schism, people on the other side of it might start posting pictures -  post them "at" you, I mean, as a form of deliberate violation or revenge. Those pictures can get around like a (real) virus: just hit "share". You're automatically the target for whatever people want to publicly say about you.

At this point, the conversation takes a right turn and people begin to say, "Oh, don't be so sensitive. It's only a picture, It doesn't matter what people think. Just ignore them." So if someone finds and posts a picture of your falling-down-drunk father and the image makes your stomach drop through the floor, it's OK.  Especially the contemptuous hilarity that ensues in the comments section. 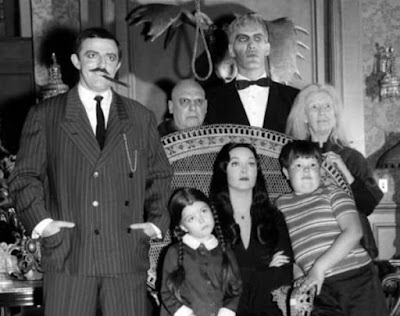 A photo means almost nothing now, we take dozens or scores of them a day, but forty or fifty years ago it was an occasion. Families usually posed for them, but the candid shots could be most revealing of what was really going on. People had to develop film then (remember?), and out of a roll of 24 shots, 3 or 4 might be "keepers". But people often kept the rest anyway, afflicted with that ridiculous post-war habit of "waste not, want not".

So how did those outtakes end up on the internet? I don't know, but it's hard for me to believe that the descendents of drunken Aunt Martha gleefully put them out there. Family albums even end up in estate sales when somebody dies. Deaths are messy, detritus abounds, and things like that just get lost in the shuffle.

Is there any way to stop this? Why should we want to stop something that's this much fun? The truth is, it's a blood sport now and part of internet culture. But I wonder if we shouldn't stop, once in a while, and think about those dead people, or perhaps the ones who are still alive and suffering through all those comments.

ADDENDUM. One of, perhaps, many. Or not. Aside from kitsch photos, I used only my own family pictures for this. Because I don't keep weird-looking ones, as a rule, most of them aren't very weird. But all of them have meaning.

Old photos are saturated with meaning. As saturated as the godawful old 1970s Kodachrome colour process in those prints. In gathering up a few images for this thing, I did seriously think of including one of my father, which ambushed me from a Chatham-Kent Facebook page a while ago. In it, he stares into the camera with a shark's dead eyes. 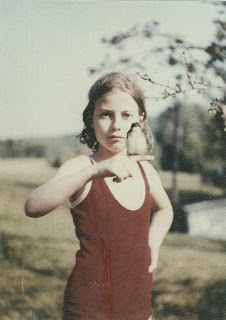 For reasons I can't comprehend, I kept the two photos I found. I just did. I was going to paste them up here, but when I went to open the file, it was like the Wicked Witch of the West trying to get Dorothy's slippers off. A big lightning-bolt shot out at me and I jerked back as if I had been electrocuted.

Not that those pictures mean anything. Why such a big deal?

Posted by Margaret Gunning at 12:02 AM No comments: