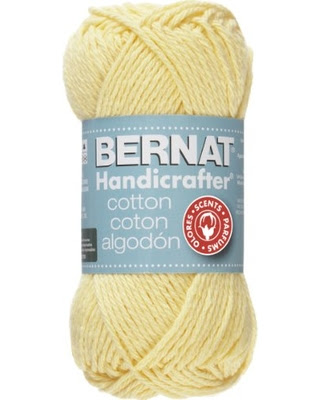 So this is the subject of this post, but this bland yellow cotton skein of yarn doesn't begin to convey what the problem is.

I recently went into Michaels during a yarn sale and began to grab handfuls of this stuff, all different colours, because it was on for $1.50. Small as they were, that's still a good price.

Bought them. Then they were crammed into a plastic bag and sat there for a week. Then last night, when I opened the bag -

It was a "what the - ?" moment. There was this - stink. It seemed to be clinging to the bag, permeating it. I thought of those horrible scent cards in magazines, the kind that make my eyes immediately start burning. 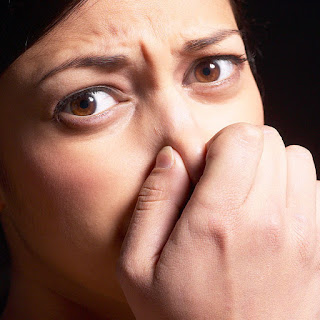 Only this was far worse. It was Cat House No. 5, a French perfume you'd buy at the dollar store by the gallon, something you'd use to disinfect the cat box if you really hated your cat.

At first I didn't know what the hell was going on. I began to paw through the balls of yarn. The smell was getting stronger and stronger, until I found the yellow, and -

I came pretty close to gagging. I noticed that on the label, there was a tiny little symbol that said "scents", printed on a nearly-illegible red circle. It would not be obvious to a consumer at all, and if you were in a hurry like I was, you'd just grab it as if it were any other skein of yarn. I'm sorry, but it doesn't occur to me to pick up and smell the yarn before I buy it. It's like checking it for fleas - just does not make sense. 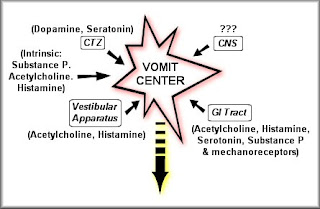 Even as I write this, a phantom headache threatens. I can't describe it. The smell has taken up residence in the lining of my nostrils, as only very acrid and overwhelming scents do.  It's Aunt Dorothy's cheap perfume, applied layer by layer because she didn't bathe very much. It's that headspinningly stinky Febreze furniture deodorizer shoved up your nose with a shovel. It's one of those reeking pieces of cardboard you hang up in the car to hide the smell of Junior's last heave. It's  -

One day on the bus, I sat next to a very Goth-looking woman who obviously worked in a meth lab. The chemicals coming off her literally burned their way into my sinuses, which had to heal over the next few days. This isn't quite that bad, but why can't I get rid of the smell?  I haven't touched the yarn in hours! The rest of it, the stuff that was in the bag along with the "scents", have caught the contagion and now reek almost as badly. They just absorbed it like a sponge. I threw them all in the clothes drier and they've been in there for an hour, but -

I don't think so. 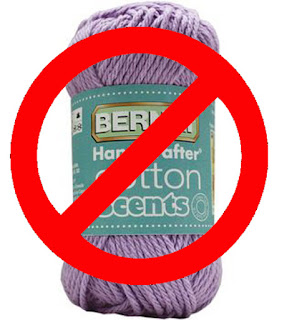 I may well have to return the whole lot. But the problem is, Michaels is obviously cramming this "scents" yarn in the same bins as the regular stuff. By now, it'll all be pretty much permeated.

Scented yarn. OK.  I'll try to wrap my head around the concept! If you, say, knitted a sweater or even a scarf with this stuff, your body heat would fully release its gagging, wafting ponk. It would follow you around all day and set off everybody's allergies, not just your own. You would move in a cloud of stink that blares "cheap! Cheap! Cheap!" all day long. And I doubt if something this obnoxious could be washed out.

Maybe it's like pizza crust, constantly being reinvented: stuff it, put hot dogs in it, chop it up into rippable bits, dunk it in some sort of sauce that probably won't improve the experience. But for God's sake, don't just leave it alone! Keep "improving" the product with bizarre innovations that fall down in the execution. 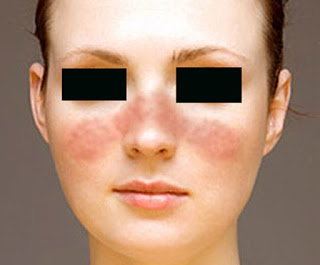 This yarn is booby-trapped. I'm not the only one who has bought it without realizing just how evil it is. Maybe they should put steel bolts into the skeins that shoot through your hands, nailing you to your chair as if you're Christ on the cross.

I know I am within my rights to return all the yarn, but what new stink might I find in the bins? There are three or four of these "scents", including - gag - lavender. The one I mistakenly bought is supposed to be some sort of migraine-inspiring vanilla, but if you added a little Chanel No. 5 to skunk spray, you'd just about have it.

I find it gratifying, having dug up the few reviews of this product that exist on the internet, the degree to which other customers are on the same page with me. I feel vindicated and a little less shitty about the whole thing. I hereby quote a few of them anonymously: 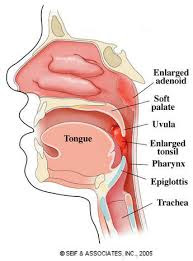 I just bought this yarn not knowing it was scented. I like the colour but the scent was giving me a headache! My fingers even smelt after. I had to wash my hands when I was done knitting. I really hope the smell comes out in the wash. I will not be purchasing anymore scented yarn. Frankly, I don't understand the purpose of adding perfume to yarn.

I do not recommend this product.
smelly

Bought this in creme white not realizing it was scented cotton. It is cheap, not a nice scent and I put it in the trash.

I do not recommend this product.
Nice color, not so nice scent.

Purple is my favorite color and one of the reasons I purchased this item. I like the soft lavender color but I do not like the scent.

To me the scent smells like cheap soap. Luckily it's not too overwhelming (although it is strong), so it's bearable even though I don't care for the scent. 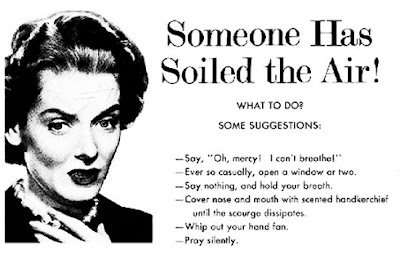 I ordered 3 different yarns and they all smell exactly the same and nothing like the description for any of them. The scent is AWFUL. I don't even know how to describe it; it's just an annoying smell that is really strong and almost burns your nose and throat. I would not purchase this again, and unfortunately I have to finish my project so I don't have time to return it. I am just working a little at a time and taking breaks from the horrible smell.

Would recommend to a friend? No

Could not get by the smell. There is no words for it. Just no good. I thought that there would be much more little bundle of yarn. Just no good. Brought it back to the store. Waste of time and money

The skeins were a whole lot smaller than what I had purchased prior from another source. I thought they would be all the same size.

One person found this helpful 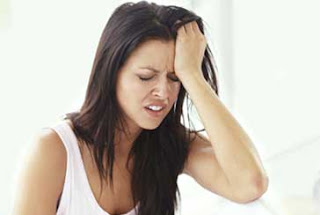 I bought it for the color & it is a good cotton yarn. The scent is not unpleasant, but it's not exactly vanilla - it is more reminiscent of a laundry detergent scent.

One person found this helpful

Well, I feel like a fool for ordering this. It is a teeny, tiny skein. I kept looking in the shipping box for the rest of it. And it does not smell like lavender. at all. It rather...stinks. There goes $9 wasted. I expected more from Bernat. A teeny, tiny smelly bundle. lol. Not my usual joy in opening a package of new yarn !

Smelled harsh and chemical-y. Had to return.

It's ok, very skimpy .not much of a scent wouldn't buy this again....

NEXT DAY'S REFLECTIONS. Second verse, same as the first! I found yet another review that resonated with me. And how.

This yarn does not smell like vanilla. It is VERY perfumey. Bought it for a child hat but it smells like grandma's perfume gone bad. Additionally some of my skeins were stained with what appears to be coffee.

No, I do not recommend this product.

Posted by Margaret Gunning at 1:05 AM No comments: 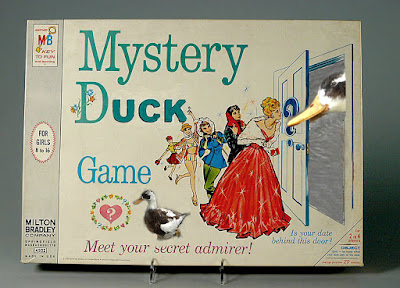