SOLVED: the Mystery of the Como Lake Duck!

I've written about this guy before. He's an inhabitant of Como Lake in Coquitlam, B. C., a place we walk around a few times a week.

The lake is filled with mallards, various diving birds (even loons), and, sometimes, great congregations of Canada geese, but this particular duck is totally unique. To be honest, he doesn't even look like a wild duck. I've tried to find out more about him, but since I didn't have a name, only a description, I kept running up against a blank wall.

Over the several years we've seen him, I became more and more curious about this strange rogue duck, and then downright perplexed. Eventually, every time we spotted him I began to go nuts. Something was going on here! He was so big that he seemed like a domestic duck that had gone native. He was piebald in his markings, like a cowboy's pinto horse, and had that long, thick, curvy Donald Duck bill that you see in the barnyard.

A couple of years ago I found a magnificent site for the Cornell Laboratory of Ornithology. This is one of the best sites I've ever seen for sheer volume of content combined with ease of use. If you want to find anything bird, it's here.  It's truly user-friendly, with lots of descriptions and thumbnails of species so you can put name to bird, not to mention recorded calls and songs for every type of bird. This site helped me figure out what those eerie "whoo-whoot-whoo-WHOOOOO!" sounds were that I was hearing on summer nights (barred owl). The call is described on the web site as "who cooks for you?", which delighted me. The "youuuuuu" sounds exactly like a descending trill on a bassoon.


Finally it occurred to me that if anyone in the world could identify my mystery duck, it would be the Cornell Laboratory. I emailed them, attempting to attach a link to the video of it  (which may or may not have worked) and describing it as well as I could.

Some time went by, but not much. Then today I got this email, which delighted me no end!

It is definitely a domestic-type — closest I can find is something called a Magpie Duck. It is a hybrid of Mallard origin.

Now that I had something to google, everything matched up and I realized that it had to be a magpie duck. Apparently, these birds make good eating and are cultivated for their meat, a fact that had better not get around Como Lake. It's surrounded by avid fisher-persons who might just be up for a duck dinner. This guy is so friendly and hangs around the shore so much that he'd be an easy catch. 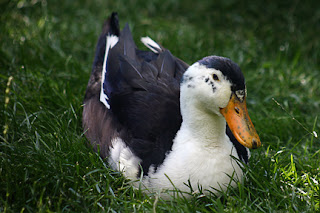 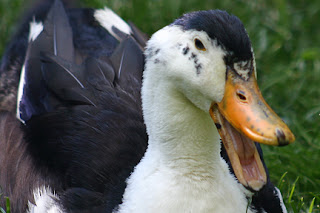 (Not our duck. Presented for comparison only.)

A couple of times we thought we saw a smaller duck of this type. A female? It's possible, though we didn't pay enough attention. I'm not sure why it's called a magpie, but that's his name, and he apparently has mallard blood, perhaps the way I have Spanish blood from the Spanish Armada. (Not. We were all dirt-poor Irish.) Some of the photos I've found show ducks with iridescent mallard-like patches on their heads.

Meantime, though this song isn't really about my duck, it's very lovely and I want to include it here.

And one more barred owl video.


POST-SCRIPT: Since writing this admittedly-sparse piece, I've had some thoughts. Thoughts of the ugly duckling, of changelings, of barnyard ducks escaping certain death and flapping away from the hatchet. Of strange-looking magpie ducks who barely escaped being dinner.

This is why I like this duck so much, and why it drove me so crazy before I knew what it was. Though it plainly didn't fit in its environment and looked sort of like a turkey among doves (albeit a nice-looking, handsome turkey), it seemed so comfortable, so glad to be where it was. Its fellow ducks, mostly mallards, didn't seem to notice that it was different, but then - they're used to honkin' hundreds of Canada geese, not always the most hospitable creatures, suddenly descending on the lake and taking it over, doing weird things like swimming in big circles. One friendly-looking duck, one big farmyard-looking duck was not going to be a problem, and they all dunk and dabble the same way, ducktails up. Plenty of gunk and ill-advised tourist-food to go around. 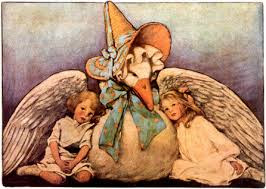 But at the same time. . . I'm depressed today, not quite psych-ward depressed but down, and I wonder if it's because the air has been let out of a longstanding mystery. This weird, doesn't-fit-at-all duck suddenly has a sort of identity. He at least makes sense now. And I don't know whether I like that. I don't know whether I'll be so prone to saying, "Oh, look, there he is!" when he glides or waddles into view. Or maybe I will, but it won't be the same.

It's as if he's been operating under an alias, or has been The Duck That Has No Name, and is now "named", or at least species-ed as a magpie duck. Odd name, that - one would think it would be harlequin or something, with those mixed markings. The only association I have with magpies is Heckle and Jeckle.

I've done a bit of digging into the breed, not a lot mind you because that would bore me, and I can't find reference to it being any kind of hybrid. The YouTube videos I've found feature pet magpie ducks, not obviously being fattened up for the kill.

The magpie duck is maybe 50% larger than the mallards, heavier-bodied, with that cobby build and waddly proportion that aren't common in wild birds. Yes, the mallards have large breasts, but they're mainly floats, a way to keep themselves upright in the water and protected from cold. This guy is just solid, man, carved out of alabaster, or plain wood like a decoy bobbing around in the water. There probably would be some pretty good eating there, with some orange sauce on the side.

Ducks, swans, all that stuff, it's the material of fairy tales and legend. I have a mystical attachment to birds, which is why I went into such deep mourning at the very premature death of my beloved Paco. I hardly had any time with her at all before we found her dead in her cage, for no reason anyone ever understood.

The fact my back yard birds have fled is a mystery, and also pains me. Last year the yard was teeming with species, including loud, arrogant, impossibly gorgeous Steller's jays who would swoop in and empty out the feeder. We also saw juncos, chickadees, wrens, thrushes, towhees, sparrows, and - every once in a while - the magnificent visitation of a flicker burning bright.

Now, they've all gone. Where? and why? Is it because we have a cat now? Because we never expected to have a cat. Bentley is a hunting voyeur only, and is not allowed to go outside and become catmeat. But he does spend considerable time peering out the back window. 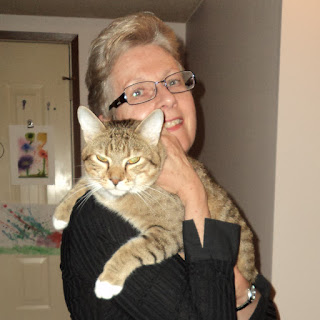 And yet, last summer, the first summer we had him, the birds still teemed.

When I go to Piper Spit on Burnaby Lake, blackbirds literally flutter down out of the sky and eat out of my hand. I feel like freaking St. Francis of Assisi. They turn their heads this way and that, their eyes like obsidian beads, their feet freaky black leather twigs. What are they thinking?

Birds do seem to think with a single mind, like the Borg. They exist as collectives. Like humans, they're flock animals, only far more clever than we are. Certainly, they are better survivors. When it all collapses, when the day of reckoning comes, will some of the birds make it? Hitchcock portrayed them as freakish and merciless, and yes, there is that aspect to them. The fat pigeon that took over my hand at Piper Spit weighed about twenty pounds, and I realized as I looked at it that, close up, it was as hideous as the dinosaur from which it evolved.

POST-POST. I felt bad about this, about mentioning Bentley as one of the reasons the birds fled from the back yard. Because it might not be that, at all. We've noticed how dramatically bird populations wax and wane, even week-to-week. Those first couple of visits to Piper Spit were so bird-heavy that I assumed it was always like that, a teeming bird paradise. Then, one week we went and there were only sullen-looking heaps of geese (geese not being my favorites - they have a habit of hissing at you, before they lower their heads and charge). No more magnificent sandhill cranes or iridescent swallows or gorgeously-plumed wood ducks or or or - . But next time we went, about 2/3 of them were back. I don't know what drives them, I don't.

But it's not Bentley! Bentley is like a second child born after tragedy, especially beloved. He is just the best cat ever. 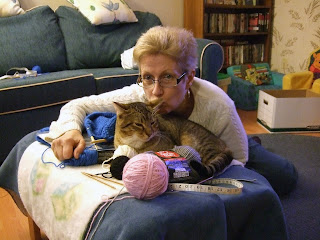 Posted by Margaret Gunning at 4:11 PM No comments:

The tiny movies of the heart

Tiny movies.
Captured movements from the day
the horses        day smells
sounds nothing like the now
with its jacking hammers and scream of traffic
why are we so stressed and despairing?
I won't ask myself, or them.

A shiny horse
moves into view, a horse
almost supernatural
in its beauty
in its stillness
in its oblivion
in its centrality to their existence
not just a car but a beloved beast
cared for
not by oil changes
but a curry comb
and gentle words
I can hear it whuffing and whickering
and responding
and smell its superb
glossy hide
it is animate
and capable of relationship
it is not just a dull means
of transportation

People file and hustle and hurry
off a train or boat
all their faces are different
as faces are always different
but faces were different then
each person's demeanor their own
anxious faces
bored faces
tired faces
one woman is skipping
a man adjusts his hat
(or does he tip it to the camera?)
most are businesslike
but give the appearance
of going home

A smooth skim along a beach, carriages sailing across the view
as the camera tracks, perhaps on wheels
some people vaguely aware that someone is cranking a thing at them
do they know what it is?
Those moving pictures.
Imagine me in a moving picture!
and all those horses just standing, standing patiently
it must be very hard to stand so patiently
waiting for what?
Are these cabs for the rich?
A man twirls his umbrella as he walks with his woman
everybody's making love or else
expecting rain

Think how long all these people are dead.
Think of their descendents.
Think of them begetting them
and birthing them.
It's crazy and frightening
to think of this moment
of sand and smells
gulls
and sea creatures dead for more than a century
but their descendents still gasping for their existence
in a sea now foul and choked
that heavenly vista
likely gone for good