Prawn killer! Thumb splitter! Must be the mantis shrimp 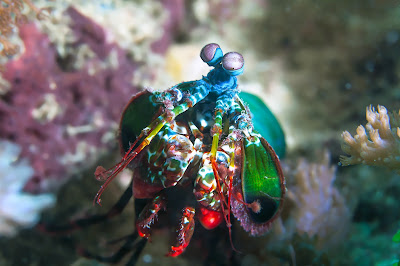 This is the picture that started it all. I think. God knows what I was actually looking for. Oh, I know. I was helping my granddaughter with an assignment. She said, "Nanny." "Yes." "I have to do the ocean." I wasn't sure what she meant. I had just printed out internet images of just about every animal that ever existed. But now I found out we had to "do the ocean".

So this led to me downloading a quite ordinary image of a shrimp: 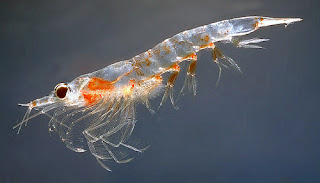 God only knows how that led me on to THIS:

Like tardigrades, it's almost impossible to believe these things exist. Like tardigrades, they have some sort of supernatural strength. And they're icky. Plain icky. They're not pretty at all, no matter what that first picture looks like.

It's not so much all the swivelling around - which is creepy enough. It's the way those little holes in their eyes open and close. ICK. It's like some sort of evil wink. It also looks sort of like the top of an old microphone from the 1940s. I don't like any of those connotations.

For some reason I can see Louis Wain painting mantis shrimp. They have that hectic, even hellish quality that makes his cats look so scary. Most of the bright-colored stuff doesn't even show very much - it's kind of hidden under a buglike shell that I don't want to show right now.

I think the mantis thingie is eating something here. It's eating this fish which is probably still alive. It's sickening, really. The eyes remind me of Jeff Goldblum's in The Fly when he has made his final transformation into that sickening rotting thing stomping around.

I don't like it, in fact it shouldn't be allowed, when things in Nature diddle their parts around like that, especially when they have a lot of legs. This thing has too many legs, obviously. Anything more than four is always too many. 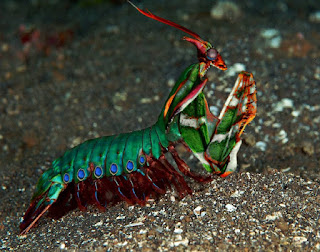 This shell may look pretty, but in black and white it would just be wretched, like a giant. . . mantis. I looked at the Wikipedia entry and it was too long, so I'll just quote the more interesting part.

Called "sea locusts" by ancient Assyrians, "prawn killers" in Australia and now sometimes referred to as "thumb splitters" – because of the animal's ability to inflict painful gashes if handled incautiously – mantis shrimp sport powerful claws that they use to attack and kill prey by spearing, stunning, or dismemberment. In captivity, some larger species are capable of breaking through aquarium glass with a single strike.

Along with being pretty frightening, this looks a bit obscene to me, as if the mantis shrimp has two penises like some legendary figure of myth. Bi-penal? Never mind. These creatures are the Sylvester Stallones of the sea world. I don't like Sylvester Stallone. 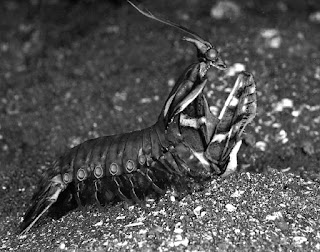 It turns out that, as with so many other things, there is a mantis shrimp subculture. I was charmed and somewhat taken aback when I discovered the tardigrade paintings on DeviantArt. It made the fact of tardigrades' existence somewhat more bearable. But I was blown out of my chair to see well over a THOUSAND images, artwork in all media including origami and paper clips, celebrating the mantis shrimp. All I can do here is provide the link, as I really can't reproduce any of it here. Well OK, just a couple, with accreditation. 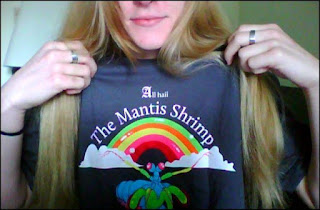 
Really, they're all good, and some of them are headspinningly wonderful, making me think I should just retire from all creative endeavour. It makes me marvel at the richness and depth of talent out there, and it pisses me off that most artists can't make a living from their work. They should be able to make a living just by painting mantis shrimp. Anyone who can make me marvel at images of something I hate is OK by me. 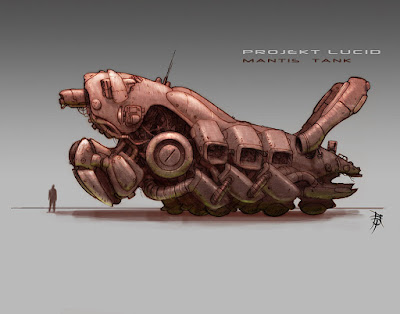 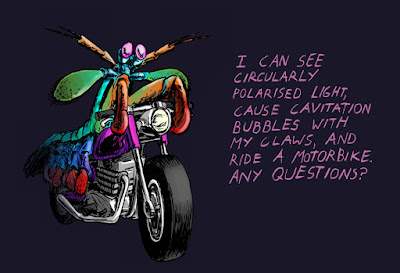 Posted by Margaret Gunning at 11:58 PM No comments: