While playing around with WTP/Ernest Shepard images, I decided to try to make a Pooh animation out of still pictures. Not such an easy thing to do when you have to find compatible images, then get size, colour, etc. to match. Well, it sort of worked, though it would have been nice to have more frames. Shepherd's watercolours had two styles: they could be quite detailed, but they could also be mere suggestions of animals, just shapes, and each of these pictures represents a type.

And look at this!! I spent quite a while on this one, and had to fool around quite a bit with things like perspective. Ernest Shepard was really a lousy artist by technical standards. In one of these two pictures, Piglet was approximately twice the size shown here. I had to tinker around to get him to look OK in relation to Pooh. Perspective changes alarmingly, as do the size and shape of the animals which seem almost carelessly drawn. Was it a style of the times, I wonder? Whatever it was, it sucks to make gifs out of these. Even though they turned out pretty damn good.

Posted by Margaret Gunning at 10:15 PM No comments: 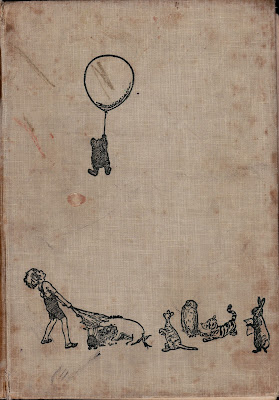 It has no back cover, and the blanks on the backs of the glorious colour illustrations are scrawled and scribbled with attempts at printing and cursive. Some of them might be mine. 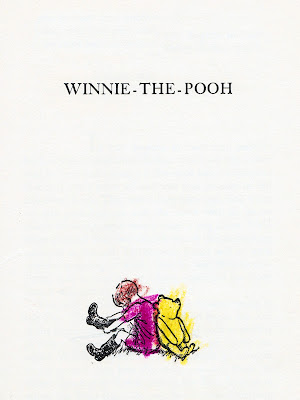 Somebody coloured this! It could have been any one of the four of us, but because it doesn't stay within the lines, I think it was likely me. 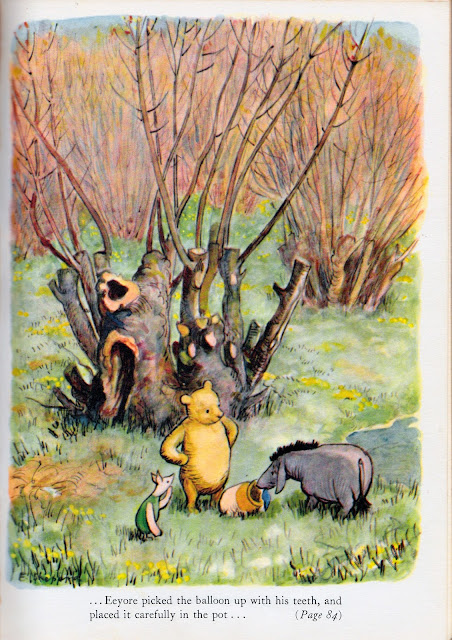 Today I got thinking about this book for some reason. It's a big thick book called World of Pooh and encompasses the Compleat Pooh: Winnie-the-Pooh and The House at Pooh Corner.

Were there only two Pooh books? Apparently. How many Disney versions? Erg. Let's not go there. 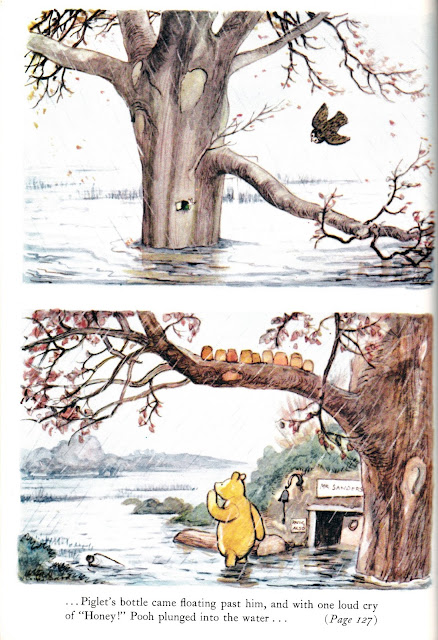 The best part of Pooh isn't A. A. Milne's tricksy language - which, to be honest, is a bit precious to my ears - but these wonderful illustrations by Ernest Shepard. This is the part that Disney screwed up so badly. I won't go into it, it's too painful. But look on these! These are scans, believe it or not, from my original book. Scans are always dodgy because they can come out grainy or covered with a hatchwork of lines like a screen door. The colours were a bit "off" on these until I clicked "colour correction" on my old Adobe program, et voila! Bright as new. 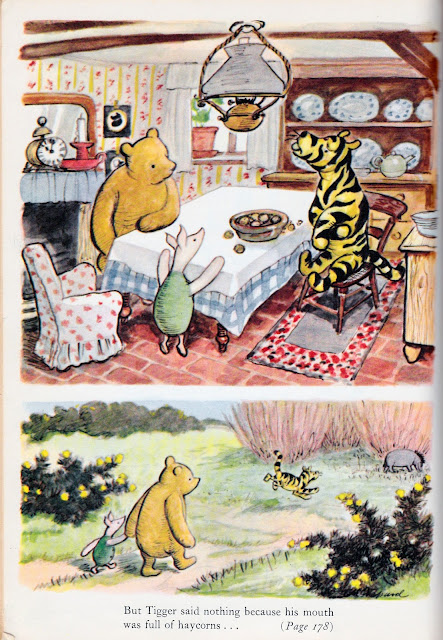 I liked Tigger as a character, until I heard that dreadful voice by Paul Winchell - damn. I wasn't going to even THINK about the Disney version! We did have a 78 rpm record with a book you followed (with original drawings) which was narrated by Jimmy Stewart. A lot of celebrities narrated childrens' records in those days. When you got to the point of turning the record over, Pooh said, "Rum-tum-tiddle-iddle-um-tum-tum". I'm wondering now, given that I found so many Children's Record Guild recordings on YouTube, if this one might be there too. 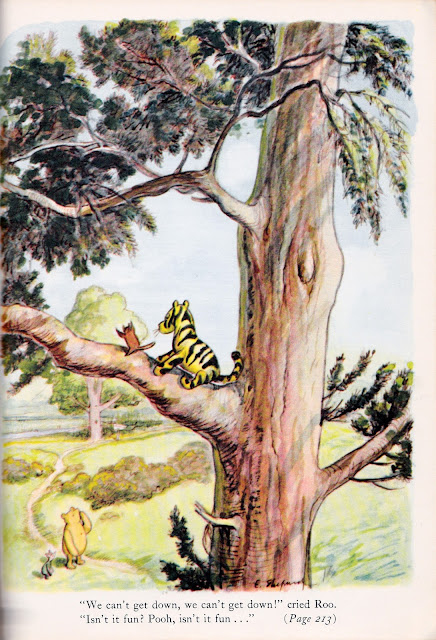 Ah, remember this one, where Tigger and Roo bounce up into a tree? How do they get down? Hell if I know, I haven't read the story in years. My kids and grandkids didn't go for the original Pooh, though I did buy Caitlin this same book, a much later edition but exact in every detail, including all the same Shepard colour and pen-and-ink illustrations. I think her mother gave it away. 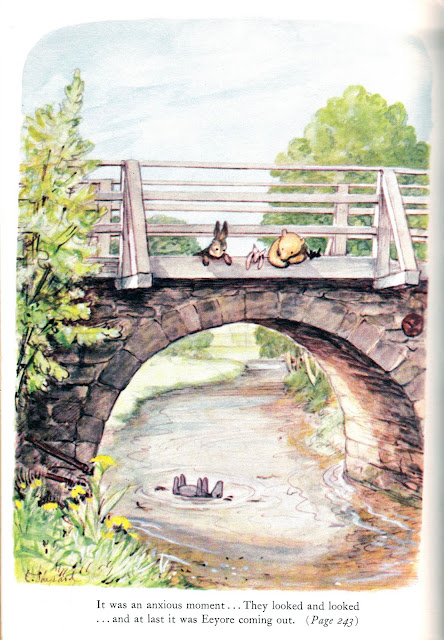 I remember something about throwing sticks into the river and watching them come out the other side of the bridge. But Eeyore? Not sure about that. It looks disturbingly as if he's dead. I do remember him losing his tail and Christopher Robin nailing it on again. 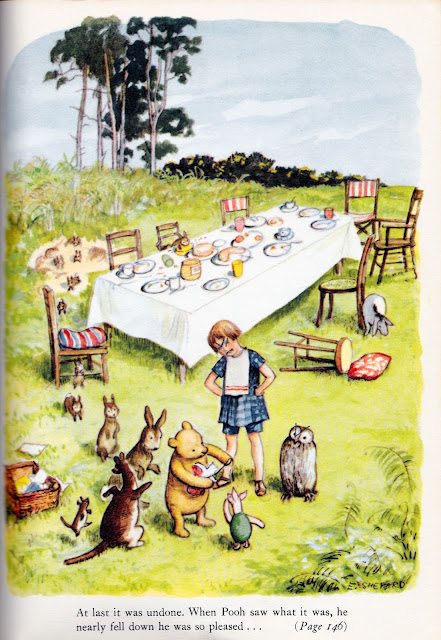 I did have a stuffed Pooh-bear, a very gritchy old thing. Stuffies weren't so elegant back then, and soon looked moth-eaten. My favorite was Piglet - no, actually, I WAS Piglet, the littlest and most hapless in the family, always getting into some sort of scrape. 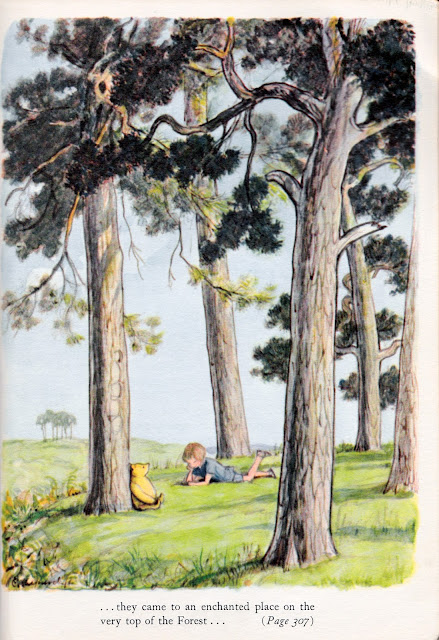 There really was a Christopher Robin Milne, and he had a very hard life because his father made him world-famous without his permission. Funny, all that is coming around again with social media. Some parents are frankly astonished that their children don't appreciate being utterly humilated on YouTube, screaming with terror and grief, tears pouring down their faces as their parents chuckle sadistically in the background. "This'll go viral for sure!" And it does, and it's shown on the news worldwide, and while everyone around me screams with laughter, my heart is breaking for the miserable little tyke being cruelly tricked for the sake of "views". Not only that: a couple of years later, such humiliation is not going to go down well when the kid is in middle school and wants to impress a girl. "Jesus! Did you see that video of Kyle on YouTube? What a dork!" There goes THAT romance.

POSTSCRIPT: I just looked it up, and yes, you can still get this book! It looks to be the same in every detail, that is, if they haven't cut corners in its production. I just ordered a used-in-very-good-condition one from Amazon, because it'd be nice to have a pristine copy to sit on the shelf alongside this well-used one. And the whole thing (including shipping and handling) cost seven dollars.

(This is a link to that old record - haven't heard all of it yet, but it's definitely the same. Like an embarrassing old video, nothing ever dies on the internet.)

SPECIAL BONUS MAP! I have this map in my old Pooh book - sort of - but it just wasn't in good enough shape to scan. Half of it was missing, for one thing.

But here's a pretty darn good version of it: 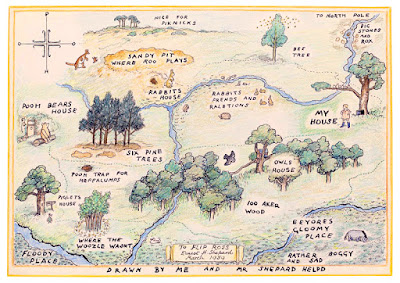 And half by half. 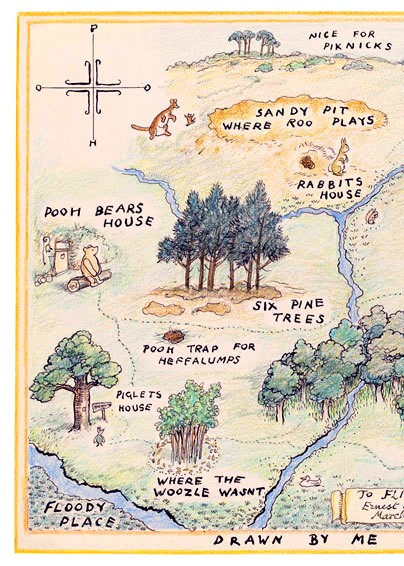 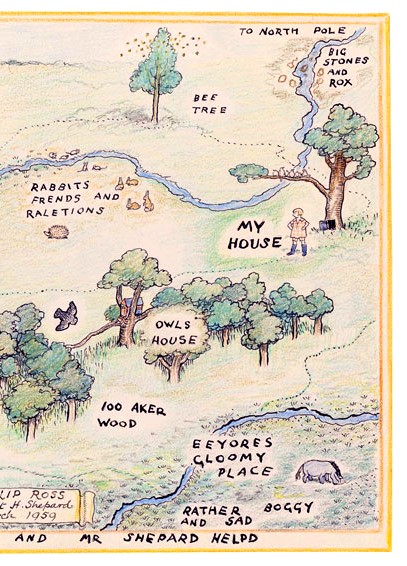 (and I finally got this to work)

Posted by Margaret Gunning at 12:04 AM No comments: