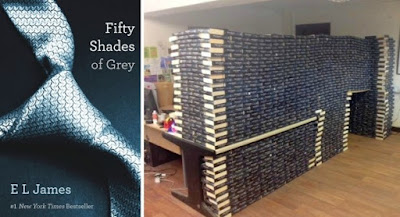 What goes around comes around. Or so they say. Never was this more satisfyingly proven than in this instance, in which the worst book I never read became a sort of throwaway, the kind of thing you give to Goodwill because you're never going to wear/read it again. In spite of the fact that a movie sequel is in the works, if not out already, at least some readers are tiring of the tawdry world of women enjoying getting the shit beat out of them. That kind of mindset sank the Ghomeshi trial sufficiently that he walked free - a fact that hit me so hard that I haven't even been able to write about it, much as I saw it coming. Why this strange phenomenon happened in an Oxfam store in Swansea, Wales, is anyone's guess, but maybe they just have better literary taste there, a hangover (!) from their most illustrious literary son, Dylan Thomas. Well, or at least their drunkest literary son.

Fifty Shades of Grey: the book you literally can’t give away 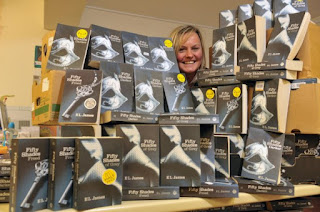 For a while, Oxfam published a list of its most-donated authors; between 2009 and 2012, Dan Brown was top. Could EL James and her Fifty Shades have beaten the Da Vinci Code author? “I think Dan Brown is still pipping it, actually, but [Fifty Shades] is up there,” says David Taylor at the Oxfam bookshop in Salisbury. Copies of Fifty Shades there are sent to the local depot for redistribution to other shops; his branch doesn’t sell it. “It sounds snobby, but there are 10 charity shops in our street and you can buy it in any one of them,” he says. “There’s no point in us selling it.” 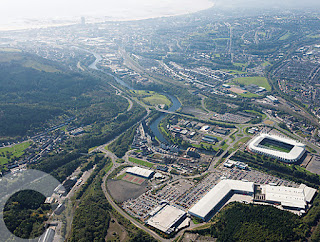 At the Red Cross bookshop in New Romney in Kent, only two or three copies of Fifty Shades have been donated. The most-donated books, says assistant manager Lorraine Logan, “would probably be Lee Child, Karin Slaughter, that type – crime fiction”. They also get a lot of military history and books about the area. “We’re in a quiet little town,” she says. I think she’s implying it’s perhaps not a hotbed of S&M enthusiasts. Quite what this says about Swansea I’ll leave to the imagination. 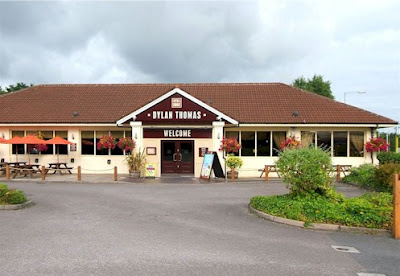 . . . And speaking of Swansea, birthplace of that poet once voted "the drunkest man in the world", I found a pub with his name on it in his home town. Reviews were rather tepid, averaging 3.2 out of 5. I've included some of the more memorable ones.

went there this afternoon, had a "codfather and chips" myself and for my wife, i should have complained immedietly but my wife said to leave it, the batter was overcooked and greasy with not much fish which was mostly grey, it is repeating ...More

Lack of staff and food was not so good for what you pay. Nacho and pulled pork starter with severe lack of pulled pork for £7.. avoid.

Had a gd time and gd staff.plus gd food

My food was cold. And the waitress spilled my desert on me. I complained to the lady in charge and she said she would send me a letter authorising a next free visit for 2. The letter never came. Obviously a ploy to get rid of me and my wife. Customers are not important to them that's why you pay upfront.

Ok for cheap food and a pint, but poor service due to lack of staff

You get what you pay for. Buy cheap buy twice. Both appropriate for this establishment. 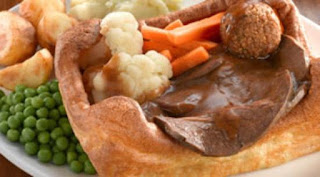 For the price the food is very good.

We had food poisoning after eating here

This is a place we have been visiting for a number of years as it is local. It used to be brilliant then slipped drastically for a time but we believe has recovered. Many other people must think so too as it is usually relatively busy when we go midweek. It is not fine dining by any stretch of the imagination but food is USUALLY good and ample portions. We are a family group of older generation i.e. 50's - 90's and they cater for the tastes of the group which is all we want.

Well I can't review the food as after standing at the bar for ages, when the barmaid finally arrived she told me I had to join the queue of about 8 people ordering food, all of who had arrived after me.
I told her I had arrived before them but she wouldn't have it, so I left!

POST-POST RUMINATIONS. This can't be true. I mean, the whole story of Fifty Shades in the Oxfam store. 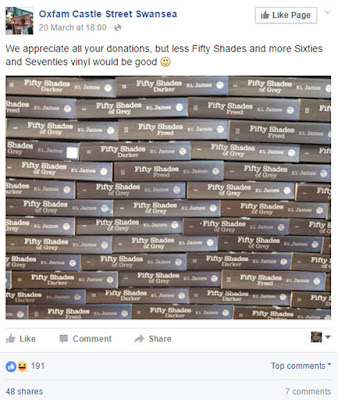 . . . or not to this extent, anyway. That igloo-looking thing would require HUNDREDS of donated copies of Fifty Shades. There aren't even that many people in Swansea, let alone older women with dirty minds who were willing to shell out however-many-pence for this thing a few years ago and are now bloody sick of it all.

The copies look identical, and they wouldn't. There would be various different editions, as there always are with bestsellers. Some would be without their dust jackets, or even their covers if the readers had gnawed them off in a fit of frustrated horniness.

This just doesn't make sense to me.

Are these really copies of Fifty Shades at all, or fake books? If they are, they were remaindered by a large retail chain, or perhaps sent over by the publisher (though it's unlikely they'd want to sell their product by donation in an Oxfam store in small-town Wales). Or this is a display in a whole different store, maybe in another part of the world - who's going to know, anyway?

And who in Swansea has the cleverness to make a stack of Fifty Shades symmetrical enough to rival Mr. Whipple's giant tower of Charmin Bathroom Tissue?

I am sure it's a hoax, though even Snopes hasn't caught on yet. I think it's meant to poke good-natured fun at the book, at Swansea, at Oxfam, at - oh never mind. I'm not even sure any more.