Let's get rid of all the humans!


In an open letter to the city’s mayor Ed Lee, entrepreneur Justin Keller said he is ‘outraged’ that wealthy workers have to see people in pain and despair 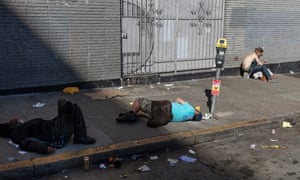 ‘They don’t care about nobody but themselves,’ one homeless person told the Guardian. ‘If you got money, you just want to grab anything you can get.’ Photograph: David Levene for the Guardian 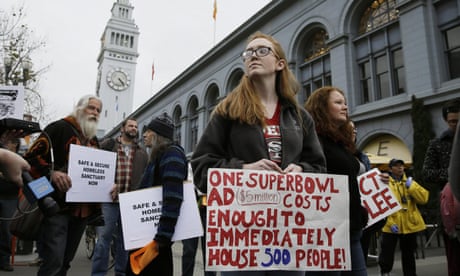 In only the latest cultural altercation between San Francisco’s tech workers and the city’s impoverished population, one tech worker has declared the homeless are “riff raff” whose “pain, struggle and despair” shouldn’t have to be endured by “wealthy” people commuting to work.

It’s a familiar story. A male entrepreneur (some might even call him a “tech bro”) – flush with the sense of self-worth and self-satisfaction that comes from living and working in a city and industry that treats him and his friends as the most important and intelligent human beings ever to grace a metropolitan area with their presence – takes a moment to think about homelessness. Not content to wrinkle his nose and move on with his day, he types those thoughts out. He publishes them on the internet.

And, there, with the click of a button, he enters the pantheon of infamous San Francisco tech bros. 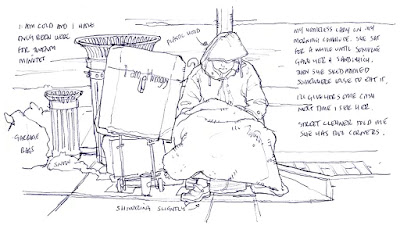 Justin Keller, an entrepreneur, developer and the founder of startup Commando.io, joined those exalted ranks on 15 February when he published an open letter to San Francisco mayor Ed Lee and police chief Greg Suhr:

"I am writing today, to voice my concern and outrage over the increasing homeless and drug problem that the city is faced with. I’ve been living in SF for over three years, and without a doubt it is the worst it has ever been. Every day, on my way to, and from work, I see people sprawled across the sidewalk, tent cities, human feces, and the faces of addiction. The city is becoming a shanty town … Worst of all, it is unsafe."
Keller explained that he had been moved to action by his experience over the holiday weekend, when his parents and relatives came to visit. Three encounters with “a homeless drunken man” in the street, a “distraught, and high person” outside a restaurant, and a man who “took his shirt off and laid down” in a movie theater left him angry and frustrated with the city’s homelessness “problem”. 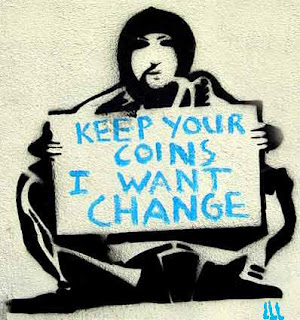 While Keller is not alone in his frustration that there are nearly 7,000 people living in San Francisco without homes, his letter is distinctive for its total lack of sympathy for the plight of those in difficult circumstances, focusing instead on the discomfort of the “wealthy”:

"The residents of this amazing city no longer feel safe. I know people are frustrated about gentrification happening in the city, but the reality is, we live in a free market society. The wealthy working people have earned their right to live in the city. They went out, got an education, work hard, and earned it. I shouldn’t have to worry about being accosted. I shouldn’t have to see the pain, struggle, and despair of homeless people to and from my way to work every day. I want my parents when they come visit to have a great experience, and enjoy this special place."

Keller does not propose a solution to San Francisco’s complex and intractable civic conundrum, though he does seem to cite approvingly the controversial “sweeps” of the homeless during the recent Super Bowl festivities:

"I don’t have a magic solution … It is a very difficult and complex situation, but somehow during Super Bowl, almost all of the homeless and riff raff seem to up and vanish. I’m willing to bet that was not a coincidence. Money and political pressure can make change. So it is time to start making progress, or we as citizens will make a change in leadership and elect new officials who can." 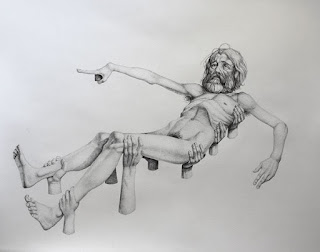 After facing significant backlash against the post on Twitter, Keller appended an apology for his use of the term “riff-raff”, writing that the word choice was “insensitive and counterproductive”.

As of publication, however, he has not reached the next stage of the tech bro homeless rant cycle. First comes the deletion of the post. In 2013, startup founder Peter Shih deleted his 10 Things I Hate About You: San Francisco Edition rant from Medium after the backlash reached such a fevered pitch that posters featuring his photograph were posted on telephone poles around the city.

Next comes the apology tour. In 2015, startup CEO Greg Gopman attempted to make amends for his own anti-homeless screed (he described the homeless as “the lower part of society” and “degenerates [who] gather like hyenas” and bemoaned the “burden and liability [of] having them so close to us) by launching a program of his own to “solve” homelessness.

(Gopman’s plan never went anywhere. One city hall official told the Guardian in 2015 that the entrepreneur’s plan to house homeless people in domes “remind me of a dog house”.)

In an email to the Guardian, Keller said that he was writing an additional blog post about the issue.

“The thesis of the post was that inaction by the city and officials is not working. We all as citizens of San Francisco need to figure out how we can improve the city and address the homeless and drug addiction problem straight on,” he said. 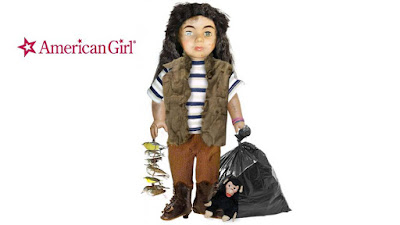 “I in no way meant to vilify homeless or drug users, my frustration was that we as citizens don’t feel safe. The amount of violent crime is increasing, and it affects everybody. What specific measures is the city taking to proactively help the homeless and drug addicted?

“Instead of crucifying me, we all as citizens should be crucifying the city and elected government officials for ineptness. The status quo is not working.”

Of course, Keller will likely only be the pariah of the internet for the next few days, while San Francisco’s homeless people are made to feel like the pariahs of the city every day.

“Being homeless is like being the germ of the city. That’s how they treat you,” said Bercé Perry, a homeless resident of San Francisco. Perry was standing outside his tent in an encampment underneath the Highway 101 overpass. The 42-year-old said he had been homeless for about one year, and he has little patience for the distaste some people have for his presence in the city. 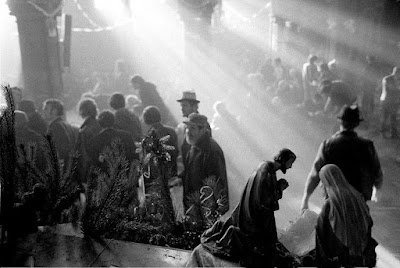 “They don’t care about nobody but themselves,” Perry said about the wealthy tech workers who’ve moved into San Francisco. “If you got money, you just want to grab anything you can get.”

A few blocks away, Michael Jones, who has been homeless for about three years, was frustrated that people are homeless and hungry in a city with so much wealth.

“I see all the food that they throw away,” Jones said. Still, asked about how he feels about wealthy tech workers, he would only say, “I don’t judge anyone.”

Madeleine McCann, 27, had some more pointed words for tech bros who disapprove of her. McCann has been living in a tent under the highway for about a month, ever since her van was towed, leaving her without a roof.

“They need to be a little more tolerant”, she said. “It’s not like they’re going to let us come shower at their house.”

AFTERTHOUGHTS. As you can probably tell, I am tired as hell after that last meditation on the stone church. It dragged up stuff that I never thought would be dragged up, but why am I here? To conceal myself, NOT say who I am? Why blog, then? For all is artifice and dross without Truth. And all that goes with it.

This piece was the epitome of "let them eat cake" - or not even that. Don't let them eat anything. Just get them out of my sight. Hey, we WORKED to get here. We got an education, made something of ourselves! We're not layabouts, we don't ask for handouts and lie around on the street, useless and unwashed. We are among the Hip and Favoured, a condition which is kind of like the Divine Right of Kings. To the manor born. Those who aren't to the manor born can just get out of the way. Get a big forklift or a bulldozer and heap them up and incinerate 'em, or at least push them off into a corner somewhere.

With no skills, no prospects, no education, no friends; quite likely, with learning disabilities, social handicaps, mental illnesses, drug dependencies, and histories of profound brokenness. Almost certainly, with histories of being kicked in the face, called useless, worthless, beaten, raped, thrown aside for dead. . . but listen. WE earn our keep around here, WE don't have problems like this, WE manage to pull ourselves together every day! If you can't manage to do that, if you can't get it together every day and go to work and  keep your nails clean, why then you can just get out of the way because I DON'T WANT TO SEE YOU.

It's terrible, tragic, how abusive situations replicate themselves. For it's this attitude, this callously dismissive, casually cruel attitude that creates "homeless" to begin with. It breaks people, wrecks their self-esteem. It's just a little bit hard to get that wonderful education that gives us all these advantages, when every day is a struggle for your life, a battle to keep your old man from screaming abuse, raping you or even killing you. When, for some really baffling, unknown, mysterious reason, all that childhood abuse has just a little bit of an effect on your mental health, who knows why!, so that you end up in an institution - for a while - until they dump you out, alone and unprepared. (And what's the matter with you anyway: you're out of the hospital now, you're free! For God's sake, go get a job, straighten up and fly right.)

And thus begins the downward spiral - or did it really begin generations ago?

Smug entitlement, narcissism, feeling like Daddy and Mommy's Little Wonder Boy - all these sicknesses have been fed and watered by social media and the Cult of the Selfie. As it deepens and broadens, so do social malignancies that force the classes even farther apart. Yes. I said "classes", as in "social classes", as in "I'm upper class and you're a piece of shit".

I don't know what to do about this. I've never been homeless, but I've felt like it, self-esteem-wise. I've had no home deep in myself, and had to try to climb out of that frightening pit again, and again, and again.  It has been hard.

Not being understood is part of the human condition, and none of us can hope for unconditional acceptance in this lifetime. OK then: what about tolerance? Tolerance meaning: I won't spit on you, I'll just barely stand your presence and try to keep my mouth shut and be civil.

Tolerance might be enough. At least, it would be a start.