Safe to say this was one of the more interesting plane meals I've
had #jetstarairways #planefood. I've literally no idea [what it was],
it upsettingly tasted ok but that could have been the hangover telling
me that!' Photo: instagram.com/williamrae27

Amused, confused and disgusted passengers have revealed some of the
most unappetising in-flight meals they’ve been subjected to on a plane
with pictures posted on Twitter and Instagram.


After living off rice for the last 10 days, I couldn't wait to have
an 'English Breakfast' when offered it on the plane. But then, I got
this. #planefood #britishairways #whatisthat #fullenglish' Photo:
instagram.com/chriswilko


The snaps have ranged from several unidentifiable, sloppy masses
and questionable pasta with “hard pellet-like things” to one British
Airways meal described as “the most disgusting plane food ever” as
well as a sad, skimpy cheese sandwich from Virgin Australia. One
disgruntled Virgin passenger once sent
"the world's best passenger complaint letter"
to Richard Branson, which went viral after it surfaced, in which he
described his "culinary journey of hell" on a flight from Mumbai to
Heathrow.


This was supposed to be some sort of Italian pasta, and I can
only compare the sauce texture to a bodily fluid. I could not, after a
lot of effort, identify the hard beige pellet-like things in the sauce.'
Photo: Kathryn Siegel (submitted to MailOnline)


One user posted a picture of his meal for others to guess what it
could be, while another user, williamrae27, admitted the meal he
had "tasted okay" even though he couldn't identify what he
actually was eating.

Images of other contenders for the world's worst airlines meals
can be seen on AirlineMeals.net.

A hamburger served on North Korea's Air Koryo, which was ranked
the world's worst airline by Skytrax earlier this year Photo:
AirlineMeals.net

Swimming in what looks like the water at the bottom of your
dishwasher, Ukraine International Airlines offers up a sad fruit salad.
Photo: AirlineMeals.net

However, a few users revealed some of the more enjoyable and even
"delicious" meals they've had on airlines including Qatar Airways and
Qantas.

Blogger's note. This was a cut-'n-paste job, obviously, as posting
links is not only dull, I am sure no one ever bothers to read them.
This does all sorts of bizarre things to the formatting, so it takes
a while to screw around with it before I can post it, with a few
flubs left over. I've had airplane food that was pretty much inedible,
but you can't even LOOK at this stuff, and it probably has
that steamed-dirty-socks-combined-with-disintegrating-brussels-
sprouts reek and institutional metallic taste,like something served
off a green plastic tray in a mental hospital.

Makes me feel just a little bit better that I can't afford to fly anywhere. 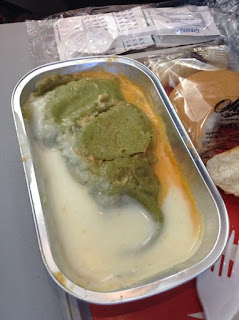 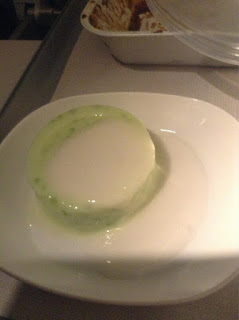 Posted by Margaret Gunning at 2:16 PM No comments:

Bondi dreams (Muskoka in the fall) 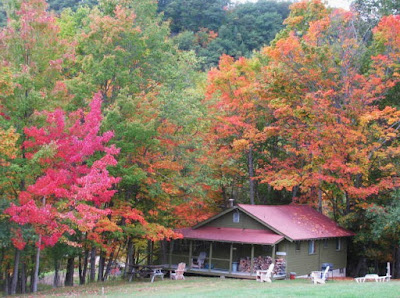 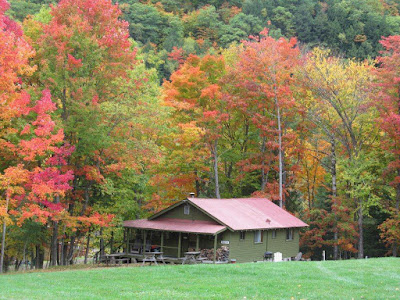 Posted by Margaret Gunning at 1:44 PM No comments: