I wish I knew who drew this - as usual, I can't find the provenance of it. Thank you, whoever you are, this gives me joy.

Harold walking along the beach at the estate of William Randolph Hearst.

A curiosity, in which a makeup artist transforms himself (supposedly) into various celebrities, including Harold who does some fancy moves.

Harold had superb balance,coordination and reflexes. And it's a good thing. The drop wasn't as extreme as it looks, but he still could have fallen six feet and hurt himself.

Posted by Margaret Gunning at 8:10 PM No comments:

"What is going on with FACEBOOK? I'm getting inundated with "friend" requests. If you have referred someone to my page and I've declined, I apologize BUT I only have just over 200 "slots" left. Please invite your friends to follow my FB page, "like" my Watchdogz page, and check out for my website which is coming out late next month. They can also view my book trailer (please repost the link). Thanks to the many authors who have connected with me and lent me some good advice, shown me some phenomenal reading material, and have been "friends." I hope you will continue on this journey with me."

For reasons that have to do with self-preservation only, I will withhold the name of the person who wrote this Facebook post. But I think it's a brilliant example of casual, tossed-off narcissism expressed as irritation: oh, those pesky fans of mine! Why must they overwhelm me with their petty requests to be my friend? As if they think they are close enough to my lofty status to "friend" me. I'm almost at the 3000 upper limit, for God's sake. Have they no manners? Don't they realize that the last 200 friend "slots" must be filled by people I love, cherish and see face-to-face every day (just like the other 2800), not to mention people who are good for my career? I have forgotten how to refuse friend requests, by the way, which gives me a very good excuse to complain about it here. 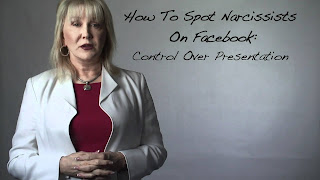 But then comes the topper. This whiny  post which is so disdainful and even contemptuous of her fans then switches to blatant advertising for her new web site and her books. Then her tone seems to miraculously settle down, maybe because this message has been sent out in one form or another about 50,000 times. Having prepared the ground by letting everyone know what a literary superstar she is, she then moves in for the kill.

I see this sort of thing all the time on FB: sometimes phony irritation about those pesky people who debase themselves with abject adulation, sometimes phony humility ("I don't know how this ever happened - it seems impossible - I know I probably don't deserve it - but GUESS WHAT, guys! I just won the Giller Prize. Yippee!"). One strange one I saw went sort of like, "I hate having to do this - it just tortures me every day, but I HAVE to do it, it's part of a writer's burden. My publisher insists that I promote myself, so it's not my fault. They insist I talk about the, no, I won't say it,that I announce to everyone, not that I want to, my nomination for the Gasbag Award for 2015." 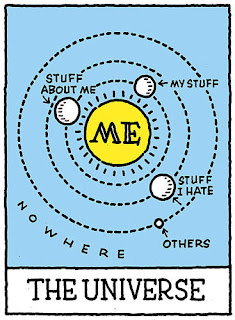 There are twists of double, triple and quadruple meaning here, all of them veiling a narcissism that causes a level of nausea in me equivalent to spraying an entire can of Reddi-Whip in my mouth at once. Nobody's straight about it. The petty foot-stomping over all those presumptuous fans is the worst, but I've also seen things like, "I apologize to all my friends in advance. I'll be taking some time off Facebook for some much-need R & R. Be back in an hour." One went, "My email is down and is going to be down for the next half-hour. Please message me on FB - not all at once, please, I can't possibly get through them all! - or email my overflow email, or my overflow-overflow email, or just sit there and miss me for half an hour. Or better yet, go on my fan page or buy my book on Amazon and give me five stars. OK?"

The published authors are snooty, the "famous" published authors who actually have an income are astonishingly, headshakingly vain and narcissistic. I don't know how many times I've seen links to artlcles such as, "Why it's so heartbreaking to fail as a writer," which consists of a few paragraphs about what it's like to be hopeless loser who never gets anywhere because they don't know what the hell they are doing. Then comes the REAL article: how I beat the curse of being a hopeless loser and got a $250,000.00 advance on my next novel that isn't even written yet. So what the hell is going on here? "Yes, OK, I know how it must feel to be a total failure, happens to the best of us, and it might even have happened to ME, except, you see, I know what the hell I'm doing. And you don't."

Say what you mean, people. If you're a failure, poop it out. If you're successful, march around with a banner. Just don't be so goddamn devious, please - you are making me sick.


Post-blog blob. Just thought of something that happened quite a few years ago at a writer's workshop. A novelist, best-selling by Canadian standards - i. e. a few thousand copies - was telling us all about the perils of fame, and what a nuisance her fans can be. She told us a story to illustrate this. After doing a reading from her latest best-selling novel featuring a dysfunctional Canadian family living on a broken-down prairie wheat farm in the 1800s, with the mother giving birth to a stillborn baby in the barn, etc. etc., a fan came up to her and said, "I just wanted to tell you that your reading brought back all sorts of vivid memories for me. Your character Mac McMackintosh reminded me so much of my great-grandfather and his stories of the Great Grasshopper Plague of 1892."

The author looked at us in horror with a sort of shrinking-back, dread-mixed-with-disgust body posture and said in a whiny voice, "I don't want to get involved with these people and their traumatic memories! I have nothing to do with their dysfunctional families! I don't want to hear about how my work triggered whatever-the-hell in them. That's none of my affair and they should know that." (Eye-roll, shrug)"Honestly." Composing herself, rearranging her poofy
hair and straightening her I-don't-really-need-these glasses: "Besides, it was crickets."

BLOG BADDA-BOOM! A follow-up to the follow-up to the quote from my anonymous friend's Facebook page. I am sure she has no idea of the staggering level of narcissism and entitlement expressed in her post. But it would be no fun without it!:

"Wow, this has been an eventful 24 hours. First of all, I have had to decline so many friend requests the past week as I have been swamped. Unfortunately, some people are not happy about this. I invite everyone to follow my FB page, "like" my Watchdogz page, and keep an eye out for my website which is coming out late next month. Facebook places a 5,000 person limit on "friends" and of course, we know this can be difficult. As of writing this message, I have 188 spots left and have been trying to carefully select people who I feel will genuinely be supportive to me as an author and will continue on this journey of my mystery/thriller adventures." 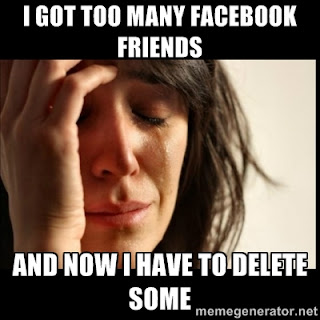 "Over the last couple of days, I have sadly lost a longtime "personal" friend who has accused me of "poaching" from his friend list to develop my own friends and demanded that I cancel them from my account. I value all of my FB friends and I have contacted each and everyone of the formerly (I have blocked him from my page) 60 mutual "friends," that we shared and advised them of the situation, inviting them to "unfriend" ME if THEY so desire. This individual is attempting to get me "banned" from Facebook and has launched a very vicious attack on my integrity. I would like to say, I value all of my friends, am responsive to their thoughts and comments and do not wish to intrude on people who think otherwise. Please feel free to "unfriend" me if you so choose (although, I hope you won't) as I am also feeling strained by people requesting to join my page that I have had to regrettably decline.
Phew! I thought, that I would enjoy my retirement and hopefully entertain some people with the stories (that my personal friends all know) I love to tell.
Blessings to all,
Narcisse A. Nonnee-Mousse
P.S. This is my book trailer:
(removed by blogger)

You know, I have all those same problems, but I have decided to raise my maximum number of friends to 7 billion, thus taking in all those poor Third World souls who need my enlightenment. Sorry this is so long, I just had to include that last, noisome entry. The author, having been unfriended by me, now must scramble frantically for a replacement to top up her list. Such a hemorrhage! Oh well, she told me I could do it.

P. S. to the P. S.: This doesn't deserve a post on its own, but it's yet another example of "oh God, poor me, I'm in such pain because I just have SO many people reading my stuff!" It's backhanded narcissism, but what dismays me is how many likes and "oh, poor baby" comments she got on Facebook. Sharyn Wolf wrote some sort of memoir about being a shrink (!?) whose marriage broke up, and oh God, more than 250 (NOT 249, NOT 251, though it's likely up to 2500 by now) people sniped at her for writing such a shallow useless thing. ONE person said she liked it, but it was Cher, so it kind of negated all the criticisms. If you believe in love. . .


Sharyn Wolf Oh, sadly, this is true. I had more than 250 comments--a surprising fight between a bunch of people who thought I should be drawn and quartered against one kind soul who claimed that English teachers don't have to publish a novel to teach writing. I read an interview with about a million years ago, where she said that with 50 great reviews, she only recollects the few horrid ones. I learned recently that we cling to those because our brain is velcro with the bad stuff and teflon to the good.

Posted by Margaret Gunning at 2:03 PM No comments: