My life in glasses 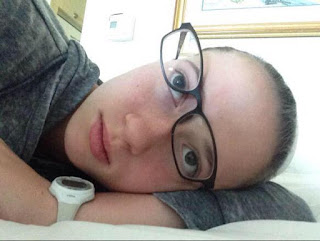 This is one of those rare (rare, RARE) photos from Facebook that provoked an almost visceral response in me.

For nothing but a photo could sum up what it is really like to lie down with your glasses on. 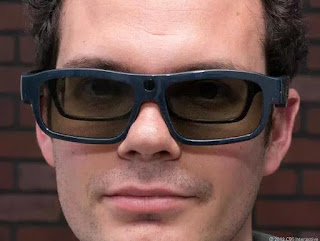 And how's this for AWK-ward: having to wear two pairs of glasses at the movies, the 3D ones on top of your regular pair? Double your nerdness, double your fun. 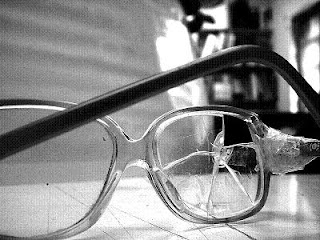 It's hard for me to even find illustrations for the next few points: getting your hair caught in the hinges of your glasses. Trying to put makeup on when you can't see a bloody thing.

Trying to read a magazine at the stylist's when I have all that colorizing goop on my hair and can't wear my glasses. Shoving the magazine two inches away from my eyes and moving it around.

Worst of all, trying to find a new pair of glasses that flatter you, when you HAVE TO TAKE YOUR GLASSES OFF to try them on! 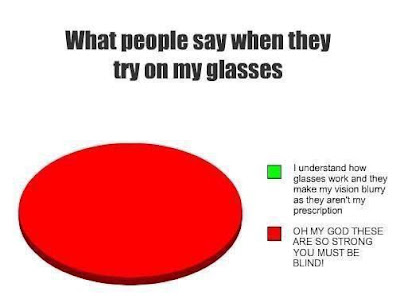 This hasn't happened to me for a while, but it did in high school for some reason, back when lenses were actually made of glass and weighed as much as an average schooner. People would snatch them off my face and try them on and bleat, "Gawd, are you ever BLIND!" I even had a clerk at Pearle Vision look at my prescription once, and exclaim, "Whoaaaa!" Needless to say, I never went back there. 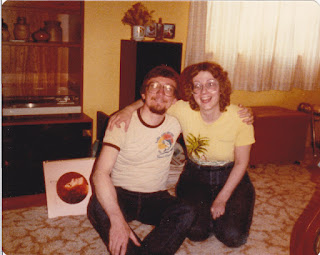 This is a mighty shiny couple, and it's easy to imagine our glasses clinking together. When I met Bill his glasses were held together with a paper clip and tape. Practically love at first sight. 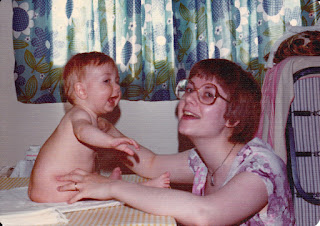 It's hard to see the thickness of these, but it's nearly the same as the width of the frame. In those days glasses used to leave a bleeding trench on the bridge of my nose that never quite healed. 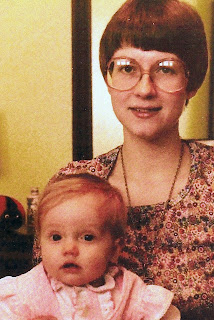 Posted by Margaret Gunning at 5:27 PM No comments:

What am I doing wrong?

No less a Hollywood legend than Kirk Douglas once had a pet project that didn't get off the ground.

He had read an obscure novel by an eccentric writer named Ken Kesey, formerly known for writing a stoner road trip story called The Electric Kool-Aid Acid Test. This one was set in a state mental hospital, extracted black humor out of desperate circumstances, and was treated like rat poison by every major movie studio in Hollywood.

It was called One Flew Over the Cuckoo's Nest. 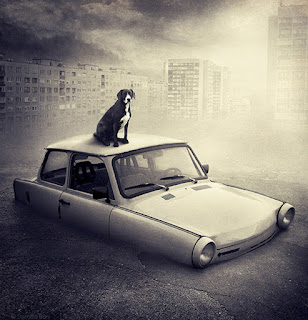 Coming up empty again and again - movie executives were appalled at the very idea of making a comedy about mental illness - Douglas finally arm-twisted a playwright into adapting the book for the Broadway stage. He starred as the hell-raising rebel who crashes the doors of the hospital, Randall P. McMurphy. As Douglas writes in his memoir, The Ragman's Son:

"The reviews were murderous.Walter Kerr in the Herald-Tribune said, 'One Flew Over the Cuckoo's Nest is such a preposterous proposition for the theatre that it could be dismissed very briefly if it weren't for the extraordinary tastelessness with which it has been conceived.' Howard Taubman of The New York Times wrote, 'Do you find the quips, pranks and wiles of the inmates of a mental hospital amusing? If you do, you should have a merry old time at One Flew Over the Cuckoo's Nest."

And so on, and so on. Do you hear the sound of a chainsaw in the background?

Not to be deterred, Douglas continued to shop the film script around, only to be told the same thing, or ignored outright.

"I crawled back home to Los Angeles like a wounded animal, defeated in my last battle to become a star on Broadway. I licked my wounds and moaned to (his wife) Anne, 'I gave New York a classic and they don't even realize it.' In between movies, I was busy taking Cuckoo's Nest to every single studio. They all turned it down."

Needless to say, the film finally got made and became a classic. No one complained about the setting and characters being in poor taste. There was an underlying compassion and tense drama just beneath the dizzy surface humor that gave it substance and humanity.

And Kirk Douglas was nowhere to be seen. The man who had pushed and pushed his pet project relentlessly for ten years until it was finally realized had been shoved aside. When it came time to assume his plum role as McMurphy, they told him he was too old. The role went to a relative unknown named Jack Nicholson. 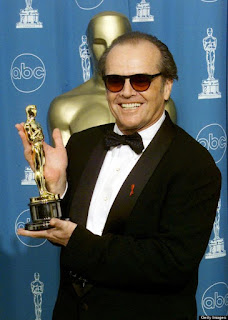 So what am I getting at here?

I am trying to figure out where I am with my novel. It has been excruciating to pursue (or try to) what I'd really like to see happen with it. Can you guess what that might be?

The Glass Character isn't a Lloyd bio, but Harold Lloyd is its centrifugal centre. It would fly apart without him. He is the magnificent obsession who returns again and again, illuminating everything and trailing stars and comets in his wake.

Let's get to it, let's stop pretending: it's an embarrassing proposition for me, a nothing little Canadian author whose books don't sell, to get a movie adapted from her story. And that's exactly what I want to do, need to do, and even believe is quite possible to do, though at this point (at THIS point!), no one else seems to agree with me.

I have no contacts in the film industry, absolutely none, and even if I did, I doubt if my communications would ever hit home or create any real interest. The idea of a Lloyd bio has been tossed around for years, far back enough that Jack Lemmon was once considered to play him (since Harold admired his brilliant combination of anxious comedy and poignant drama, with leading man looks thrown in for good measure).

So I am left with an embarrassed feeling. Why embarrassed? Because everyone else is embarrassed. For me. Part of it might be my Canadian-ness, that deeply-ingrained feeling that we are not ever, ever, EVER supposed to aggressively promote ourselves. It's somehow shameful to call attention to yourself like that. So there is this feeling of, OK, Margaret, here, take your medication now and take your dream home and put it to bed for good.

I feel this deep humiliation in myself, because it is such a ludicrous, almost insane idea. At the same time, I am absolutely certain it could happen and even would happen in the right hands. But I have not found those hands yet, in spite of what seems like truckloads of books sent out and hundreds of dollars of postage paid, all in the name of total futility. They just appear to fall into an abyss, proving I never should have called attention to myself to begin with.

I am an embarrassment, that woman who won't go away, who seems to think she has something here. She won't stop bugging me so I'll ignore her, maybe after some initial interest (leaving me to wonder: just what did I do wrong? Did I care too much? Did I not show that I cared enough? Am I just a natural-born, dyed-in-the-wool failure?)

Such is my reality, on some days, but I am not even supposed to say so. 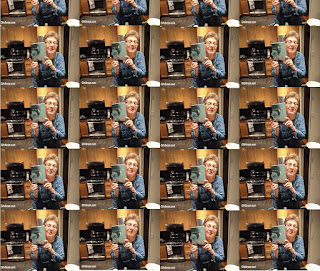 This will not happen, reality tells me I am doomed and being silly and embarrassing myself to even want it. And yet, and yet. I know it could be realized. Nothing will kill that hope, though God knows I have tried to kill it a million times.

I try to comfort myself with Kirk Douglas' ten years of slogging to get a movie made that he couldn't star in, because by the time he got someone to pay attention to him, he was "too old". Unfortunately I will be too DEAD by then, in which case it  truly will be too late.