Be it known that there are very few things, or people, in this world that give me hope. I think in 50 years this planet will be so degraded that billions will have died, and conditions will be intolerable for the rest, perhaps the worst humanity has ever known. And as humanity is wont to do, the remainder will simply tear each other apart.

BUT MEANTIME, we have this lovely man, this laughing Buddha, this Dalai Lama who has become such a profound spiritual leader for saying such simple things. Simple, but perhaps not easy. I'd make a gif of this, but. . . you've got to draw the line somewhere. Since he has been around for a long time, there are even photos of His Holiness with Thomas Merton, but we won't go there.

So, between the Dalai Lama, Pope Francis and Malala, will humanity make it? No. But at least the slide down into unimageinable hell will be, perhaps, a little less horrendous. 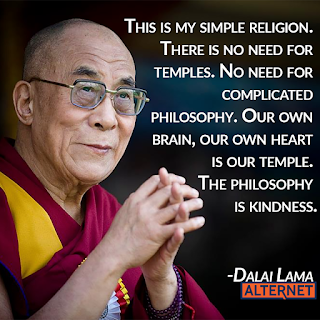 Posted by Margaret Gunning at 4:26 PM No comments: