Bobblehead Pope Francis: I want one of these! 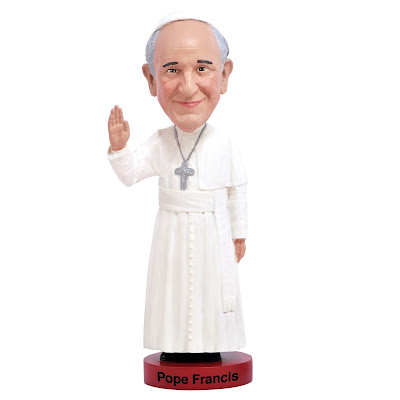 Catholic meant those other kids we never played with, though I don't remember being told not to. They walked in the opposite direction to school. Catholic meant kids in uniform, and those bizarrely short pleated skirts that barely covered the girls' bums.

Catholic meant Blessed Sacrament School and The Pines convent on Ursaline Avenue, where I had to go for my violin lessons. Shit-scary place, looked medieval, if I had known what that meant.

Catholic meant exorcisms and stuff like that, and Mary, a big deal over Mary who was very much a supporting player to us Protestant kids. 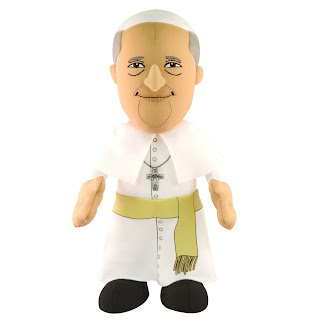 Being Irish, Catholics represented a deep, unspeakable schism. We just "knew". Just as my uncritical grandma from northern Ireland described people from the south of Ireland as "rather common", Catholics would have been described as Papists, if they were spoken of at all.

But I don't have to think about any of that any more, because, like a miracle, we have Pope Francis, who makes more sense than any spiritual leader since the Dalai Lama.

And I love him, too.

Posted by Margaret Gunning at 2:39 PM No comments:

These odd little gifs aren't from that show. That show has a very, very strange number in it called Triplets, in which Astaire and Nanette Fabray and that other guy (? It was supposed to be Levant, but his knees were shot) play three supposedly-identical babies. I think they did it with their shoes on their knees. Long ago, I saw a sort of surreal version of this number in Spanish and posted it somewhere on my blog. But do you think I could find it? How to search for it? Spanish version of Triplets? There went my idea for a great gif.

Somehow I ended up with this strange number, Astaire with Eleanor Powell, one of his better dance partners (though the public loved Ginger more). But my usual program, Gifsforum, is down AGAIN and I had to use MakeaGif, which doesn't make a gif very well. You can go up to 20 seconds on them, which is nice, but look at how they come out! Jerk-a-rama. I decided to go for it and use it for effect. There are much better-quality clips of this dance, but I liked the surreal phosphorescence of this one.