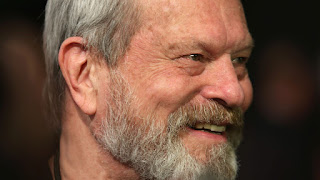 Terry Gilliam really wants to make an adaptation of Don Quixote. He's been trying to get it made since the late ’90s — Variety reports that he's made seven attempts in total — but this latest attempt may finally get it done. At least, a series of reports and quotes from Gilliam suggest as much. And the most surprising part: it may happen thanks to Amazon.

Gilliam told Indiewire this week that Amazon is partially funding his adaptation, titled The Man Who Killed Don Quixote, and that it plans to stream the film following a short run in theaters. Assuming production doesn't go awry again — it can't happen again, right? — this would be a smart grab by Amazon. It might not attract wide attention, but it'll certainly get Amazon credit from cinephiles, which isn't a bad way to kick off its original film program.

There hasn't been an official announcement from Amazon (perhaps it would rather wait, given the film's history), but the story seems to be adding up. Gilliam said back in Augustthat his Don Quixote had funding, and Deadline later reported quite vaguely that he had a deal with Amazon. Now Gilliam is stitching the stories together. There's even been casting news, which at the very least shows that there's real movement here. The film is, once again, supposed to shoot next year. Entertainment Weekly reports that it received confirmation of the news from Amazon.

Perhaps it shouldn't be so surprising that it took a new media company looking to make a name for itself to make this risky, fan-favorite project start heading toward reality again. It's essentially the same strategy Netflix took when it restarted Arrested Development or, to a lesser extent, that Hulu is trying to take with The Mindy Project. It may not appeal to an enormous audience, but it makes people pay attention.

GILLIAM'S QUIXOTE HAS HAD AN UNFORTUNATE HISTORY

And Gilliam fans have certainly been paying attention to the long and strange journey that The Man Who Killed Don Quixote has taken on its way to the screen. In the late ’90s, Gilliam began work on the project and eventually started filming, in 2000, with Johnny Depp in the lead role. A series of issues, including flash floods that destroyed sets, quickly caused production to shut down. Since then, Gilliam has tried unsuccessfully to get the movie going again with different actors. Now, even the script is different.

"I keep incorporating my own life into it and shifting it," Gilliam told The Wrap in August. "The basic underlying premise of the version Johnny was involved in was that he actually was going to be transported back to the 17th century, and now it all takes place now, it’s contemporary. It’s more about how movies can damage people." Basically, it sounds like the story is going meta and incorporating history of the failed Don Quixote into the newDon Quixote. Hopefully we'll all be watching it on Amazon next year. 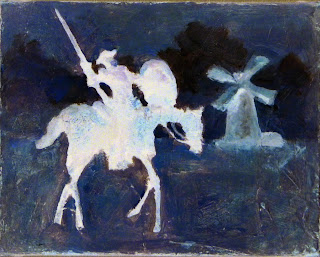 If you'd like to hear Richard Kiley's majestic performance of The Impossible Dream, start the video at 7:00. This was one of those things that doesn't happen any more: a 10-minute chunk of live theatre presented on The Ed Sullivan Show, uncut and uninterrupted. Kiley's performance here far surpasses the many studio versions, since his voice is actually not at its best (no doubt they'd already done a matinee performance that day) but slightly rough around the edges. Like any great singer, he decided to use it rather than fight it, giving him a heartbreaking catch in his voice in a few places, as if he is about to weep. The makeup seems overdone mainly because they're probably still in makeup from the matinee performance, and the facial expressions are exaggerated but would look fine from the audience. This is theatre, people.

Narcissists on parade: come on and suck my blood! 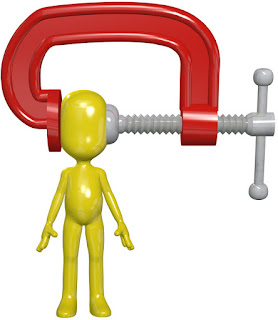 Though it did not make me happy and sometimes made me feel downright guilty, I had to cut out a lot of dead wood this year that was becoming oppressive. Denial suffocates me, and of course, deniers deny the denial and turn it around and make it YOUR fault.

There is a lot on the internet now about narcissism, which used to be called, “Oh, isn’t he good-looking!” The perpetrator would slide by on his good looks like a used car saleman rolling back the odometer. Everyone would ooh and ahh and clasp their hands in approval, then wonder where all their money went, or even where their spouse went.  But all this still goes on, vastly amped up by the internet. 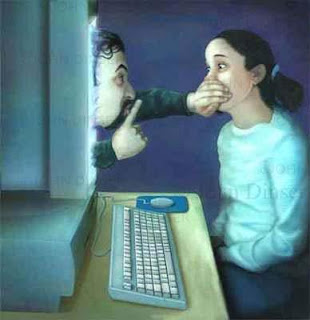 Yesterday on the news, I saw yet another story about an attractive, accomplished, well-off woman falling “head over heels” with someone she “met” on a dating site. She had never actually MET him, of course, but that didn’t matter. He sent her photos on Instagram, didn't he? Actually meeting someone in the flesh isn’t a priority these days, because everyone carefully constructs their own image, which seems to be enough to convince people. By some magic of fiscal seduction he wangled away a quarter of a million dollars she had salted away to look after herself and her ageing mother. He sucked it away and disappeared and went on to the next attractive, accomplished, well-off victim.

My psychiatrist (yes, I see one! Zip-a-dee-doo-dah!) once talked for an hour about narcissism, and my eyes were hanging out of their sockets like those trick eyeballs on springs. It was a perfect description of my older sister, for one thing, who always left you with the unpleasant feeling that you had somehow shortchanged her or let her down, while garnering enormous admiration for herself (she thought) by inflating herself like a grotesque balloon. I am still sorting out, or trying to, how toxic that was for me and how much damage it did. 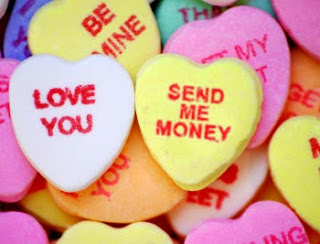 But back to the main story. There was a movie called Catfish - I just looked it up and reeled at the fact that it came out FIFTEEN years ago! - all about the phenomenon of the phony, narcissistic lure which has grown like a malignancy, affecting women in ways that make me scratch my head. Are people THAT desperate for companionship that they fall “head over heels” for someone who doesn’t really exist except as some sort of heartless parasite? Evidently. Personality disorders thrive in the strange world of the internet, because you can always manage and foster the impression you are giving, hold the mask up, and if that one gets you in trouble, hold ANOTHER mask up to dupe yet another lonely person.

I constantly wonder how this can be. Once Caitlin and I played a hilarious game based on a news story we had seen. A heartless, manipulative man somehow found out about an elderly woman who had not seen her son in a very long time. He phoned her up and said, "Hi, Mom! It's Johnny!" Mom was over the moon, even though she said at one point, "But you sound so different." She ended up wiring him thousands of dollars before someone intervened. Caitlin and I took turns over the phone being the elderly woman and the son, our scams getting more and more outlandish until we were literally rolling on the floor laughing. By the way, at the time, Caitlin was TEN YEARS OLD.

But there’s another side to all this, the narcissist who seems humble or even downtrodden. This is an exquisite form of parasitic behaviour with many evil twists and turns. It's the person who used to exist and has been so eroded by the unfairness of life that just being in the same room with her is completely exhausting and depressing. I call this the “how could you?” model, the one who acts so downtrodden that you dare not say anything to criticize her.  This is usually someone who has buried her ambitions like a corpse, then spends the rest of her life fuming, fuming, fuming over people she hates (but is usually poisonously polite to) who are morally corrupt and doing everything wrong.

Of course she has a gigantic hole at the core, as every narcissist does, which needs constant filling and refilling from others to keep her from feeling dead. Which means that part of the friendship contract (which is never spelled out and which never changes) is that you must constantly build her up to shore up that rotten or non-existent self-esteem. Her traumatic background seals the deal: how could you not be sympathetic to her after the kind of childhood she suffered? (I have come to be wary of any statement or thought that contains the words "how could you?").

She is a misunderstood, "good" person, of course, no one appreciates her, and your job is to keep pouring it in and pouring it in like booze into an alcoholic, while it all steadily pours out the bottom. Whatever narcissists have that keeps them manipulating like that, it's never genuine self-esteem, or they wouldn't need to suck so hard.  As Bob Dylan once sardonically wrote, no doubt describing the malignant trappings of fame, "Show me someone who's not a parasite/And I'll go out and say a prayer for him."

The things everyone is doing wrong are the same things SHE does, of course, and far worse, but rather than take responsibility, she turns it around and fumes and fumes. And fumes. And fumes. It never bursts into honest flames but smolders like a shit fire underground. The smoke goes up your nostrils and kills you with its reeking toxicity, but you dare not complain or you are being a traitor and inexplicably disloyal. What has SHE ever done? Nothing! But that’s just the trouble. Too many people shove away their real dreams and ambitions, letting them rot while they insist they never wanted them in the first place, and complain about everyone else's worthless success. The downtrodden have the most hyperinflated egos of anyone I know. 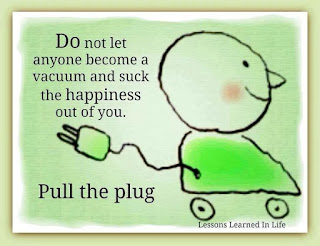 It’s getting harder and harder to find someone who WILL burst into honest flames and be straight with me. I don’t expect them to be any more perfect at it than I am. But please, PLEASE do not try to con me, swindle me with a cry for pity, apologize in a way that feels about as authentic as the proverbial $3 bill, and ask me to pour gallons of my own precious energy down a bottomless hole that you will never acknowledge because you are too busy soliciting even more sympathy and complaining about everyone else. No thanks, that’s over now. Am I lonely? Who cares. It’s a cleaner loneliness, because in spite of having to pay a price I never anticipated, I am no longer buried up to the chin in shit.