Believe me when I say, I did not create this fascinating powerpoint/slideshow presentation (transcribed awkwardly here, as I didn't want to just post a link, I hate that!). I just stumbled on it when looking for more morbid stuff about GG's brain tumor. God, there is a lot of morbid stuff about George's brain tumor, including an incredible amount written about it in actual medical journals. More about that later (can't wait, eh?). But I also found this. I didn't really find a name to attach to it however, except a username for Tumblr, astairical (great name!) "who has a George Gershwin PROBLEM".  I didn't even know such creative slide shows existed, but now I do. And since I, too, am developing a serious George Gershwin PROBLEM, I could not help but become seriously involved.

The presentation/piece/display/paean/jeremiad/threnody/rhapsody is written in the tone of wild admiration I would normally save for Harold Lloyd, but hey. It becomes apparent that poor dead George still wields quite an influence. It's done in a kind of verbal jazz style that I liked more and more as I read it, and the photos are pretty dreamy too. GG photographed well, maybe looked a little too smooth or Godlike to seem real. But whoever this is, and it must be a female, "got" George at least as well as some of his biographers. She gets all the highlights of his life right, anyway, and captures that great heady surf, the ozone in the room exploding, that people remember about him. Such fascinating rhythm George got: Are you out there, musical man?

And astairical: have you heard the Cuban Overture? How'd you like to rumba with George? It's the next best thing. Give it a click. 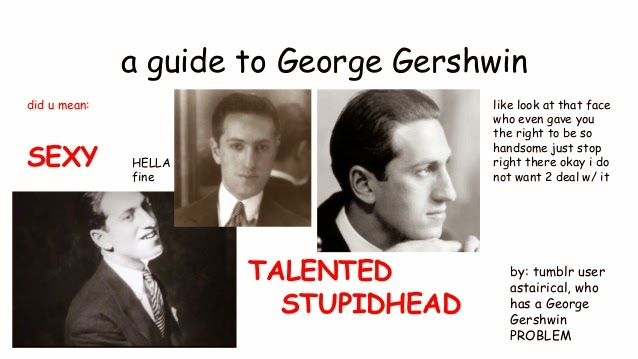 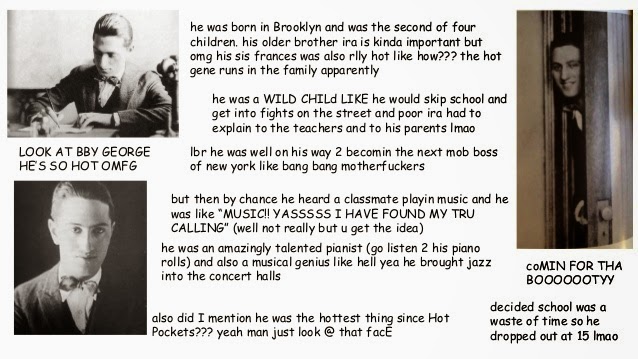 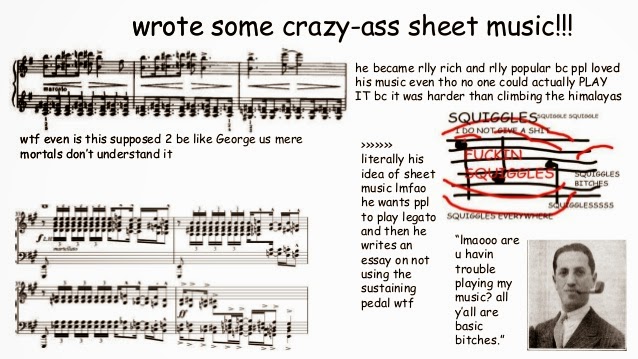 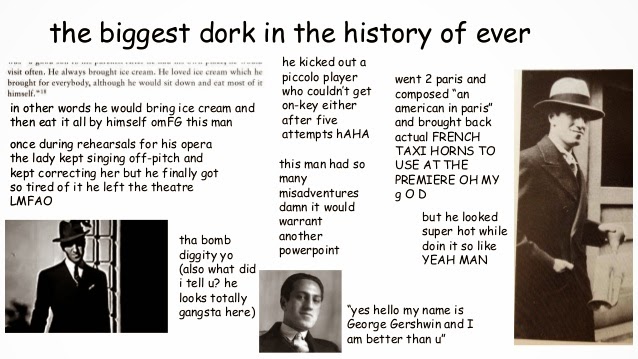 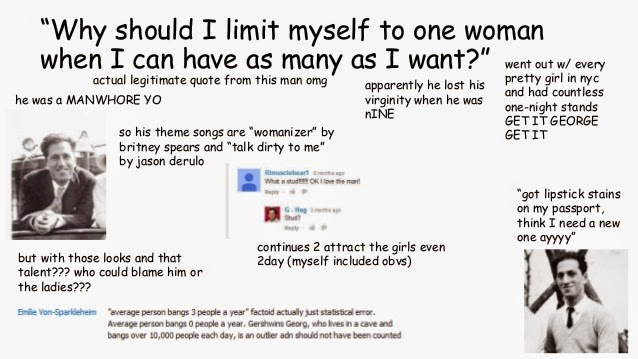 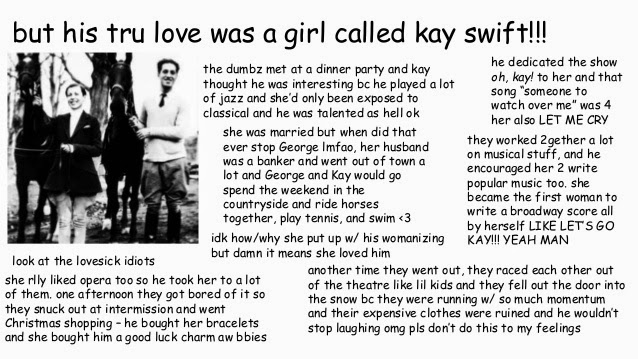 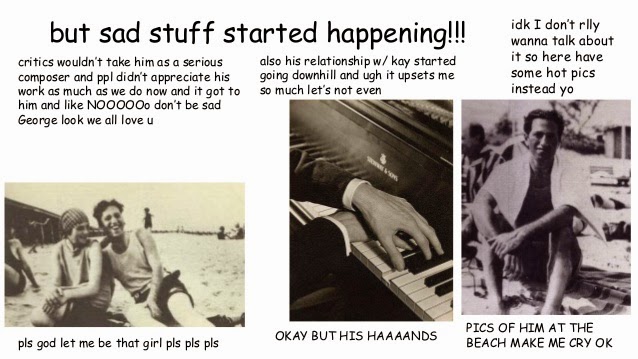 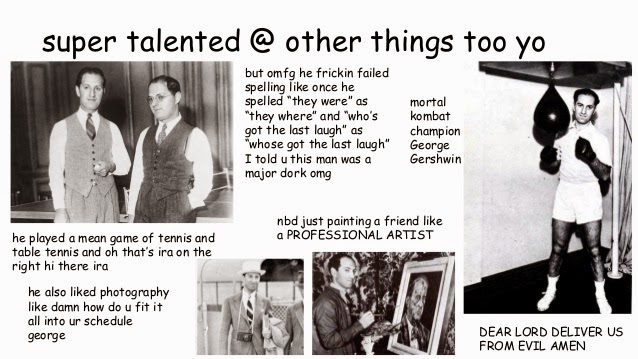 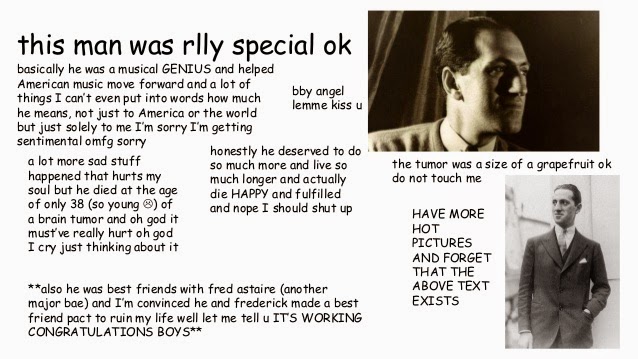 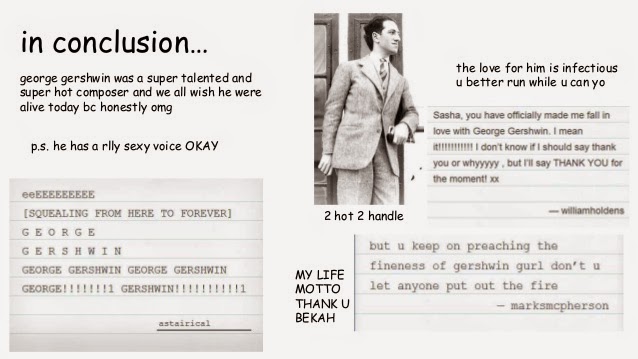 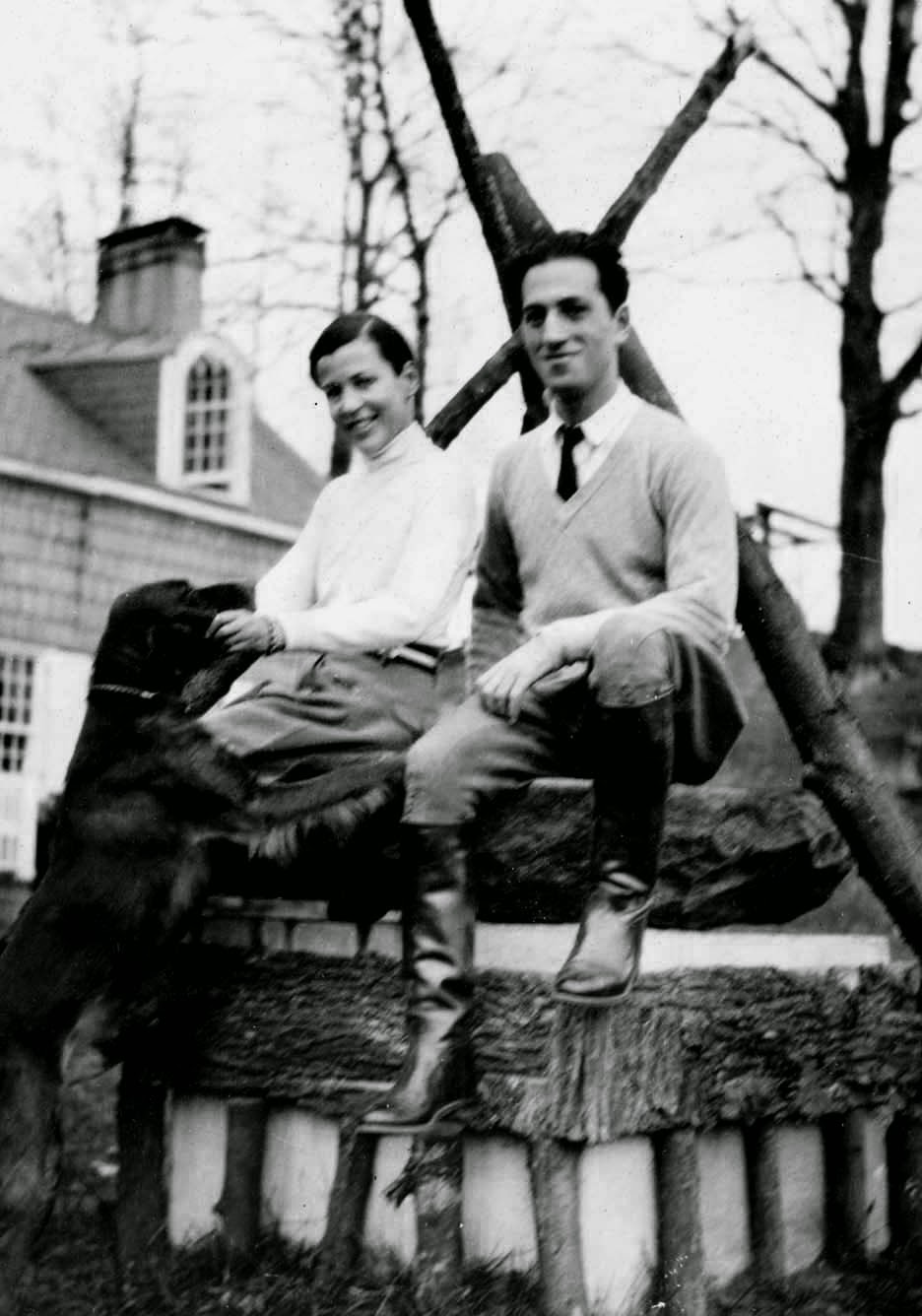 
1. a guide to George Gershwin did u mean: SEXY TALENTED STUPIDHEAD like look at that face who even gave you the right to be so handsome just stop right there okay i do not want 2 deal w/ it HELLA fine by: tumblr user astairical, who has a George Gershwin PROBLEM

2. he was born in Brooklyn and was the second of four children. his older brother ira is kinda important but omg his sis frances was also rlly hot like how??? the hot gene runs in the family apparently LOOK AT BBY GEORGE HE’S SO HOT OMFG coMIN FOR THA BOOOOOOTYY he was a WILD CHILd LIKE he would skip school and get into fights on the street and poor ira had to explain to the teachers and to his parents lmao lbr he was well on his way 2 becomin the next mob boss of new york like bang bang motherfuckers but then by chance he heard a classmate playin music and he was like “MUSIC!! YASSSSS I HAVE FOUND MY TRU CALLING” (well not really but u get the idea) he was an amazingly talented pianist (go listen 2 his piano rolls) and also a musical genius like hell yea he brought jazz into the concert halls also did I mention he was the hottest thing since Hot Pockets??? yeah man just look @ that facE decided school was a waste of time so he dropped out at 15 lmao

3. wrote some crazy-ass sheet music!!! wtf even is this supposed 2 be like George us mere mortals don’t understand it “lmaooo are u havin trouble playing my music? all y’all are basic bitches.” he became rlly rich and rlly popular bc ppl loved his music even tho no one could actually PLAY IT bc it was harder than climbing the himalayas  literally his idea of sheet music lmfao he wants ppl to play legato and then he writes an essay on not using the sustaining pedal wtf

4. the biggest dork in the history of ever in other words he would bring ice cream and then eat it all by himself omFG this man once during rehearsals for his opera the lady kept singing off-pitch and kept correcting her but he finally got so tired of it he left the theatre LMFAO went 2 paris and composed “an american in paris” and brought back actual FRENCH TAXI HORNS TO USE AT THE PREMIERE OH MY g O D but he looked super hot while doin it so like YEAH MAN tha bomb diggity yo (also what did i tell u? he looks totally gangsta here) he kicked out a piccolo player who couldn’t get on-key either after five attempts hAHA this man had so many misadventures damn it would warrant another powerpoint “yes hello my name is George Gershwin and I am better than u”

5. “Why should I limit myself to one woman when I can have as many as I want?” actual legitimate quote from this man omg he was a MANWHORE YO went out w/ every pretty girl in nyc and had countless one-night stands GET IT GEORGE GET IT but with those looks and that talent??? who could blame him or the ladies??? apparently he lost his virginity when he was nINE so his theme songs are “womanizer” by britney spears and “talk dirty to me” by jason derulo “got lipstick stains on my passport, think I need a new one ayyyy” continues 2 attract the girls even 2day (myself included obvs)

6. but his tru love was a girl called kay swift!!! the dumbz met at a dinner party and kay thought he was interesting bc he played a lot of jazz and she’d only been exposed to classical and he was talented as hell ok she was married but when did that ever stop George lmfao, her husband was a banker and went out of town a lot and George and Kay would go spend the weekend in the countryside and ride horses together, play tennis, and swim 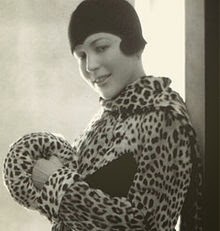 the dumbz met at a dinner party and kay thought he was interesting bc he played a lot of jazz and she'd only been exposed to classical and he was talented as hell ok se was married but when did that ever stop George lmfao, her husband was a banker and went out of town a lot and George and Kay would go spend the weekend in the countryside and ride horses together, play tennis, and swim idk how/why she put up w/ his womanizing but damn it means she loved him look at the lovesick idiots she rlly liked opera too so he took her to a lot of them. one afternoon they got bored of it so they snuck out at intermission and went Christmas shopping - he bought her bracelets and she bought him a good luck charm aw bbie he dedicated the show oh, kay! to her and that song "someone to watch over me" was 4 her also LET ME CRY they worked 2gether a lot on musical stuff, and he encouraged her 2 write popular music too. she became the first woman to write a broadway score all by herself. LIKE LET'S GO KAY!!! YEAH MANanother time they went out, they raced each other out of the theatre like lil kids and they fell out the door into the snow bc they were running w/ so much momentum and their expensive clothes were ruined and he wouldn't stop laughing omg pls don't to this to my feelings

7. but sad stuff started happening!!! critics wouldn’t take him as a serious composer and ppl didn’t appreciate his work as much as we do now and it got to him and like NOOOOOo don’t be sad George look we all love u also his relationship w/ kay started going downhill and ugh it upsets me so much let’s not even idk I don’t rlly wanna talk about it so here have some hot pics instead yo pls god let me be that girl pls pls pls PICS OF HIM AT THE BEACH MAKE ME CRY OK OKAY BUT HIS HAAAANDS

8. super talented @ other things too yo he played a mean game of tennis and table tennis and oh that’s ira on the right hi there ira DEAR LORD DELIVER US FROM EVIL AMEN mortal kombat champion George Gershwin but omfg he frickin failed spelling like once he spelled “they were” as “they where” and “who’s got the last laugh” as “whose got the last laugh” I told u this man was a major dork omg nbd just painting a friend like a PROFESSIONAL ARTIST he also liked photography like damn how do u fit it all into ur schedule george

9. this man was rlly special ok bby angel lemme kiss u basically he was a musical GENIUS and helped American music move forward and a lot of things I can’t even put into words how much he means, not just to America or the world but just solely to me I’m sorry I’m getting sentimental omfg sorry a lot more sad stuff happened that hurts my soul but he died at the age of only 38 (so young ) of a brain tumor and oh god it must’ve really hurt oh god I cry just thinking about it honestly he deserved to do so much more and live so much longer and actually die HAPPY and fulfilled and nope I should shut up the tumor was a size of a grapefruit ok do not touch me HAVE MORE HOT PICTURES AND FORGET THAT THE ABOVE TEXT EXISTS **also he was best friends with fred astaire (another major bae) and I’m convinced he and frederick made a best friend pact to ruin my life well let me tell u IT’S WORKING CONGRATULATIONS BOYS**

10. in conclusion… george gershwin was a super talented and super hot composer and we all wish he were alive today bc honestly omg the love for him is infectious u better run while u can yo MY LIFE MOTTO THANK U BEKAH 2 hot 2 handle p.s. he has a rlly sexy voice OKAY

The continuing saga of the Munsingwear Men 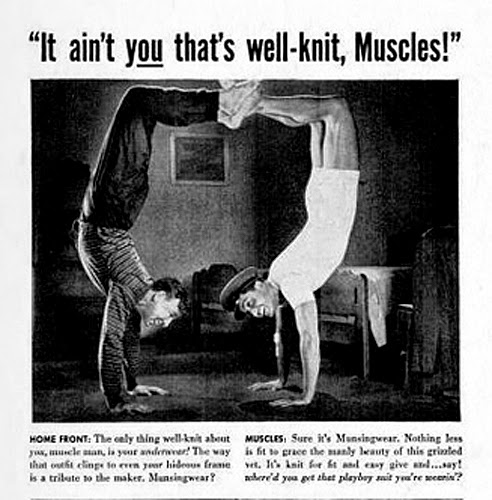 HOME FRONT: The only thing well-knit about you, muscle man, is your underwear! The way that outfit clings to even your hideous frame is a tribute to the maker, Munsingwear?

MUSCLES: Sure it's Munsingwer. Nothing lesls is fit to grace the manly beauty of this grizzled vet. It's knit for fit and easy give and. . . say! Where'd you get that playboy suit you're wearin'? 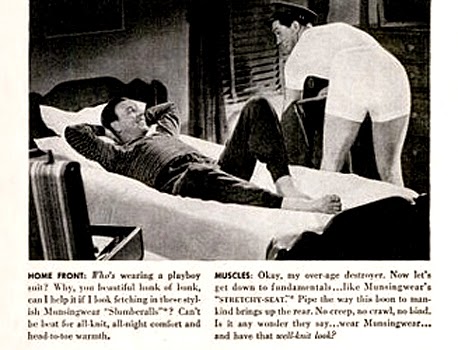 HOME FRONT: Who's wearing a playboy suit? Why, you beautiful hunk of look, can I help it if I look fetching in these stylish Munsingwear "Slumberalls"? Can't be beat for all-knit, all-night comfort and head-to-toe warmth.

MUSCLES: Okay, my over-age destroyer. Now let's get down to fundamentals. . . like Munsingwear's "STRETCHY-SEAT". Pipe the way this boon to mankind brings up the rear. No creep, no crawl, no bind. Is it any wonder they say. . . wear Munsingwear. . . and have that well-knit look? 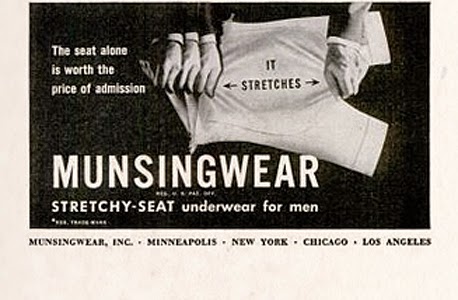 The seat alone is worth the price of admission. MUNSINGWEAR STRETCHY-SEAT underwear for men

Posted by Margaret Gunning at 9:18 AM No comments: