What can you say about a piece of music you've fallen wildly in love with? Having barely recovered from discovering the Makoto Ozone version of Rhapsody in Blue (and yes, his name really is Ozone), I now encounter one of the most rapturous, madly life-loving things I've heard in a long time. Or ever. As my Gershquest continues, now taking me through the rather lumpy and formerly scandalous Peyser biography, his music deepens and takes on new dimensions for me. I want to SING his stuff, I want to be draped across a piano in a smoky room. Would I have wanted to know GG? Who wouldn't want to know a genius?

When I try to take apart and figure out this strange phenomenon of the early 20th century, I find a lot of interlocking puzzles in three dimensions. In his mad social circle of drunken and underaccomplished codependents, he was more addictive than all the champagne in the world. He seemed glued to the piano at these events, or maybe his body grew up out of it, centaurlike. One of the most oft-quoted descriptions of GG's seductive charm came from somebody named Sam Behrman (who also wrote an agonizing description of GG's horrendous last days): "I felt on the instant, when he sat down to play, the newness, the humor, above all the rush of the great heady surf of vitality. The room became freshly oxygenated; everybody felt it, everybody breathed it."

But this piece, this Cuban overture which was largely overlooked when he wrote it: at first listening you might think, that's not Gershwin. It's just a standard rumba, Latin music writ large. But give it another chance, and another, and you'll hear the dissonances, the bluesiness, the chord progressions which could only be early 20th century (Petrushka, anyone?). He was in with those big guys, the elite composers, but that isn't what stands out here. It's the sheer heat of it, not something you expect from an urban dandy with seventeen summer suits who seldom peels himself away from the piano. Latin music informed a lot of his stuff, including the Rhapsody, but here he wades right in and is consumed. And when I listen to this, I feel an indescribable ecstasy, I want to scream with it! Largely overlooked? Were they crazy? Is everybody NUTS?

Kay Swift, one of GG's longsuffering sort-of-girl-friend-non-fiancee-longtime-lovers, believed Cuban Overture was "Gershwin's finest orchestral composition and also his sexiest. But it went all but unnoticed then, and it has never caught on." I don't know about that. The book I'm quoting from was written in 2009. When you look up the piece on YouTube, there are seemingly dozens of versions, which I have combed through to find (I think) the best. As happens to most artists, Gershwin was a victim of his own success, and once Rhapsody in Blue had everyone in thrall, they didn't really want to hear anything else.

I haven't even begun to probe the enigmatic miracle of that unit, Georgeandira, surely the most codependent songwriting team ever. I once did a line-by-line analysis of the seemingly-simple The Man I Love, a microcosm of a song that would bookend nicely with The Man That Got Away (tune by Harold Arlen, lyrics by Ira). Don't ever think you can do this stuff, because you can't. "The winds blow colder/Suddenly you're older." That's dangerous. It leaps on you like the predatory animal a great song can be. Ira was George's inverse, his shadow, his verbal self. It worked, until that great prismatic glass splintered into shards, and the universe had to do without him.

I am making my way through a long essay from a medical journal about George Gershwin's psychoanalysis and his death from an agonizing undiagnosed brain tumor. The psychoanalyst was a charlatan and a sadist who enjoyed dangling people and messing with their minds. He had sex with Kay Swift during their appointments, convincing her it was a necessary part of the treatment. Incredibly, this psychiatric fiend was convinced, and convinced everyone else, that blinding headaches, hallucinations, falling down, being unable to eat or play the piano, and having all manner of bizarre behavioural seizures was merely the result of "hysteria". For one thing, it bollixes my mind that a man could be diagnosed with hysteria - I thought that it simply didn't happen. But the real horror of it is, they killed George with neglect. By the time the medical community came to the conclusion it should have drawn years before, he was dead.  But I just had this thought now - this second - George played into it too, because for all his fiery genius, he was paradoxically a don't-make-waves sort of person, almost passive, so eager to be liked that he buried his anger and went along with whatever attitude prevailed. OK, so it's psychosomatic. Now what?

But that's for another post. Another Blingee, another George.

Posted by Margaret Gunning at 9:38 PM No comments: 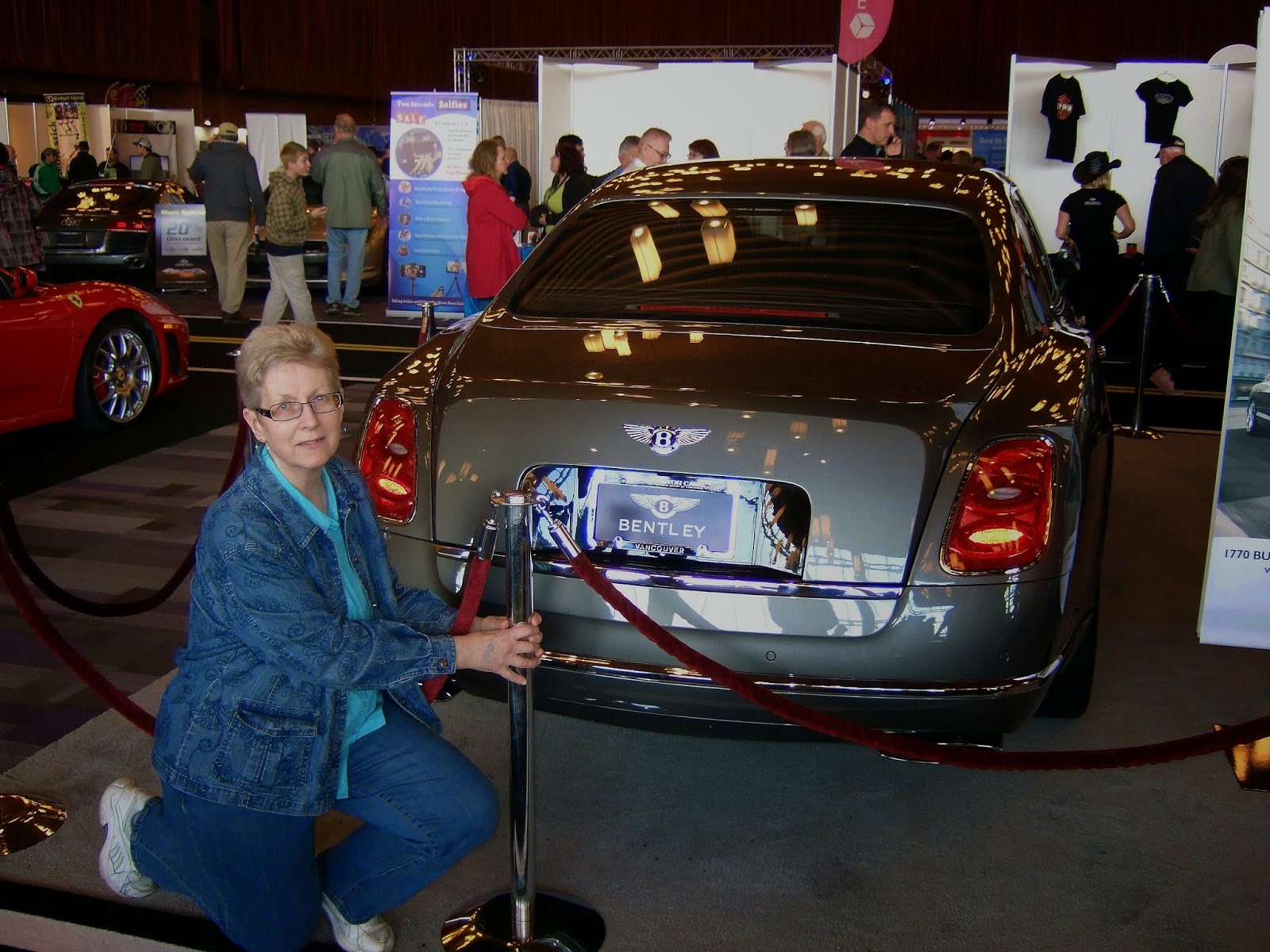 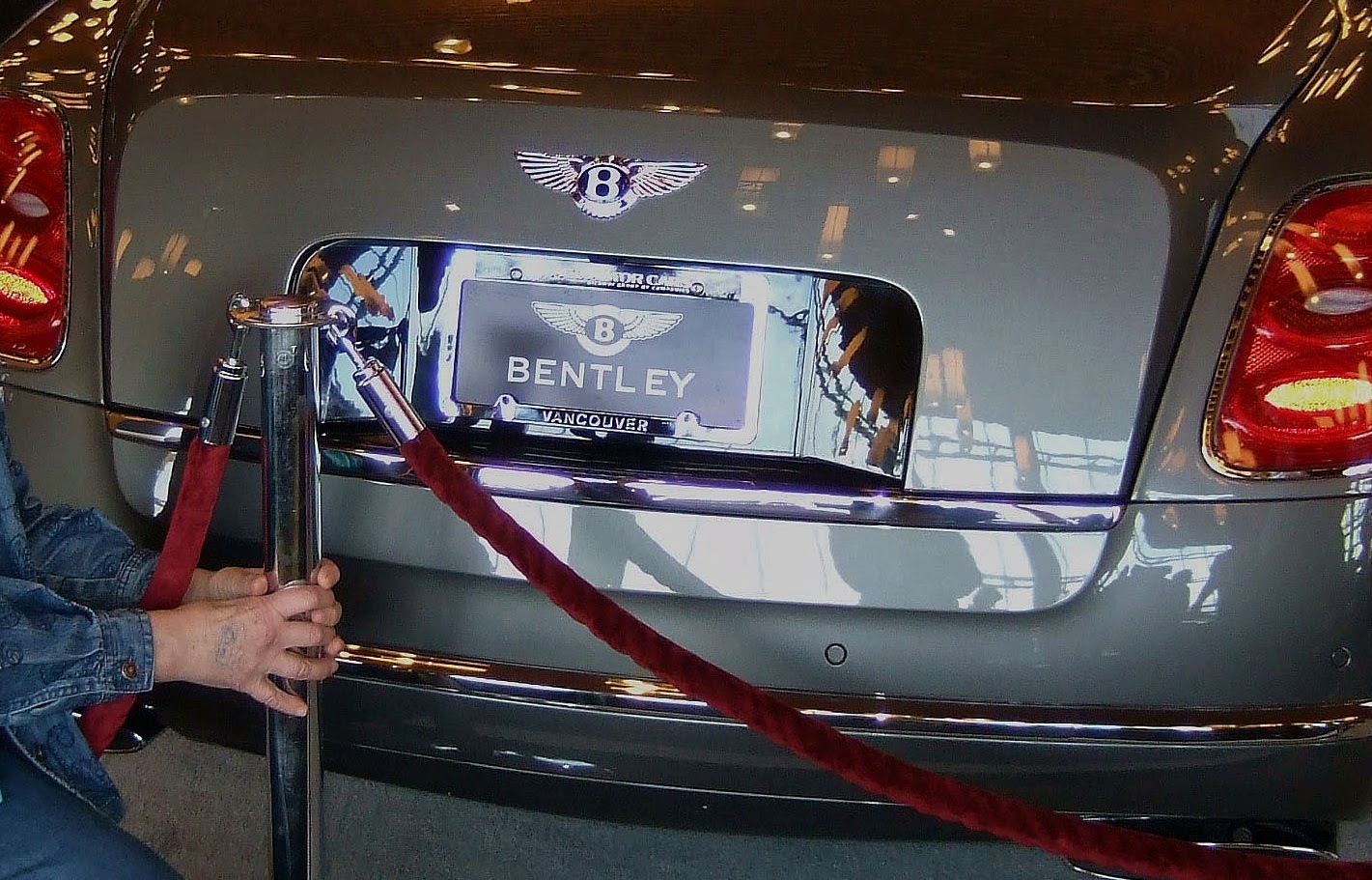 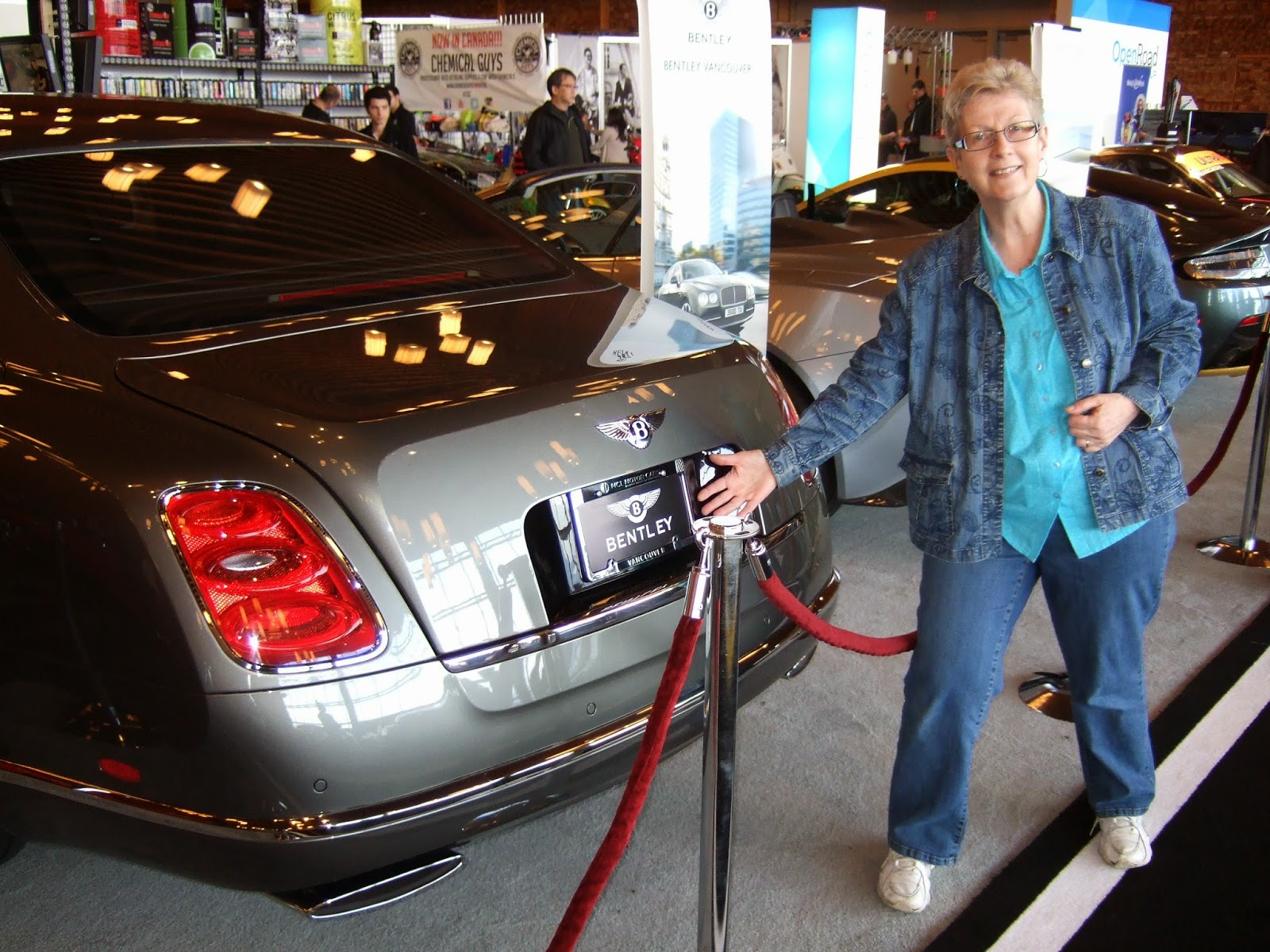 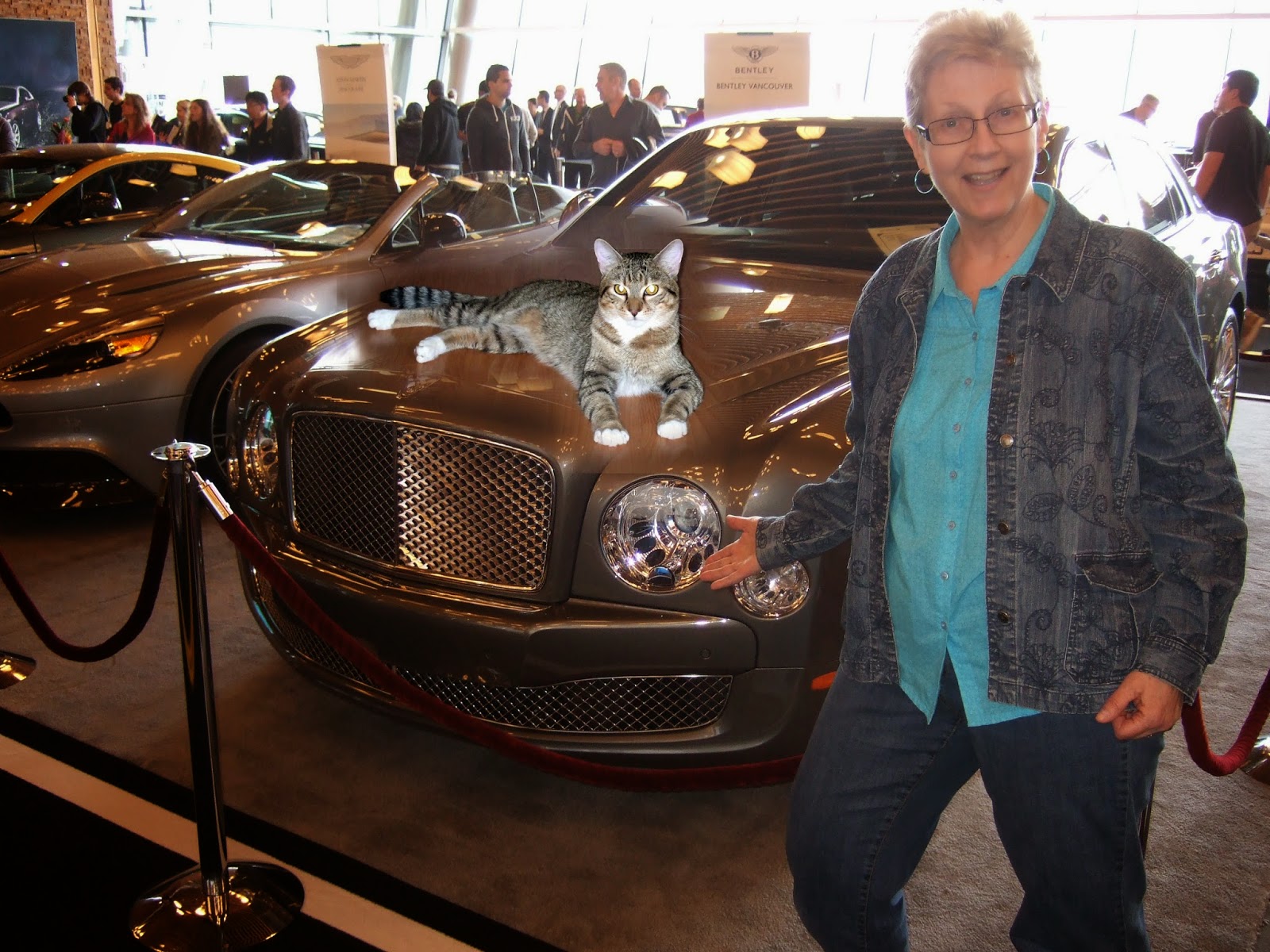 Posted by Margaret Gunning at 12:17 PM No comments:

"Get that Twain character out of my office!"


Jumping frogs and other phenomena of the literary swamp 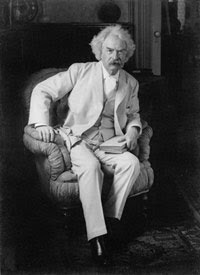 I've been on a bit of a Mark Twain kick ever since I saw a superb PBS documentary about his life a few months ago. I got a copy of the DVD, along with two massive biographical tomes, the kind you can hold in each hand to attain rippling biceps in only three weeks.

I want to reread Tom Sawyer and Huck Finn to see how much they've changed since my youth (ahem), but until then I tread deep water in these books, packed with too much information. Twain wasn't the nicest fellow, was an egotist, was moody, was often suicidal, and definitely pushed his own agenda. Good thing, too, or the following harrowing scene (which took place when Twain was still relatively young, but with a growing readership) would have erased Huck Finn from our collective memory:

"Sam, 'charmed and excited', had every reason to believe that a contract would be extended to him as soon as he walked through Carleton's door. So certain was he of this that he dashed off a private letter to his sponsor at theAlta, John McComb, in early February, boasting that he was about to 'give' Carleton a volume of sketches for publication. The paper printed a brief summary of this letter for Mark Twain's followers in mid-March - nearly a month after Sam had kept his appointment with Carleton, and been given the bum's rush.

"He never forgot it: his diffident arrival in the publisher's office at 499 Broadway, the brusque statement of the clerk that Mr. Carleton was in his private office: his admission to the great man's quarters after a long wait; Carleton's icily impersonal greeting: 'Well, what can I do for you?'

(Editor's note. This would happen to me on a good day. But wait! Here comes the best part.)

"Sam's abashed response - that he was keeping an appointment to offer a book for publication - triggered a temper tantrum from Carleton that lives in the annals of bad editorial judgement. . . Whatever the impetus, Carleton treated his speechless visitor to a vintage New York-style tongue-lashing At the end, he swept his arm around the room and delivered the coup de grace that will forever be associated with his name:

'Books - look at those shelves. Every one of them is loaded with books that are waiting for publication. Do I want any more? Excuse me, I don't. Good morning."

After this, the biographer Ron Powers cites the infamous"Whales, Mr. Melville?" (to which I add, "Scribble, scribble, eh, Miss Bronte?"). These can be lumped in with "These guitar groups are on their way out" (Beatles) and "Who's this Bob Dylan?" ( - oh, and - one of Twain's early magazine stories found an enthusiastic audience, but unfortunately the editor spelled his name Mark Swain.)
There are whole books full of "famous rejections", which are supposed to make the aspiring writer jump up from his/her bed of suicidal depression, all fluffy and flumphy like freshly-plumped pillows. It doesn't work, however, because greatness has a way of coming through no matter what. Or does it? How many Huckleberry Finns languished in drawers somewhere, only to be thrown in the fire a la Thomas Carlyle when the weather got cold?

It's too depressing to contemplate.

Man walks into a publisher's office. Disreputable-looking, shabby clothes, big intimidating cookie-duster of a moustache and untameable head of (red) hair. Obviously a bad character. Has this manuscript he thinks he can sell me, haven't looked at it yet and haven't got time. Worked as a rough-and-ready reporter out West somewhere, has nothing to say to a sophisticated New York audience. Wrote one story, something about a jumping frog, that was published all over the country, but who wants to hear about a jumping frog? This fellow seems to have a million ideas spilling out of him, and we can't have that. He'll stain the Wilton carpet. Uncouth, he is. Smells like tobacco and gin. A man's man, with feverish ideas. But the stunned look, the look of a small child who has been slapped instead of kissed, reveals him to be just another no-talent who can't take his rejections like a man.

Posted by Margaret Gunning at 10:22 AM No comments: