The quiz show that ate my brain


There's something fascinating about worsts, especially when they think they're pretty good, or at least passable. God knows how I fall into these things, but it had something to do (as most things do) with Harold Lloyd, and somehow landing on a site full of FREE old movies (and another sister site with hundreds of FREE old TV shows), and finding myself at the very bottom of the failed-TV-pilot barrel.

I quickly discovered that this had been on YouTube all along, though I was the first to leave a comment. I think everyone else was just too stunned. This bizarre thing is an attempt to cash in on the wild popularity of quiz shows in the 1950s: To Tell The Truth, I've Got a Secret, and I forget the rest. These involved people like Gary Moore and Durward Kirby making quips and holding up pieces of cardboard while a bell went DINGDINGDINGDINGDINGDING (I never could figure out if the DINGDINGDING was good or bad, but maybe that's because I was two), while Kitty Carlisle snuggled in white furs and rattled her jewellery. 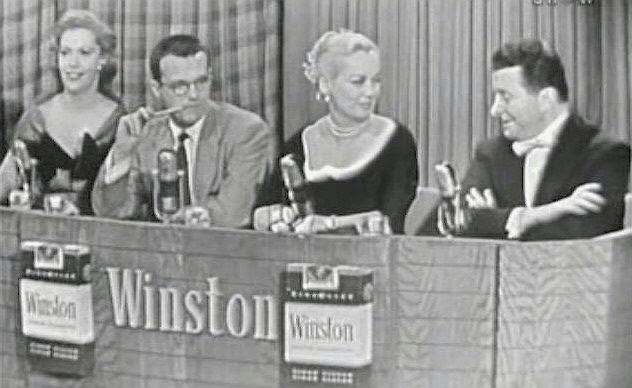 In other words, panel shows, the good ones at least, were popular, all in good fun, and even, sometimes, had a touch of class. Bennett Cerf might show up, or Noel Coward, or - oh no, not Noel Coward.

So someone - someone had an idea, an awful idea, for a quiz show that was such a mess that after three or four viewings I still can't figure out what it is supposed to be about. Really, it's about nothing, and about five minutes in, the panellists begin to realize this fact and laugh wildly and make lame remarks to cover the awkward silence. Never has a 26-minute show lasted so many years. 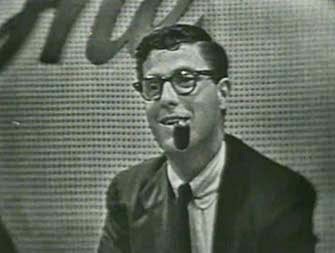 As far as I can make out, the host of the show has brought in his next-door neighbor, probably for free, so that he can function as an Artist. The Artist is supposed to draw a picture in only ten lines. He draws a line, then gives it to the first panelist who copies it, who then hands it to the next panelist who copies it, who - yes, I know it sounds pointless because it is. It is just jeezly bad, from the outset.

Eventually you end up with an incoherent mess of bad drawings with dumb captions. The panelists seem to have been chosen at random - a horse-teethed woman with an ear-shattering laugh, a guy who looks like he's straight out of an SCTV parody, a - but,  my God, who's this sitting on the end? 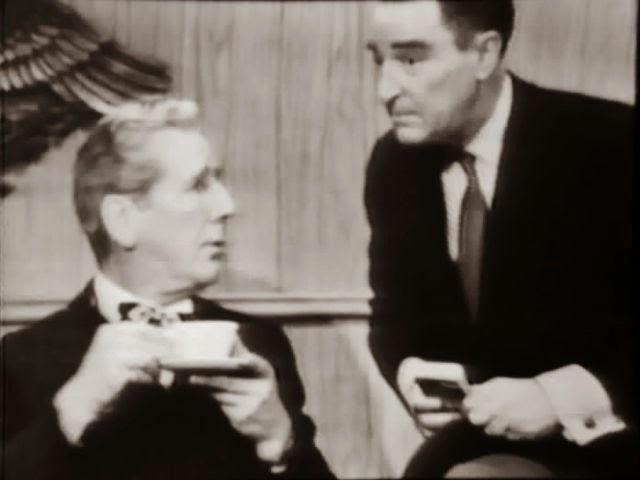 As with so many of these ancient TV treasures, there is, after all, someone on this dog of a show who would go on to be world-famous. And I'm not going to tell you who he is, so there. You have to watch. His presence seems to float, Buddha-like, above the seething swill of bad TV brewing below. He says some truly funny things that drop like shot pigeons because no one is paying attention to the budding comic genius in their midst. They're too busy screaming with fake laughter and making ugly and meaningless squiggles on sheets of paper.

It becomes truly dada-ist at the end of the show when the loser of a moderator starts yammering about how the folks at home are going to want to participate in this fiasco. Sitting there copying a line, then handing it to someone who copies a line, then. . . until no picture is produced. He displays special pads of paper the audience is supposed to buy for this purpose, which they are supposed to then "scotch-tape to the TV screen". You may scream now. 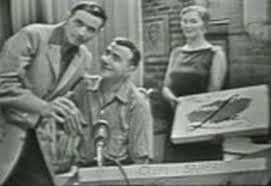 The sight of the (inexplicable - why is he there?) gum-chewing piano player, the awkward crowd standing around as if at a surreal cocktail party, and the producer - I guess that's who he is - nakedly pitching the show to sponsors in the ugliest manner possible - what can I say about this? I think it was Jackie Gleason, about whom I have mixed feelings, who hosted a game show that lasted exactly one episode. It too was about "art", but was called, I think, You're In the Picture (I'll try to find it, I'm sure YouTube has it somewhere). Celebrities had to stick their heads through holes in a fake painting, then ask panellists questions about what painting they were in - or something. Awful, awful.

At least Jackie had the magnanimity to come on the air the next night and offer an apology that lasted one hour. He felt really badly about You're In the Picture and wanted everyone to know it. That kind of candour is rare now. Whatever you do, you cover your ass. You "lawyer up". If you fail, you go around saying "there are no failures" and "failures are the only way to learn". No one picked up this pilot, and I am sure very few potential sponsors even watched it all the way through to that tacky pitch at the end. I can see them puffing away on cigarettes and watching five minutes of it and saying. "OK, Mel, we're done on this one" or something, or "Next?" I can see the panellists slinking away without saying anything, or maybe making fanning motions to each other as if to dispel a particularly sulphurous fart. I wonder if I could get into the head of that unrecognized comic genius, what he really thought of the whole mess. I have a feeling he saw it as just another gig, a way to get some exposure so that maybe, one day, he could do some real television.

Which, I assure you, is what finally came to pass.

Posted by Margaret Gunning at 11:39 PM No comments: